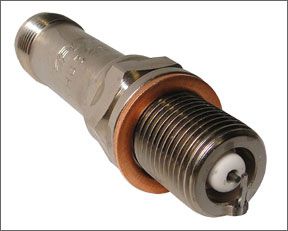 Beechcraft  F33A Bonanza
Failed Landing Gear Relay
Before the second landing, the crew selected gear down, which showed down and locked, but the crew saw and smelled smoke. The landing gear circuit breaker tripped after gear completed cycle. Inspection confirmed source of smoke was from the landing gear actuator motor and a faulty dynamic brake relay (mfr p/n SM50D7) is suspected to have caused the landing gear motor to overtravel against hard stop and smoke.
Part Total Time: 142 hours

Piper PA-28-181
Failed Main Landing Gear Fasteners
On rollout, right main landing gear collapsed and folded under the wing. Fasteners attaching gear trunion to airframe/wing failed allowing gear to exit wheelwell. Evidence indicates two lower outboard fasteners were broken or loose, allowing bolt holes in the wing spar and the trunnion to become elongated and splay materials outward of the bolt holes.  Also, a lateral attach bracket that attached to the trunnion by two bolts and riveted to the aft side of the wing spar indicated fretting corrosion at the lowermost area, another indication of movement due to of failed fasteners.
Part Total Time: 6812 hours

Slick 6310 Magneto
Stiff/Frozen Bearing
Right engine of a Beechcraft Model 58 Baron would not start. Inspection revealed the engine’s left magneto was hard to rotate due to drive end bearing failure. No other damage was found. The stiff/frozen bearing was causing the impulse coupling to be ineffective. A new magneto was installed and the aircraft was returned to service.
Part Total Time: 646 hours

Tempest URHB32S Spark Plug
Broken Electrode
While completing a 1000-hour inspection and cleaning the spark plugs, one of the plugs was found to have a loose wire electrode at its attachment to the end of the spark plug. The wire could be rotated up out of alignment with the center electrode. After rotating the electrode up two times, it came out of the area where it had been crimped onto the plug.
Part Total Time: 400 hours