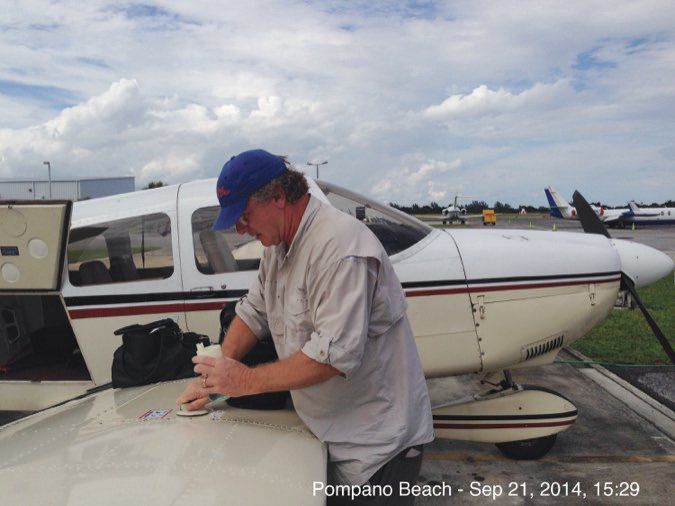 Most pilots who fly single-engine piston airplanes in non-commercial operations do not undertake formal training at annual or other intervals. Instead, they are only required to complete a flight review from a certified flight instructor (CFI) every other year to fly as pilot-in-command. For most pilots, this is an exercise to be completed with as little effort as possible. Some pilots resent the requirement while a few even dread it. This doesn’t have to be the case, however.

While it might take a little effort to find a CFI who has the flick regarding what comprises a good flight review, the end result and the value you receive might be worth it. If you want to go further and try something different in the off year, a do-it-yourself event might be an equally good approach.

Virtually all instructors and most pilots are familiar with the regulatory requirements for the flight review. The FAA’s FAR 61.56(a) specifies a two-part requirement: “a review of the current general operating and flight rules of Part 91,” plus “a review of those maneuvers and procedures that, at the discretion of the person giving the review, are necessary for the pilot to demonstrate the safe exercise of the privileges of the pilot certificate.” That’s probably one of the most enabling provisions found in the FARs. It essentially permits an instructor and client to create an educational experience tailored to the client pilot’s needs, rather than a rote flight check designed by someone else.

Unfortunately, that’s not how most flight reviews have been conducted. Typically, the instructor asks the pilot to recite Part 91 regulatory requirements and perform maneuvers straight out of the practical test standards (PTS) and, more recently, the airman certification standards (ACS) that are superseding the PTS. This approach certainly meets the letter of the law, but may not address the issues that typically cause fatal accidents. It also may not provide a review that targets the operational issues faced by individual pilots.

When the flight review requirement was enacted in the early 1970s, the FAA neglected to provide advisory material or other guidance on how to create a tailored review that addresses accident causal factors or the operational profiles of pilots. That gap was eventually addressed, and the sidebar above describes some of the guidance that is currently available.

I should point out that the official FAA policy is that it is impossible to “fail” a flight review. If the instructor determines that the person receiving the review does not meet acceptable standards, then he or she cannot provide a logbook entry on the review but should record the event as instruction received and recommend further training to that person.

You can also comply with the 61.56 requirement through other actions. These include obtaining a new pilot certificate or rating, completing a phase of the FAA Pilot Proficiency (“Wings”) Program, or meeting other requirements (i.e., those in FAR Parts 121/135 or imposed by the U.S. military).

New Thinking From The Gajsc

In fact, I have written about the real root causes of most general accidents, including those labeled as caused by loss of control. (See Aviation Safety, May 2015, “Out of Control?”) My analysis found that poor risk management—VFR into IMC, low-level maneuvering, etc.—was an often-overlooked root cause of most of them. Yes, the pilot lost control, but what events and decisions led up to that event?

The GAJSC work groups came up with dozens of SEs to address LOC-I accidents. To their credit, one of these, SE-21, called for the creation of a “risk-based” flight review. The statement of work for SE-21 specified that the community would provide information on such a review to the flight training community. As explained in the sidebar on page 5, the latest Advisory Circular does not cover risk-based flight reviews. Instead, refer to the publication, Conducting an Effective Flight Review.

A Key Obstacle: The Right CFI

Unfortunately, the FAA has put little emphasis on training CFIs to conduct a flight review, either in initial training or during the flight instructor renewal process that must be completed for instructors to renew their certificates every two years. The initial training for CFIs still heavily emphasizes rote learning of regulations, while the flight training concentrates mostly on maneuver-based events. How to teach in general is less emphasized, and conducting flight reviews is hardly covered at all in most curricula.

Not all flight instructor initial and recurrent training is as depicted in the previous paragraph. There are training organizations out there that go beyond the minimal FAA requirements and individual instructors who go beyond the minimum and try to broaden their education. Your main problem will be finding such CFIs and you may have to go way beyond your local area to do so. This could involve more expense for you to travel to them or pay them to travel to you.

In your process of “interviewing” instructors to find the right one, you may want to ask them if they can conduct a “risk based” flight review. To prevent receiving a blank stare in return, you might try educating them using the information in the sidebar on risk-based flight reviews on the opposite page.

Now that the ACS system has replaced the PTS for most certificates and ratings—and will soon cover all certificates—it becomes the de facto completion standard for individual tasks on a flight review. However, unlike an original practical test, a flight review only covers “those maneuvers and procedures that, at the discretion of the person giving the review, are necessary for the pilot to demonstrate the safe exercise of the privileges of the pilot certificate.” As mentioned earlier, this gives both you and the instructor wide latitude to create a truly educational experience, rather than a test, which the flight review is not.

In fact, I believe that an instructor who tries to conduct a flight review just like a practical test might be doing his customer a disservice. I believe it is important to determine how the pilot functions on typical missions and typical conditions, using typical procedures that may be required. It’s certainly appropriate for the instructor to introduce additional tasks into the review, such as abnormal and emergency procedures, to make it more realistic. It’s also appropriate to break away during the review if the pilot exhibits “rust” or uncertainty.

For example, if a pilot is sloppy on altitude control during turns, you may want to have him/her demonstrate steep turns to ACS standards. If at any time during the review, the pilot demonstrates numerous areas of deficiency, it would be appropriate to break away from the scenario and give some instruction.

It may seem outrageous, but it’s possible to conduct your own do-it-yourself flight review. Acknowledging that an instructor is required to administer the required 61.56 flight review every 24 calendar months, you may want a review of your skills and knowledge at more frequent intervals. Of course, it’s always acceptable to engage an instructor every year, or even more frequently. You can, however, do a pretty credible job on your own if you carefully structure a “self-review” around an actual flight you are planning. Some suggestions:

• Accomplish all the actions listed in the sidebar on the risk-based flight review. This includes full completion of a FRAT for the planned flight.

• Get deep into the pilot operating handbook (POH) for your aircraft. Review abnormal and emergency procedures and especially performance information.

• Take some extra time and do a complete “table-top” analysis of the planned flight from a risk management perspective. For example, planning a flight to a high density-altitude location? Take the time to compute takeoff distances and climb rates and relate this to the surrounding terrain.

• When you’re on your way, fly by the book and conform to recommended performance speeds, making sure to allow for varying conditions such as using lower approach speeds for your reduced gross weight at landing.

• After you land, grade your performance. Was it subpar in any areas? Maybe now’s the time to engage a CFI for a tune-up.

Remember that a flight review, no matter who conducts it, is a great opportunity to challenge yourself and expose complacency and subtle changes in your skills. I’d rate that as an opportunity rather than a nuisance any day of the week.

The flight review requirement became effective in the 1970s. Within a year or two, industry guidelines became available. At the time, FAA practical tests were administered using relatively vague flight test guides that weren’t anywhere near as comprehensive as the PTS that replaced them, let alone the newer ACS documents.

The FAA didn’t get around to creating flight review guidance material until the late 1980s. At the time, I was working in FAA headquarters and took it upon myself to create Advisory Circular (AC) 61-98, which provided guidance on how to conduct not only the flight review, but also the instrument proficiency check and other currency requirements. I later authored the AC 61-98A first revision of that document. That was in the days before it took a village and oodles of contractor dollars (and years) to get anything done in the FAA.

The current version of this AC is 61-98D, issued in April 2018. This new version still says nothing about the “risk-based” flight review suggested by the GAJSC (see the discussion in the main text below). However, another document is available on the FAA web site that does discuss risk management on the flight review. “Conducting an Effective Flight Review” can be retrieved fromwww.faa.gov/pilots/training/media/flight_review.pdf

The general aviation community has also been active in producing flight review guidance. This includes organizations such as the Aircraft Owners and Pilots Association (AOPA) and pilot training course vendors. Some of this material is directed at CFIs while other products are directed toward pilots receiving a flight review.

What Is a “Risk-Based” Flight Review?

How to conduct (and receive) a risk-based flight review is worthy of its own article, so here are just a few guidelines to help. In my view, a risk-based review should mimic a typical operational flight that you might make, whether it’s a local day VFR flight for pleasure or a long cross-country flight for business or personal transportation.

You should be able to demonstrate to the instructor how you manage the risk on those flights, including both the operational risk inherent in the flight and the additional procedures, maneuvers and other elements added by the flight review itself. Key elements include:

What about breaking away from the flight review scenario in-flight to conduct maneuvers? This will probably be required to some extent, but most critical maneuvers can be built into the review scenario itself and a good instructor can tell within minutes whether a pilot doesn’t meet basic stick and rudder standards.

Robert Wright is a former FAA executive and President of Wright Aviation Solutions LLC. He is also a 9800-hour ATP with four jet type ratings, and he holds a flight instructor certificate. His opinions in this article do not necessarily represent those of clients or other organizations that he represents.