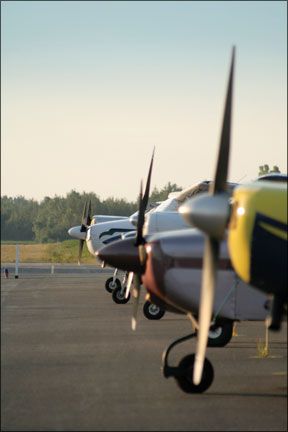 Fast-forward to 2008. According to AOPA, the average piston-powered general aviation airplane is more than 35 years old. Leisure suits, my high school graduation and the end of mass production of light propeller airplanes-1978 to 1979-were that long ago. Unlike when I bought my Cessna, now its not unusual at all for a light airplane to be 40 years old; 50- and even 60-year-old piston airplanes are increasingly common. Are airplanes this old still safe? What does it take to safely operate aging airplanes?

Aircraft age appeared on FAAs radar screen, as do many issues, as a result of a spectacular accident. On April 28, 1988, after over 89,000 pressurization cycles, an 18-foot section of cabin roof ripped from an Aloha Airlines Boeing 737, killing a flight attendant and severely injuring several passengers. Investigation revealed metal fatigue, aggravated by an unusually high number of pressurization cycles on Alohas short-haul flights, was the likely cause.

A genuine concern for safety (and significant Congressional pressure) caused FAA to create policies relating to aircraft age. These airline-based policies have trickled down to light business and personal aircraft, where looser maintenance regulations and lack of flight-by-flight operational data reporting to FAA actually increases regulators concern about age-related issues.

But metal fatigue and corrosion are not really “age” specific. Theyre more closely related to aircraft use patterns, proper maintenance (detecting and correcting problems, and avoiding “mechanic error”), and the physical environment in which the airplane has been stored. Calling fatigue an “aging aircraft issue” does not distinguish between a show-quality 1947 Model 35 Bonanza that has been flown weekly and hangared in Arizona since new, and a mid-80s F33A that sits outside, unused, for months at a time in Florida. Nor does it consider the possibility of illegal high-G aerobatic flights. If “age” alone is the problem, then the 1947 airplane would be significantly more hazardous. But in which would you rather fly your family?

The issue is more correctly a function of “fatigue exposure.” Calendar age alone has very little to do with fatigue in metal airplanes. Metal fatigues because it flexes and bends. Consider a metal coffee can: Stored inside and protected from corrosion, it retains its strength regardless of age. If bent repeatedly, however, cracks may form along the wrinkles, reducing the cans overall strength. If the can is allowed to rust itll eventually get brittle enough to break by hand. Age alone has essentially nothing to do with the strength of metal over time. The Aloha 737 broke apart in flight when other, even older 737s continued to fly safely, because short-haul routes in Hawaii meant the fuselage was pressurized and depressurized (and consequently, flexed) far beyond the average number of times for an airplane of its calendar age or even the number of flight hours. Alohas fated Boeing had a much higher fatigue exposure.

Airplanes flown in high-stress operations (like training, mountain flying or pipeline patrol), or near the limits of their design envelope (routine operation at high weights, or frequent strong turbulence encounters) flex more and therefore rack up more fatigue exposure for the number of hours flown. There may appear to be a correlation be calendar age and fatigue, only because that airplane gets more fatigue exposure per calendar year than others. Improper operation with respect to airplane limitations, including excursions beyond approved maneuvers and weight and balance limitations, has been shown to further accelerate fatigue accumulation compared to mid-envelope use of the airplane.

Corrosion is a function of airplane storage (inside or out), humidity from physical location (e.g., Florida vs. Nevada), quality of paint preparation, proper preparation of areas where dissimilar metals are joined (example: proper replacement mounting hardware, or adding aftermarket ferrous static wicks to magnesium surfaces) and frequency of operation (lesser-flown airplanes get damper longer, and corrode more quickly).

It would be great if industry could develop an objective “fatigue standard” that ranks all these factors and comes up with a “potential fatigue exposure rating.” When that fictional rating reaches a certain point, additional inspection requirements kick in to detect fatigue damage before it becomes critical to the safety of flight. Unfortunately no such standard exists-so its up to aircraft owners and their mechanics to proactively look for signs of fatigue.

If it were valid that airplanes become less safe as they age, its logical that confirmation would come from the NTSB mishap record. At the FAAs Aging Aircraft summit in March 2006, then-Manager of AOPAs Government and Regulatory Affairs Luis Gutierrez reported otherwise. “If [aircraft] age were a real issue,” Gutierrez said in his presentation on maintenance-related aircraft accidents, “and given that the average age [was then] about 33 years old, we should have seen a spike in [maintenance-related] accidents, and were not seeing that. Were actually seeing [the number of mechanical accidents] coming down.” Mechanical failure has been a factor in about 16 percent of all reported accidents since 1994 according to AOPA, so the “spike” that would confirm that calendar age alone is a factor in aircraft safety simply is not there. The myth has been busted.

The National Institute for Aviation Research (NIAR), at the Wichita (Kan.) State University, runs an Aging Aircraft Laboratory that looks very closely at airframe fatigue. The lab has completely torn down several high-time piston aircraft to map areas of fatigue. Each airplane had been engaged in highly documented operations under FAR Part 135, so there was at least some way to correlate evidence of fatigue against use patterns. NIAR learned the fatigue it found was almost universally instigated by improper maintenance practices and errors in aircraft inspection and repair. Age alone was not a factor in fatigue damage except that more inspections and repairs over time meant a greater chance of maintenance error.

With every rule theres an exception. NIAR determined electrical wiring is the only calendar age-sensitive component in aircraft. Wiring does wear out over time, so electrical components should be replaced based on calendar age for proper function and to prevent a fire hazard. Other items such as fuel and oil lines, bladder tanks and seals might also be time-limited, but even these are heavily dependent on whether the airplane has been stored inside or out, whether a line or tank is empty (exposed to air internally) for long periods, and how frequently the airplane is flown.

parts. Some manufacturers have been gone for decades, while others may still be in service and even produce updated versions of classic airframes, but often there is little parts commonality between “old” and new models. Cessna is a significant exception in that it still produces “legacy” parts, and some airplane types have parts support from third-party vendors. But regardless of the source, building parts in 2008 assures the cost is disproportionate to the typical purchase price of a 40-, 50- or 60-year old airplane.

For example, I recently spoke to the owner of an early Bonanza who was dismayed hed put over $55,000 into control surface reskinning and other sheet metal repairs, then found the VRef value of his airplane is around $32,000. Anothers vintage, electrically-driven propeller failed inspection; there simply are no remaining replacement parts, and the only option to keep the $40,000 airplane flying is a $25,000 modification to a hydraulically operated propeller. And anyone who puts the latest avionics in his or her airplane knows theres no way theyll ever recoup their investment if the airplane is sold or totaled in an accident.

In the heyday of light plane production most FBOs were aligned with a specific aircraft manufacturer, and its mechanics worked on nothing but those types. Specialists were everywhere. As airplane sales severely declined FBOs had to diversify; over many years were left with very few true experts on any one model of aircraft.

Aircraft owners groups (so-called “type clubs,” because they represent a “type” of aircraft) have filled some of the gaps by identifying those remaining experts. Unfortunately those experts are few and far between-for a very common 1950s-era engine, for instance, the only real experts are in Illinois and southern California, a real challenge for an owner in Louisiana or Kansas (or Australia).

Some type clubs further fill the gaps by offering airplane inspection programs that focus on issues not well known by mechanics in the field, and areas the type club experts have found to be common items of concern. These supplement annual inspections and give owners specific information they can take back to their mechanic to improve the overall maintenance of the airplane. Type clubs are listed in a table of associations at

Gradually the FAA, manufacturers and owners groups have developed the concept of the “super-annual,” an extended inspection that goes into far more detail than even the annual inspection. A super-annual is voluntary, an in-depth look at the airplane and its documents at significant airplane time-in-service milestones, such as 5000, 7500 and 10,000 hours total time (and beyond), or alternatively at 20, 30 and 40 years in service (and more). FAA suggests owners groups develop super-annual inspection checklists, and recommendations for proactive overhaul or replacement of items with typical failures closely correlating to time in service.

By definition, the super-annual would be conducted by a true expert in that specific model airplane; for most owners this means a trip to a specialty shop that may be quite distant from their usual mechanic.

Numerous accounts of the Aloha Airlines accident state a passenger claimed to have seen a crack aft of the passenger door when boarding the aircraft, but did not report his observation until after the incident. Whether this is true or not, it points out the cardinal rule of flying any airplane, and certainly those with a greater potential for fatigue exposure-look carefully for anything unusual, and bring your concerns to the attention of a mechanic before flight. Its an unacceptably deadly risk to fly an airplane with a known fatigue issue, and none of us needs additional regulation based on airplane age alone, and not an assessment of an individual airplanes fatigue exposure.

I sold my Cessna 120 in 1992, when it was 46 years old. My trusted mechanic advised me it was getting near time to pull the wings and tail to inspect what could not be seen during annual, rewire the entire electrical system and generally restore the whole aircraft. Without time or money to do a restoration at the time, I made the hard decision to sell NC89954 to someone who did.

I regret letting the little Cessna go, but now at 62 years since coming off the production line its still flying…testimony to what it takes (time, money, inspection, parts availability and mechanical expertise) to safely fly an “aging” aircraft.