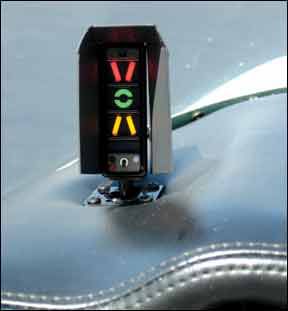 Aerodynamics 101 teaches us about angle of attack and that all wings have a critical one at which they will stall. Afterward, were treated to a discussion about accelerated stalls and how the airplane will enthusiastically stop flying at an airspeed sometimes well above its straight-ahead stalling speed. Were also taught about stall-warning systems and how they are designed to alert us when were approaching that critical angle of attack.

But there are times-to extract maximum performance from the airplane, for example-when we intentionally need to be near the stalling critical angle of attack. Other times, like when performing low-level maneuvers, we want to establish an angle of attack providing the greatest lift for a chosen speed or configuration, The stall warning is next to useless for these latter occasions-it only alerts us when it might be too late. Instead, were left to fly the airplane at a recommended speed, attitude and configuration to obtain the desired performance. But is “merely” establishing a speed, attitude and configuration the best way to achieve the desired performance? Is there some way to know during the maneuver how close we are to the optimum angle of attack? Turns out there is.

The wings angle of attack-the acute angle formed between the chord line of an airfoil and the direction of the air striking the airfoil-is one of the principal factors determining how much lift is generated. At cruising speeds, this angle is relatively low and when descending it may be a negative value.

But when we slow the airplane, less lift is generated and the angle of attack (AoA) must increase to remain in straight-and-level flight and balance out the lift vs. weight equation. Generally, the trained pilot knows to coordinate AoA, by increasing back pressure, thereby resolving the imbalanced equation. According to the FAAs Pilots Handbook of Aeronautical Knowledge, FAA-H-8083-25A (PHAK), “While the aircraft will be flying more slowly, it will still maintain level flight if the pilot has properly coordinated thrust and AoA.”

Thanks in part to airflow over the wings generated by the propeller(s), pilots know an airplane will fly more slowly-or wont stall at as low an indicated airspeed-with the power on than with it off. But what we dont know-and theres usually no way for us to know-is how far away from the wings critical AoA we are on a given day, with a given cabin loading and at a given speed. Of course, the idea here isnt to get close to the stall; instead, we want to avoid it, while maintaining controlled flight. Often that means flying at a speed below cruise and well above stall.

Another problem with using airspeed alone to identify how far above stall we are flying involves inherent errors in the airspeed indicator itself. Yes, the instruments fixed position errors-those caused by the air flowing past the static port(s) at a speed different from the aircrafts true airspeed-should have been identified and corrected during the certification process. But other errors can creep in, one example of which is the variable position error uncoordinated flight can produce.

The PHAK, again: “[A]s the aircraft is slowed, the decreasing velocity requires increasing the AoA to maintain lift sufficient to maintain flight. There is, of course, a limit to how far the AoA can be increased, if a stall is to be avoided.

“All other factors being constant, for every AoA there is a corresponding airspeed required to maintain altitude in steady, unaccelerated flight (true only if maintaining level flight). Since an airfoil always stalls at the same AoA, if increasing weight, lift must also be increased. The only method of increasing lift is by increasing velocity if the AoA is held constant just short of the critical, or stalling, AoA.”

Finally, stall speeds computed and marked on the airspeed indicator-at the bottom of the green and white arcs-presume were in straight and level flight. Thus, theyre not a lot of help when, for example, were maneuvering in an airport traffic pattern and trying to avoid getting too close to the slower airplane ahead of us.

Thanks, again, to the variables of weight, temperature, altitude and bank angle, the speed at which the airplane will stall isnt really available to us. But the AoA at which it will stall is not only available, its a constant. If only we had some way to measure AoA and tell us how close to its critical value we are!

The solution is an AoA indicator, a device presenting the pilot with information on how far or near the wing is to its critical AoA, or “alpha.” The FAA has known the importance of AoA instrumentation for decades, but only recently have low-cost modern electronics become available to do the job in light aircraft.

Long ago, and far away, on page 46 of the 1964 edition of the FAAs Flight Instructors Handbook, the agency stated, “…unfortunately, a low-priced affordable Angle of Attack Indicator is not yet available for General Aviation usage.” Clearly, the FAA would have enthusiastically encouraged installing AoA instrumentation in training aircraft back then, and was publicly lamenting its affordability. Today-47 years later-the physics underlying that positive endorsement by the FAA remain equally valid while the cost of reliable AoA instrumentation has plummeted, at least in real terms.

The FAA guidance for stall warning devices has never said a stall warning has to be too-late or inadequate warning. There is absolutely nothing in FAA guidance preventing a better or earlier stall warning from being invented or installed…especially when its a secondary, fully-independent supplemental system.

Consider this from Flying magazine Contributing Editor Robert Blodgett in November 1971: “Stall warning devices are…binary or On-Off devices that give the pilot no indication whatever on how close his wing is to stall…one or two degrees [of angle of attack] below stall, a [stall warning device] is still speechless, mute. It is at its most awkward, tongue-tied phase just when the pilot needs it most….”

To highlight the need for enhanced stall-warning systems and AoA indicators, lets look at recent statistics on stall/spin accidents. The AOPA Air Safety Foundations 2009 Nall Report-an excellent resource for related data-states calendar year 2008 “stall/loss of control” accidents account for over two-thirds of all maneuvering accidents. Almost all occurred in very light aircraft (very few were retractable singles; none were twins) and the vast majority (75 percent) of the accidents were fatal. Total deaths were 45, plus eight seriously injured.

In descent/approach accidents, the same pattern holds true. A few retractable singles and twins were involved. Sixty-three percent of “stall/spins” were fatal accidents, with a total of 25 deaths, plus four seriously injured. Of course, those of you reading this magazine are immune to accidents arising from low-level maneuvering and resulting in a stall/spin, right?

If you think a low-level stall/spin accident cant happen to you, then ask why it is that neither training nor great experience are sufficient in every case. Review the sidebar on page 5 and pay particular attention to the table listing the types of pilot certificates involved in such accidents. Note the proportion of airline transport and commercial pilots, along with flight instructors. After that, consider these additional facts from the AOPAs 2009 Nall Report:

“An instructor on board is no guarantee. In reviewing 44 fatal stall/spin accidents from 1991-2000 and classified as instructional, ASF found that a shocking 91 [percent] (40) of them occurred during dual instruction, with only [nine percent] (4) solo training flights….”

If you never plan to fly slow, close to the ground, then you may not wish to consider installing an AoA indicator. Of course, flying slowly and close to the ground is something we do every time we land or take off. The stall warning system will only tell us a stall is about to happen. By then, it might be too late.

Fred Scott flies his King Air 90 Blackhawk out of Virginias Shenandoah Valley. He asked us to emphasize that neither he nor anyone associated with his project have any financial interest in any AoA company or products.