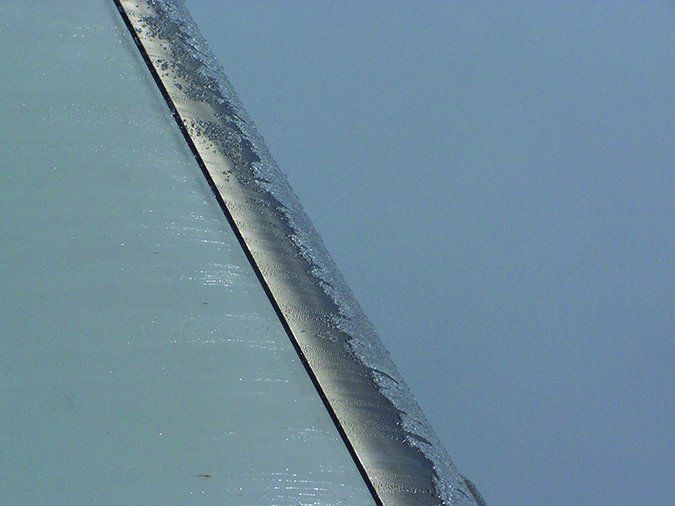 As spring in the Northern Hemisphere tries to poke through the ice and snow winter is leaving behind, it’s tempting to think the calendar alone eliminates the threat of airframe icing. The fact is we can find icing in any season; we just need an airplane that can climb high enough to get us in freezing temperatures during the summer months. Depending on where your operations may take you, airframe icing can be a reality 12 months out of the year, or only a handful. If you’re lucky enough to be flying something approved for flight in known icing, you may not worry too much about it. The rest of us do, and actively look for ways to avoid the cold, hard, heavy stuff when it’s likely to be a factor.

There was a time not too long ago that a complete weather briefing for a cross-country flight into possible icing was a lengthy, detailed affair, drawing on multiple resources, usually expressed as text requiring deciphering, and involving at least one telephone conversation with Flight Service. To understand the briefing and the likelihood of airframe icing, one needed to pore over reams of observations and forecasts, sample winds aloft projections for temperatures at altitude and plot the position of icing Airmets. The tools we have today make this task easier and perhaps more detailed, but no less important. Then as now, there are certain things to look for, to avoid and to keep in mind.

To highlight what to look for when planning a flight where icing is possible, we fired up our iPad’s electronic flight bag (EFB) app and punched in a proposed flight from the Capital City Airport (KCXY) in Harrisburg, Penn., to the Albany (N.Y.) International Airport (KALB). That route includes some minimum en route and vectoring altitudes in the 5000-to-6000-foot range. It also affords plenty of alternatives for diverting—or even turning around—if we start picking up ice.

Presuming you obtain something approaching a standard weather briefing, you’ll likely start with adverse conditions. This is where you may find an Airmet covering your proposed route and time, including advisories for mountain obscuration (Airmet Sierra), icing (Airmet Zulu) and turbulence (Airmet Tango). Telling our EFB where we are and where we want to go, plus adding an overlay for the Airmet Zulu is always a good first step when such advisories are about. In this case, our proposed route begins outside the Airmet’s boundaries, but we’ll be pretty much in its center by the time when get to ALB. The planned route and location of Airmet Zulu are depicted in Figure 1.

Looking at the Airmet’s details, we see its base is at the surface and it extends to 11,000 feet msl. It will be in effect during the period we intend to be flying through it. So it applies. That doesn’t necessarily mean we’ll encounter icing, however. While airframe icing can occur in visual conditions, it’s rare. More likely is for ice to form on the aircraft as we fly through visible moisture: a cloud, fog, precipitation or some combination. A quick check of pilot reports brings up a couple of Pireps for icing, but they’re well east of our planned route and at higher altitudes.

Why is that important? Two reasons: First, weather in this area generally moves from west to east. If there’s icing east of our planned route but none to the west, and the flow continues its usual west-to-east movement, we can be reasonably assured no additional icing will move into the area and across our planned route. Of course, the absence of an icing Pirep doesn’t mean there’s no ice. It could mean a crew was too rattled by an extreme icing encounter to file a Pirep. So additional sleuthing is needed.

One tool we can use is cloud base reports, taken from the various Metars reported along and on either side of our planned route. Figure 2 is a screenshot of our route and the Airmet Zulu overlaid with reports showing cloud bases. Interestingly, no stations within a few miles either side of our route are reporting a ceiling, which means we might be clear of clouds (i.e., visible moisture) at altitude. Since clouds/visible moisture can exist without there being a ceiling, this data isn’t foolproof. But we can use it in conjunction with other information to get a literal picture of what we might encounter.

One of those additional data points is satellite imagery. In the daylight hours, satellite data will give us some idea of the cloud density to expect along with the extent of its coverage. At night, infrared is used to present a different view. Both can tell us what to expect in the way of cloud cover, but we’ll likely need to go to the soon-to-be-discontinued area forecast’s text and/or its replacement, graphical weather products, for the details. This data will tell us the expected cloud bases and tops, and from there we can make a determination of whether our planned route and altitude will put us in clouds or whether we can find an altitude at which we’ll be in the clear.

Even if there are clouds along the route, they may not be cold enough to freeze anything. Figure 3 shows surface temperatures (in centigrade) along our route. It’s clear from this data that the freezing level is at the surface all along our route. If these data points showed above-freezing temperatures, we’d also want to consult winds aloft forecasts to determine what the temperature is projected to be at our cruising altitude. It’s always fair game to avoid ice by staying below the freezing level.

The definition of what constitutes “known” icing—as in whether an aircraft is certificated for flight in such conditions—has changed over the years. In 2009, after industry pressed for it to resolve conflicting and outdated definitions present in both NTSB enforcement case law and its own guidance, the FAA published a policy statement on known icing in the form of a letter.

In it, the agency referred to the Aeronautical Information Manual (AIM), paragraph 7-1-22, the text of which is reproduced at right. Basically, “known” icing is that airframe icing a pilot observes on his or her airplane. The 2009 policy represented a shift away from parsing forecasts or adverse weather advisories, noting in part that “such forecasts may cover a large geographic area or represent too long a span of time to be particularly useful to a pilot.”

The 2009 letter went on to note, “Pilots should carefully evaluate all of the available meteorological information relevant to a proposed flight…. If the composite information indicates to a reasonable and prudent pilot that he or she will be operating the aircraft under conditions that will cause ice to adhere…then known icing conditions likely exist.”

Depending on what weather briefing tools you use, there may be other options, including the U.S. National Weather Service/National Oceanic and Atmospheric Administration Aviation Weather Center web site. Among its products is a page dedicated to icing forecasts, Sigmets, pilot reports and projected freezing levels. The site offers some rather slick tools, which integrate various data and organize it by time and altitude. In fact, time and altitude are two of the best tools pilots have when it comes to finding (avoiding) airborne icing conditions. Using them is rather simple: If your weather data show a strong likelihood of in-flight icing at the time and/or altitude of your proposed flight, don’t go there. Some of the NWS/NOAA tools make that child’s play, but we’ve found them cumbersome to use on a tablet.