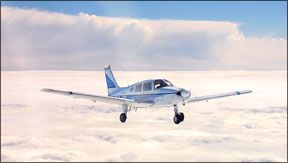 I love clouds; I always have, even as a child. When I learned to fly, I came to understand what they could tell me-as well as what they could do to me. Then, as I earned the thin suit of armor we call an instrument rating, I could not only look upon clouds from my new perspective, I could get up close and personal with them.

Soon, I learned getting above them offered the best of many worlds, including greater visibility, better weather, a smoother ride and more advance notice of challenging weather ahead. But I also learned getting and staying on top of a cloud deck can put you someplace youd rather not be, even with an instrument rating.

A cloud is really nothing more than a visible mass of condensed water droplets or ice crystals suspended in the atmosphere. Typically, billions of other droplets or crystals must form before clouds become visible.

Most water droplets are formed when water vapor condenses around a condensation nucleus, a tiny particle of smoke or dust. In supersaturated conditions, water droplets themselves may act as condensation nuclei. The condensation occurs when the air is cooled below its saturation point. Of course, this happens when air comes into contact with a cold surface, when its cooled by radiation or by adiabatic expansion (rising). See the box below for more examples of when and how clouds can form.

For our purposes, its important to remember clouds tend to grow upward when it gets warmer, for example, as the day progresses. For those of us flying non-turbocharged aircraft, and those without on-board oxygen, we can be forced to deviate around higher and higher build-ups. On a hot summer day, the rate of growth can easily exceed the climb rate of most civilian aircraft. If the clouds catch up to you-or your airplanes climb rate isnt as good as the clouds-blundering into convective weather is a distinct possibility. For just about any trip worthy of the name, embarking on a cross-country flight usually means youre going to see changes in cloud formations, unless youre cruising through a big fat high pressure area.

Why Get On Top?

Above, we touched on some of the reasons for getting and staying on top: The air is clearer and the ride is smoother. But there are sound operational reasons, also. For example, the clearer air, of course, means improved visibility and that translates to an improved ability to spot other traffic. It also enhances our ability to avoid convective buildups in the summertime. Since its usually a lot cooler the more altitude we gain, flying on top in the summertime during “three-H” conditions-when its hazy, hot and humid-offers real operational advantages versus slogging it out down low.

Also, and especially on the East coast and near large cities, smoke, haze and smog can drastically limit flight visibility. In the summer months, haze can easily top 10,000 feet back east.

Another reason to get on top might be to catch or improve a tailwind. Generally, the more altitude we gain, the stiffer the winds. When the wind happens to be blowing us toward a far-away destination, climbing as high as we want could easily slice an hour or more off our no-wind en route time.

And, as much as we instrument pilots might refuse to admit it, the idea of spending all of our flight in a cloud is boring, no matter how much it can add to the “actual instrument” column in our logbooks. And, even with an autopilot, its fatiguing. Much better to get on top of the cloud deck-or even between layers-and relax a little. Besides, we should rest up a bit so were alert for the approach to minimums at our destination.

A final reason to get on top, especially during the winter months, can be to escape the icing conditions in the cold, moist clouds below. In the airplanes most of us fly,

the ones equipped only with a warm pitot tube, fretting about the ice were accumulating down low isnt worth it. When ice is present in lower clouds but its clear or between layers above, getting on top can offer the best operational solution available, consistent with a clear understanding of where the ice is and where you might find more of it when letting down.

What To Look For

Of course, theres no free lunch; what goes up must come down. Your mileage may vary and past performance is no guarantee of future results.

Even if instrument-rated and flying a well-equipped airplane, choosing to operate on top can result in getting trapped up there when, say, an electrical system failure or some other mechanical problem occurs. To those of us flying a single on top, an engine failure when on top is much more of a problem; even when the visibility is good under the overcast, high terrain and/or low ceilings drastically reduce the chances for a successful outcome. To avoid being trapped up there in the sunlit splendor, remember:

Always get a comprehensive preflight weather briefing. Look for (or listen for) mention of layers in terminal forecasts. If its 5000 scattered and 10,000 broken all along your route, fine. If its 3000 scattered, 6000 broken and 9000 overcast, a front is likely to be nearby.

VFR-only pilots should look for (and must have) surface reports and forecasts giving VFR beneath the lowest cloud layer, which must be no lower than the 1000-foot VFR ceiling minimum (and thats cutting it close).

Area forecasts also mention cloud layers. If you see something like “SCT-BKN030 OVC050 CLDS LYRD 150,” you know youll be ahead of a warm front, and topping that scattered-to-broken layer isnt likely, settle for VFR underneath. Or dont go.

IFR pilots: If the forecast also mentions possible scattered rain showers and thunderstorms, and its over a wide area with cumulonimbus, you should be fine…if and only if you have weather radar, a sferics device like a Stormscope and/or datalinked Nexrad in the cockpit, plus weather flying experience and a solid-gold Plan B.

Pilot reports are great sources for information on cloud bases and tops. I give them whenever I have half a chance. You should, too. Have a look at AOPAs “SkySpotter” presentation online (

And then once youre up there, monitor and use Flight Watch on 122.0 mHz for updates on surface observations, TAF amendments and, of course, any hot Pireps. (Hint: After a lower broken layer becomes an undercast isnt the time to call Flight Watch for the nearest airports with VFR ceilings and visibility.)

Night on-top operations are in a different category. While the clear skies youll fly through while on top make for spectacular view of the stars, any problem with the airplane, for example, is instantly magnified at night. When on top of a solid cloud deck, its even worse. Were not saying dont do it. Were saying be aware of the increased risk and plan accordingly.

One last thing: dont go for the sucker hole. It got that name for a reason.

Getting and staying on top offers many operational advantages, especially when IFR but also when VFR. Like any other operation, however, it requires us to plan ahead, be fully aware of the challenges it poses and prepare for the different ways it may require us to respond to a problem. Take with you a good grounding in weather basics, a healthy skepticism about weather forecasts and contingency plans.

One of the best parts of flying personal airplanes is to launch in rainy, overcast, low-viz daytime conditions, climb out and turn on course. Popping out of the top of an undercast into brilliant sunshine, while the rest of humanity remains on the sodden surface, is what its all about.