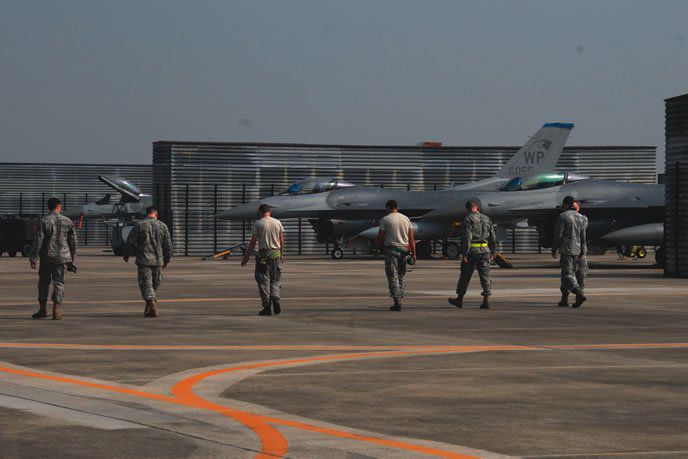 Alone, I stood in the cordoned area looking at the remains of an F-16s left main gear wheel rim. A whirlwind Safety Investigation Board notice two days before placed me in this hangar with a table full of junk; a damaged F-16 sat behind me on jacks. Quietly, I contemplated the pieces, methodically shifting broken metal on a table until I had a deformed, but complete, F-16 main gear rim. Within an hours time, Id arranged the tire bits around the junk rim. Three days ago these were in airworthy condition.

Results from the investigation into this mishap are of interest for two basic reasons. One is how foreign object debris (FOD) can totally ruin your day. Typically, FOD is considered a great danger to aircraft engines-especially turbines-and propellers, but not so much to tires. While both scenarios are to be avoided, a FODd tire can present substantial challenges to the pilot and has resulted in loss of aircraft and lives. The second thing we can find is a better understanding of how tires, rims and brakes can be damaged by FOD, and what can follow when they are.

Pay The Money, Take The Ride
Itd been an incredible feat of airmanship. After end-of-runway checks, the pilot was cleared for takeoff. Advancing to max burner in the desert heat, the Falcon accelerated to rotation speed. At 160 knots, the pilot pulled the heavy airplanes nose up; at the same time, he heard and felt the left main tire come apart. He saw pieces of tire thrown forward of the plane. Fearing engine damage, he idled the engine and began the ride of his flying career.

With no rubber on the left side, the brakes pulled terribly to the right at max braking. Runway raced past him in a blur as he concentrated on keeping the 16 on the centerline. The pilot dropped the arresting hook and called for the barrier, but it rose too late to catch the aircraft, still moving at well over 100 knots across it. Thankfully this base had a permanent, fixed barrier at the runway overrun, which caught the hook and held. The aircraft came to a stop only a few feet from the end of the pavement.

Hydraulic fluid now caught fire where compromised brake chambers allowed the fluid to spray on the red-hot brake pack. Shortly, fire trucks arrived to put the fire out and tend to the pilot, whod wasted no time egressing the jet. Wing safety, operations and maintenance personnel stood marveling at the pilots incredible skill blended with no small amount of luck. All agreed if the pilot hadnt done everything exactly right, hed have ended up a statistic-the F-16 doesnt historically do well on high-speed blowouts, often departing the runway and digging in a wing to flip the plane with successful ejection only marginally assured. As the tire blew, our pilot had maybe a 50/50 chance of surviving the episode.

Forensics
The pieces lying before me had taken the entire wing maintenance group several hours to gather and catalog. The runway, shared with a civilian international airport, had to be closed to gather evidence as well as perform a FOD walk its entire length…in excess of 10,000 feet. Airline and military operations alike were halted as the slow gathering process continued. In the desert heat, over 105 degrees F, people searched for every remnant of the accident. Photographers recorded where items were found.

The aircraft, sitting at the end of the runway, was deemed a safety hazard and had to be moved. Photographers and safety personnel were sent to first record every aspect and angle of the accident site and then record every movement of the aircraft by the crash and recovery team. The recovery team spent hours getting the aircraft into the hangar where it now sat.

Back at my table, I found several points where the tire carcass had been cut. I was satisfied this would require analysis by specialists, so I packed everything from the wheel/tire/brake into a box and shipped it overnight to a lab at Hill AFB; itd take a week or more to get a report on what they found.

Investigation
Moving to the aircraft, I was amazed at the damage the disintegrating tire had done. The flying rubber, suddenly freed from a centripetal force of 200 G, drove holes through the tough skin of the F-16s strake structure and dented/deformed points on the horizontal stabilizer. The flying shards had snapped hydraulic line clamps, destroyed the landing light and made countless small dents and dings in the gear door, wheel well and fuselage skin. Some pieces of rubber had punched holes three and four inches across through the area around the wing attach point. Thats what a tire holding 300 psi of air and rotating at thousands of rpm can do when it comes apart.

It took nearly two weeks of examining evidence, walking runways, taking pictures, doing tests, reading maintenance records, interviewing people, reviewing tech data, learning technical specifications and running into dead ends before we had a clear picture of the chain of events that occurred on a hot June day in the desert. Through the two weeks, wed developed most of a report that would eventually run about 200 pages and explained events as they unfolded. All we needed was an answer to what started the chain of events. When it came, it was surprising, simple and oh-so-preventable. For now, though, we knew the following:

For reasons unknown at the time, the left main tire of the F-16 did not meet its structural design specifications. As the jet accelerated, increasing stresses were put on the tire-it was just short of its damage tolerance when the pilot began the rotation maneuver, which momentarily unloaded the nose gear, transferring onto the main gear the airplane weight previously supported by the nose gear. It was at this point the tire reached its damage tolerance limit and began rapidly disintegrating. Within a split second, the only parts of the tire still attached to the fighter were the tire beads, still contained by the wheel rim, which was now rolling in direct contact with the pavement. Fortunately, the rims rolling design tolerance without a tire is 156 knots, and it met design criteria-for a time.

Shortly after crossing the undeployed barrier, the rim encountered a place where the runway had been repaired, resulting in a rise in the concrete of about three-quarters of an inch. For a rim still rolling at over 100 knots, it may as well have been a street curb. The sudden jolt compromised the rim bead area, causing pieces of the rim to break off and allowing the steel-reinforced tire beads to flail about the axle like grotesque, dangerous hula hoops. While wildly flailing, the inboard bead caught the brake assembly and placed a tremendous side load on the pistons, shifting them in their bores and allowing hydraulic fluid past the O-ring seals to spray onto the hot brake discs. The fire began as the arresting hook caught the permanent barrier and the aircraft raced into the overrun, where it ultimately stopped.

Test Results
As we finished piecing together the events, the tire examination results arrived. Was it a manufacturing defect? No. Was it improperly serviced? No. At a microscopic level, it was shown in multiple photographs the chords of the tire had been compromised by a sharp object (it was decided the likely culprit was a screw) that had penetrated the tread and cut/degraded several strands of the strength-giving straps of fabric layered beneath the surface of the tire.

A photo on page 9 shows where the tread penetration had occurred, likely on the way to the runway that day. As the aircraft accelerated, the cords progressively snapped until catastrophic failure occurred. The FOD had destroyed the tire, cost well over a million dollars in aircraft damage and engine teardown, could easily have claimed the pilots life, cost hundreds of hours of investigation time, thousands of dollars in investigation expense, shut down an international airport for several hours, stopped aircraft maintenance for a very long time and denied the Air Force use of an aircraft for several weeks.

Lessons
One lesson of all this is that FOD isnt just about rock dents in jet engine compressors or dinged props: It comes in all shapes and sizes, causing damage well beyond what you might believe possible, and is an ever-present threat to safety.

For safetys sake, its always a good idea to be on the lookout for FOD. Check your hangar, your vehicle, your tool box and even your passengers for FOD. Take a look up and down the ramp now and then to make sure areas you and fellow aviators use stays clear of rock chips, concrete pieces, screws and fasteners of all kinds. If any construction has been performed on the hangar, the taxiway or to nearby buildings, the potential for damaging FOD goes way up. Weve all seen odd things on airplane taxiways and in ramp areas over the years, and in both military and commercial environments, FOD demands attention. The same is true for general aviation.

Help each other do these things, and encourage everyone on the flightline to become FOD-aware. If you think doing a FOD check takes too much time, its nothing compared to waiting for investigators and attorneys to let you get on with your life.