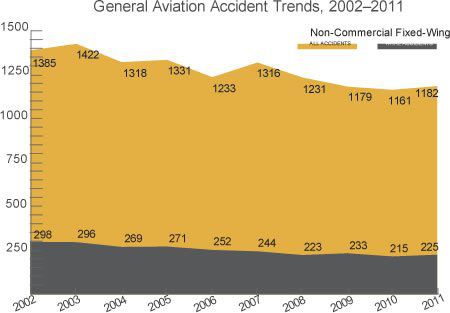 The GAJSC, like its airline counterpart the Commercial Aviation Safety Team (CAST), was established in the 1990s. According to its Web site, GAJSC “works to improve general aviation safety through data-driven risk reduction efforts that focus on education, training, and enabling new equipment in general aviation aircraft.” The CAST has been spectacularly successful in its efforts, as evidenced by an 80-percent reduction in airline fatal accident rates.

The chart above, adapted from AOPA Air Safety Institute’s 23rd Joseph T. Nall Report, summarizes fatal and non-fatal GA accidents in 2002 through 2011. Despite incremental improvements in both categories, the chart demonstrates the number of GA accidents has not declined as many would like, remaining essentially flat over the period.

To up the ante on GA accident reduction efforts, FAA and industry reinvigorated the GAJSC several years ago and tasked it with a data-driven approach to accident reduction. The GAJSC promptly formed the Loss of Control Work Group. The panel’s first task was tackling loss-of-control accidents occurring during approach and landing, and issued a final report on September 1, 2012. A second phase of its efforts resulted in a focus on departure and en route LOC accidents; that report was issued October 29, 2014.