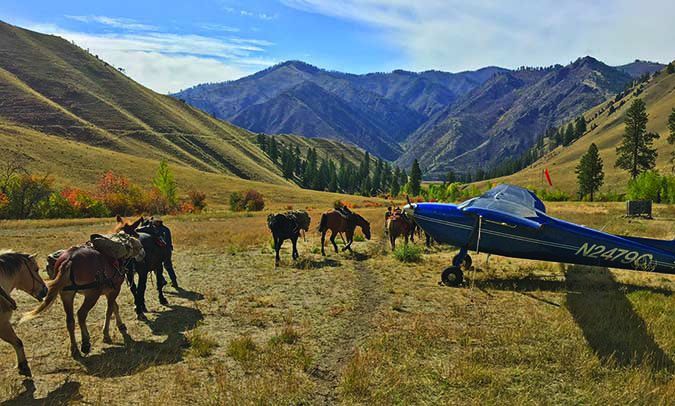 I get kind of worked up when I’m unsure. Last year, I hauled a load out of a backcountry strip (Sulphur Creek, Idaho, ID74) that included a 320-pound elk, my brother and me, plus all our gear for eight days in my Cessna 180. Field elevation was 5835 feet, and I remember that the takeoff used up a lot of the 3300-foot runway. I went through the numbers over and over before I left and when we got home, I confirmed the loading cargo put us right at gross weight on takeoff.

This year, I flew a similar load out of Cabin Creek, Idaho (I08), with 16 fewer gallons of gas, 1600 fewer feet of elevation and 1600 fewer feet of runway. Cabin Creek’s 1700-foot-long runway has a rather substantial slope, a 100-foot elevation drop from the top of the runway to the bottom, giving it a 6.35 percent grade. Unless you’re flying a helicopter, taking off downhill is the only way.

Back of The Envelope

As I loaded the plane, I mentally went over the numbers again and again: 24 gallons of gas (144 pounds); 195 pounds for me and 245 for my brother (including five pounds each for our outdoor clothes); around 150 pounds of camping/hunting gear, plus another 40 pounds of emergency gear in the back of the plane (spare tailwheel, emergency stove, survival gear and food). Adding it up in my head, it was 774 pounds. The variable was four quarters of elk. If the elk was the same as last year, total loading would be 1100 pounds. Twelve-hundred pounds is the airplane’s useful load. By my estimates, I was under the airplane’s gross weight.

With the temperature at 60 degrees F and climbing, how much runway would it take? I knew I was inside the performance envelope, but I was keenly aware it was going to take more runway than usual. I picked an abort point of 1200 feet abeam the windsock. If I had to abort, it wouldn’t be pretty, but I know from reading accident reports and writing articles for Aviation Safety that I would rather have a plan to crash on the ground at a relatively low speed than keep going out of stupid optimism, trying to limp into the air without enough energy to sustain flight and running out of runway. I also knew I needed to climb out of the canyon. I won’t say that I was planning for failure, but I wanted to be ready.

Knowing the CG envelope of my plane, I packed the heavy stuff as far forward as I could, which usually is good operating practice, depending on the aircraft. With the folding seats out of the way, I stacked the slabs of fresh, organic elk meat right behind the pilot and passenger seats. I had done everything a reasonable pilot could do.

So why was I so worked up? Because I don’t like estimates. I prefer absolute knowledge.

While it can be tedious, it is a good idea familiarize yourself with the loading permutations of the aircraft you regularly fly. Building a spreadsheet or using an app makes it more convenient to run a variety of weight and balance scenarios to gain an intuitive understanding of how they affect the aircraft’s CG. But pencil and paper work well, too.

For example, when it is just me, fuel and my emergency kit in the very back, I will have a forward CG that is inside the CG envelope. If the plane is empty and the passenger is the same weight as me, we need at least 50 pounds in the very back to place the CG behind its forward limit. If my front passenger is heavier than me, I need to add a lot of ballast to the back to avoid a forward CG.

I discovered this forward CG issue when I took a friend and his son for a ride. I knew my friend was heavy, but I was a bit surprised when he told me he weighed more than 300 pounds. Running the numbers, there was no way I could get the plane to balance with him in the front seat. I needed at least 200 pounds in the passenger area or 100 pounds in the baggage area to bring the CG into spec. His kid got to ride shotgun because there simply was not way to pencil it out for him to be in the front seat without another passenger of at least 200 pounds.

When I calculate for a plane full of passengers, I can have a 200-pounder in each seat and be inside my CG, but as the plane fills up, the CG moves aft. With a fully loaded plane, any weight in the baggage area can tip my CG beyond the aft limit. When that happens, my emergency kit has to move from the very back station in the extended baggage area to the main baggage area to stay in limits. Then I double check the security of that emergency kit to ensure it has no chance of shifting back during flight.

I have had numerous experiences with a fully loaded plane hauling various configurations of people and gear, like three passengers with backpacks, or two passengers and a heavy load of video production gear. Each time I have a fully loaded plane, I run the numbers. From this exercise, I have learned that with a full load, the challenge is to get the heaviest weight as far forward as possible to stay within CG.

Not everyone has a workhorse plane that has been put through the loading paces. In general, if you have a novel load, you owe it to yourself (and your passengers and the FAA) to run the numbers. In time, you will discover which circumstances make the CG too far forward and which move it too far aft. And of course, any time you are approaching gross weight, it behooves you to know the best way to load the plane to stay within limits and know what to expect on takeoff.

Back to my story, the last day of our hunting trip. We had been successful, but hauling two elk was an obvious non-starter, so I had hauled the first quarters out earlier in the week. When the trip was over, we loaded our gear, the quarters of the second elk, and headed to the top of the runway.

I was confident with both my back-of-the-envelope numbers and that I was within the airplane’s gross weight and CG limits. I had checked, double-checked and plugged my estimates into the weight-and-balance app on my iPad, which told me the same story. But I kept fretting, even more than usual. I kept thinking about last year’s long trip down a much longer runway. This year, I had 1600 fewer feet of runway and thought we might be near gross weight again.

As it happened, the takeoff was a nothingburger. I was easily in the air and into ground effect less than halfway down the runway, at about the 700-foot mark. The plane accelerated past VX and VY, and into cruise-climb territory while still in ground effect. I was taught to stay in ground effect on short airstrips to harvest as much free energy as possible, so I pushed the nose down to take full advantage. With a positive climb established, I steered toward the sunny side of the canyon to pick up whatever thermal lift I could—another mountain-flying trick I use to get free energy.

We stopped in Challis, Idaho, to pick up enough gas to make it home, but I was still fretting. The rest of the trip was uneventful. When I got to the hangar, I weighed every single bit of cargo as we unloaded the plane. I needed data. It turned out my conservative worst-case scenario was off by 250 pounds. We had packed lighter, and we quartered this year’s elk without the ribs, so it was lighter as well. I actually could have topped off the airplane’s fuel tanks and still been within gross weight.

By taking the time at the end of the trip to weigh my full load, I gained further understanding of my plane’s loading limits. Short runways and heavy loads will always get my attention, but by running the numbers and making conservative estimates, I think and hope I will continue to have safe flights.

Mike Hart is an Idaho-based flight instructor, and proud owner of a 1946 Piper J3 Cub and a Cessna 180. He also is the Idaho liaison to the Recreational Aviation Foundation.