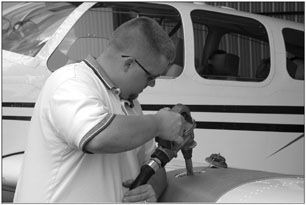 Fuel-related accidents total about ten percent of all general aviation accidents each year. They take place at the rate of more than one a week, and are often fatal. If the Pilot-In-Command takes some reasonable care in planning and conducting the flight, this type of accident can almost always be prevented.

There are three main categories for fuel-related accidents: fuel exhaustion (running out of gas), fuel mismanagement/starvation (gas is aboard the aircraft but isnt getting to the engine(s)) and fuel contamination (water-logged, improper or poor-quality fuel).

Aviation Fuel 101
A pilots fuel management begins with some basic knowledge of aviation fuels. The aviation gasoline (avgas) available these days at most FBOs for piston aircraft engines, 100LL, is a low-lead, 100 octane fuel dyed blue. It is aromatic, and evaporates easily. By contrast, the fuel commonly used in jets and turboprops, Jet A, is clear or straw-colored. Automotive gasoline (mogas) may be used in some aircraft-especially ultralights-if they are certified for it. Some aircraft with low-compression engines can use mogas under a Supplemental Type Certificate (STC). There is no specific color used in mogas, so pilots flying aircraft in which it is allowed need to be extra careful when they draw samples.

Jet fuel is very different from avgas. Its very close to kerosene in its chemical properties and burns at very high temperatures. Although some turbine engines and airframe combinations can use avgas under certain conditions, you simply cannot mix jet fuel and avgas in a piston engine-the resulting detonation will quickly destroy the engine. Similarly, the high-compression piston engines used in todays airplanes require 100LL avgas-using mogas in them will also result in significant damage.

For these and other reasons, the pilot must be certain that the aircraft is fueled with the correct fuel before each flight. Supervising the fuel procedure yourself (see the sidebar on the opposite page) is the best way to ensure an appropriate amount of the proper fuel is aboard. And, of course, theres the growing popularity of less-expensive, self-service fueling at airports throughout the U.S.

How Much Do You Have?
The flight planning phase is where fuel management should begin and includes some basic assumptions about fuel. For example, the Pilots Operating Handbook (POH) tells us the exact amount of usable and unusable fuel the aircraft can carry and the limitations, if any, on how and when it can be used.

The POH also gives us the fuel burn rate in its performance charts, and you should use these charts and tables-along with monitoring your groundspeed-to evaluate your original plan. You need to know if you can safely make your planned destination, or get to a planned alternate. This information tells us how much fuel we have and how much well need. Despite the POHs information, one assumption that can go seriously wrong is the capacity and integrity of bladder-style fuel tanks. For example, have repairs been made to one or more bladders? Wrinkles in the bladder can decrease the tanks capacity. How much fuel does the bladder tank actually hold? Especially if youre planning a max-range flight, you may want to do a check of the tanks actual, real-world capacity (See Dry Tanking, October 2004).

Other airplanes, notably some models of single-engine Cessnas, can be devilishly difficult to fill completely. Although reasons-and procedures to ensure filling the tanks to their capacity-vary, the key is knowing your airplanes capacities and how to make sure the tanks are as full as they can be. This can get particularly interesting when the airplane has multiple fuel tanks or when less-than-full fuel is necessary to ensure the airplane remains within its weight and balance limitations.

How Much Do You Need?
The next item on your pre-flight planning list is to determine how much fuel youll need. Simply drawing a straight line between your departure and destination airports and measuring the distance might not cut it. Instead, you might need to make certain that you consider deviations for weather and mountainous terrain, plus airspace like MOAs, Restricted Areas and TFRs. And, if youre planning a flight in a busy corridor, like southern California or the northeastern U.S., you can pretty much bet you wont get the most efficient routing.

Next, youll need to compute the planned time en route, taking into account the forecast winds at cruising altitude. From the time en route and the planned fuel consumption, then compute the amount of fuel required, plus a healthy reserve. This is an important howgozit check, one made much simpler by using a computerized flight-planning application.

Preflight Checks
A large part of fuel management begins with the preflight inspection. First, youll need to look for signs of fuel leaks. Integrated fuel tanks may weep through lines of rivets. Leaking tank drains are easier to pick out. There are usually spots on the ramp surface, and stains close to the drains.Bladders may also leak fuel; look for stains on the underside of the wing near the fuselage.

Fuel tank caps that are poorly sealed with deteriorated O-rings or seals can cause fuel siphoning, or allow water into a tank. If a fuel tank is siphoning during flight, or has been, it will leave a stain.

The first place to start to check the fuel supply is by looking at the fuel gauge indications. They may give a fairly accurate picture of the fuel aboard, and they may not. The actual quantity in each tank must be verified by visually checking it. Some tanks can show an accurate reading of reduced quantities with a visual tab indicator.

Check for fuel contamination by taking samples from all sumps. Check your sample carefully. At the slightest sign of water (small bubbles or drops that sink to the bottom of the sampler cup), drain the tank(s) until there is nothing but clean fuel of the proper color. If an aircraft has been parked a long time, or has leaking filler caps, you may have to drain as much as a gallon or two, although this much water is way too much, in our opinion, and demands grounding the airplane until a thorough inspection can be conducted.

Especially when flying a piston-powered airplane, check for jet fuel contamination. Engine destruction stemming from careless pre-flights following misfueling have resulted in a number of accidents.

Any solid contaminants in fuel are easily seen in fuel samples. Before you fly, check these with a mechanic. Whatever is causing the contamination needs to be located, to avoid fuel starvation from a blocked fuel line.

Finally, checking the fuel tank vents is very important. Vent lines allow gasoline vapor to escape, and outside air to enter a tank. Unless air can enter as fuel is drawn out, fuel starvation, fuel tank rupture, fuel gauge malfunction or even structural distortion of the wing may result. The actual vent system may simply be a small hole in a fuel cap, or it can be a complicated system of plumbing, including vapor return lines. If you are not sure, check the POH, or with your mechanic.

In-Flight Fuel Management
Using some sort of flight log is an essential part of fuel management. You can compare planned progress along your route with actual progress, by selecting checkpoints along the route, and computing the estimated time en route to each one. When progress goes better than planned, its a welcome plus. Burn fuel from the tanks in equal amounts to get improved lateral balance in airplanes that cant feed fuel from both wings at the same time.For example, to keep the weight equally balanced, fly one hour on the right wing tank, then switch to the left wing tank. Making these changes every hour presents less of a problem in remembering when its time to switch tanks.

Falling well behind schedule should certainly be a strong signal for diversion to an alternate or a landing short of your destination for refueling. Trying to stretch fuel endurance has resulted in many fuel-exhaustion accidents. If fuel is tight, however, there are some ways to conserve it. For example, youll burn less fuel when cruising at a lower power setting, so slow down. Best economy/best-range power settings are in your POH. Be sure to consult it for details.

Some aircraft are equipped with auxiliary fuel tanks, which may not always feed the engine directly. In these cases, fuel from auxiliary system tanks is transferred to the main tanks and then to the engine. It pays to know which system you have. Trust the POH and any supplements for detailed information on STCd tanks or fuel-system equipment. In many airplanes with auxiliary tanks, takeoff and landing must be on the main tanks to prevent possible fuel flow interruption.

Minimum Fuel Advisory?
And dont think running out of fuel is something that cant happen to you-airline crews sometimes get close; some have gotten too close. If you are running low on fuel and coordinating with ATC, declare a minimum fuel advisory. This means delays cant be tolerated and probably will result in an emergency.

The poster-child accident for failing to keep ATC informed of a critical fuel state involves a Boeing 707, operating as Avianca Flight 52, from Colombia to New Yorks JFK International Airport. The flight took off from Medellin, Colombia, on January 25, 1990, with approximately 81,000 pounds of fuel. On arriving in the New York area, bad weather forced the 707 into three different holding patterns totaling almost 01:20 in duration. Eventually, the crew advised ATC the flight could hold only for five more minutes. Shortly, the flight was cleared for an ILS approach and was subsequently cleared to land.

But the crew missed the approach and was being vectored for another ILS when two of the jets four engines quit from fuel exhaustion, 12 miles southeast of JFK. Shortly afterward, the other two engines flamed out. The aircraft impacted on a hillside in a wooded residential area on the north shore of Long Island. Seventy-three of the 158 persons aboard were killed, 81 were seriously injured and four suffered minor injuries.

The NTSB determined the accidents probable cause to be, in part, The failure of the flight crew to adequately manage the airplanes fuel load, and their failure to communicate an emergency fuel situation to air traffic control before fuel exhaustion occurred.

Also With This Article
“Supervising The Servicing”
“Aircraft Fuel Systems”

-Ray Leis holds ATP, CFII, Commercial and glider certifcates, and has been a Designated Pilot Examiner.