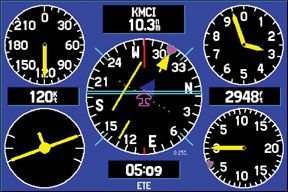 While it is unlikely youll ever have to use your hard-earned partial panel flying skills in a real emergency, critical systems do and will fail at the worst possible times. The good news is there are several relatively inexpensive tools on the market that can make the ordeal more manageable for a single pilot in IMC.

The Garmin GPSMAP 396 and 496 handheld GPS receivers retail for under $2500, plus about $50 a month for the databases and XM weather subscriptions. In addition to a color moving-map display loaded with terrain and weather graphics, a

“five pack” of virtual instrumentation provides most of the information one needs to accomplish partial-panel instrument flying. (There is no attitude information, hence its not a “six pack,” but more on that in a moment.) The 296 and monochrome 196 units each offer the panel page, too, but not the XM weather.

These portable GPS navigators can be useful in dealing with the loss of attitude and heading information following a vacuum failure in IMC, and-presuming their batteries are charged-the loss of navigation systems following an electrical failure. These failures are particularly problematic in aircraft with a single battery, or without a standby vacuum system or backup instrumentation. If your aircraft is of the modern glass-panel variety, it is likely equipped with dual alternators and batteries, with standby airspeed, attitude and altitude indicators somewhere in its panel. Even so, you need to thoroughly understand how both the primary and backup systems operate, and what you will be left with if they fail.

Before you launch into IMC with the expectation of using your portable GPS as a partial-panel crutch, you should practice working with it in visual conditions. The information it offers is not exactly the same as whats on your airplanes panel, regardless of how “retro” or “glass” that panel is.

For example, speed is represented as groundspeed, not airspeed, so you cant use it to identify important numbers like flap or gear extension speed, or final approach speed. However, the odds of simultaneously experiencing a pitot blockage and a vacuum failure are arguably pretty low, so its reasonable to suggest that you should keep your airplanes airspeed indicator in your scan.

Direction is presented as magnetic track not magnetic heading, but when following an airway or an approach course, track is really what youre most concerned with anyway. Altitude is true altitude (your actual height above sea level) as determined by your GPS position and is quite accurate even when compared to a properly set altimeter.

“There are a lot of misconceptions about the panel page,” said Matt Burch, software engineering team leader for handheld GPS units at Garmin. Burch, a pilot, helped write the algorithm that is used to represent the flight instruments. “The rate-of-turn indicator is shaped like a turn coordinator but it really isnt. We should have made it in the shape of an old turn-and-bank indicator instead of a turn coordinator. Since were GPS-based, the only way we can know that your airplane is turning is by your ground track. Its just a rate of turn indicator. But we use the symbol of a turn coordinator because everyone knows what that is.”

In a typical partial-panel situation, the airspeed indicator (ASI) provides an indirect pitch indication. Because the ASI is located directly above the turn coordinator in a traditional “six pack” of flight instruments, the pilot can capture pitch and bank information in one glance. At constant power with no other configuration changes, if airspeed increases then pitch is decreasing; if airspeed decreases then pitch is increasing. It is the “pitch plus power equals performance” equation solved backwards.

Meanwhile, there is another indirect pitch indicator in the Garmin “panel”: The vertical-speed indicator (VSI). The main advantage of using Garmins GPS-based VSI for partial-panel pitch information is that it provides a direct and nearly instantaneous indication of vertical velocity without the lag normally associated with a mechanical, pressure-based VSI.

Burch said the VSI on the GPSMAP units is based on a combination of differences in altitude and Doppler shift in satellite signals. “We toned down the sensitivity of that needle because we didnt want it to be too twitchy,” he said. “The VSI on the screen responds a lot quicker than the actual VSI. The GPS is pretty much always right on. You can push the nose up or down quickly and the needle will move almost at the same time.”

A centrally located HSI allows the pilot to follow a navigation course without having to turn his or her eyes away from the bank and speed indicators, as one would have to do on a conventional instrument panel where the primary OBS is mounted off to the right of the pilots field of vision. This makes the job of partial panel flying easier, allowing an “inverted V” scan using the turn rate indicator for bank, the HSI for route and approach course guidance, and the VSI for pitch. The pilot should cross-reference the airplanes actual panel regularly to confirm airspeed when initiating any configuration change, and to monitor the engine and other systems.

These portable units are not certified for use under IFR for several good reasons. First, there is no standard way to mount them in the cockpit, no fixed source of electrical power and the antennas may not be entirely reliable, as I found out the hard way while researching this article.

I was flying with my 396 on an approach in visual conditions, with the standard, remote-mounted GA25 antenna perched atop the glare shield. As I descended toward the runway on short final, a “Lost Satellite Reception” message popped up on the screen. The needles on the panel page disappeared. On another occasion, the instruments appeared to behave erratically.

At first I thought the problem might have been related to my antennas position in the airplane; perhaps some part of the airframe was interfering with the GPS signal? However, a Garmin spokeswoman told me that an unknown quantity of defective GA25 remote antennas shipped with some 396 and 496 units sold in 2006-and apparently I got one of them.

“We dont have a solid serial number range for the bad antennas because the problems showed up intermittently,” she said. “If a customer thinks that they have a bad GA25, they simply need to contact us and we will replace the GA25 with a GA26C.” I flew again with the GA26C antenna and it worked flawlessly, as did the built-in “stick” antenna.

“Both the remote and stick antennas work very well,” the spokesperson told me

afterward. “The advantage of using the remote antenna is that youre able to put it closer to the glare shield and further away from the airframe. This advantage is usually more apparent in high-wing airplanes where the wing could block the GPS signal.”

Though the Garmin GPSMAPs are “WAAS enabled,” they will not display a glideslope when executing a published GPS approach with LPV minimums, unlike the panel-mounted Garmin 430W and 530W systems. This is because WAAS-Wide Area Augmentation System-approach procedures are not part of the GPSMAP data set: The approaches loaded in the portable units are for situational awareness only. Since WAAS provides the increased positional accuracy making LPV approaches possible, a WAAS-enabled GPS receiver is more accurate than one without it. These units offer what looks to be a glideslope indicator but what youre seeing is a representation of your VNAV profile, a tool designed to help you fly a stabilized VFR descent.

“Im three miles out and I want to get down to pattern altitude. I want to be 1000 feet above the airport. It will alert you and will give you a glideslope-like bar to steer you down that profile,” Burch said. “It intentionally cuts out at 500 feet above what was set.” Garmin made it that way, he added, knowing that pilots would try to use it to fly a homegrown ILS approach to a grass strip. In a real emergency, thats exactly what it could be used for, but with caution.

As with any other act of instrument flying, when contemplating using one of these Garmin portable GPS devices for an emergency bailout maneuver, it is wise to have a strategy and prepare. Think about your scan and practice in your airplane in visual conditions with a trusted safety pilot.

On the ground before departure, program your GPSMAP with either a flight plan of sequential fixes or a direct-to-destination course. Set up an appropriate VNAV profile. Make sure you know which buttons to press to view the instrument panel page, active flight plan and moving map. Know how to select and load an instrument approach. Mount the unit to your aircrafts yoke or, if you fly with a side or center stick, find a way to position it so you dont have to tilt your head way down or turn your head sharply in one direction or the other to see it. Rapid, frequent head movements can be a recipe for vertigo.

Once airborne, start by establishing straight-and-level cruise flight directly to your waypoint of choice. Check that your GPS and XM antennas have not shifted position during takeoff and climb, and that you still have a solid GPS signal. Next, don that view-limiting device and, under the watchful eye of your safety pilot, cover up the attitude instruments. Wait a few seconds to simulate the time it might take you to realize something is wrong in a real emergency and then activate the panel page. You should see the next waypoint on the top of the screen, along with distance and estimated time to the waypoint.

Flying the airplane, then, becomes an exercise in keeping the CDI centered and avoiding unusual attitudes as you decelerate and descend toward your destination.

“I was flying in Europe last year, flying a brand-new airplane that had something like 19 hours on it, and the glass cockpit failed on us while we were IMC over the Alps,” said Burch. “We had a prototype 496 with us on the suction cup mount. I guess Im a big believer in it, but Id hate to get into a situation where that was my only out. Its a useful tool to have. With the high speed GPS receiver in the 496, Id feel more confident in my ability to keep the airplane upright. But of course if you dont have partial panel skills, it doesnt matter,” he concluded. Good advice, from one of the guys who helped design it.