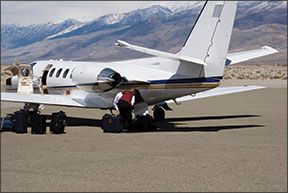 In his timeless classic Fate Is The Hunter, Ernest K. Gann regales readers with several tales of in-flight emergencies, hairy takeoffs and grateful landings. Perhaps the book’s most memorable takeoff involves a grossly overweight C-87 departing Agra, India, on a hot day, aimed directly at the nearby Taj Mahal mausoleum. Of course, Gann didn’t know the airplane was overweight before beginning the takeoff. How he and his crew flew it could be viewed as a clinic on how to handle an overweight airplane.

Gann was getting paid to fly fully loaded and minimally equipped airplanes over long distances, and his skill and experience cheated fate on numerous occasions. I’ll crawl out a fairly stout limb and suggest neither you nor I will ever accumulate a similar record. So, when you find yourself forced to deal with your own Taj Mahal takeoff, it’s likely you’ll have no experience whatsoever in handling what suddenly is a very reluctant airplane. Let’s try to at least give you some tools with which you can try to cope.

Our Advice? Don’t
First, let’s go on the record and state that intentionally flying—or attempting to fly—an overweight aircraft is stupid, illegal, immoral and probably fattening. No matter the reason, temptation or situation that got you to this point, it’s not a good idea. Even if you manage by superior airmanship, dumb luck or some combination to achieve flight, staying airborne, getting to your destination and landing without a hiccup could be a major challenge.

Second, let’s also acknowledge that 10 or so extra pounds above an airplane’s maximum gross takeoff weight (MGTW) isn’t going to make that much difference. In fact, unless the aircraft you’re flying is brand-new or was weighed recently and its weight and balance data precisely and accurately calculated, loading it to its MGTW means it’s probably overweight, anyway. That’s thanks to the years of detritus, “negligible” equipment and math errors that accumulate in the average personal airplane and its logbooks. And we haven’t even discussed the fact that passengers lie about their weight. So, it’s probably a good bet you’ve flown an airplane weighing more than it legally should. But that doesn’t make it right, nor does it make you ace of the base. It only makes you lucky, in the past.

Third, we should note the difference between attempting to fly an overweight aircraft versus one loaded outside its center of gravity (CG) range. The former is possible if risky; the latter is less possible, riskier and much more susceptible to mishandling. By that I mean an aircraft operated outside its CG range is much less intolerant of ham-handed skills or intentional abrupt maneuvering. Even if you get it off the ground, it may be impossible to manage or land normally, thanks to drastically altered handling characteristics.

Finally, let’s also acknowledge—reluctantly—that flying an overweight aircraft is definitely possible under the right circumstances. Long runways, cool temperatures, a gentle touch on the controls and remaining within the aircraft’s CG range are keys to success and minimize—but do not eliminate—the additional risk. Change any one of those variables, however, and the risk can increase dramatically.

What You Can Expect
It shouldn’t come as a surprise that an overloaded aircraft won’t perform as its manufacturer intended. It will demand more power to taxi, the takeoff will consume much more runway, it will climb slowly and stall at higher-than-published speeds. If you’re lucky enough to get it airborne and to your desired altitude, it will fly slower, with a greater angle of attack (AoA), and consume more fuel. How much worse will its performance be? It depends.

Ferry pilots routinely operate in overgross conditions to accommodate the fuel necessary to get, say, from California to Hawaii. A 100-gallon auxiliary fuel tank mounted in the back seat area of a Piper Archer II/III, for example, can add more than 600 pounds to the airplane’s 2550-lb MGTW. That makes the airplane about 24 percent heavier than its MGTW. But the performance hit will be far worse than 24 percent.

Why? Because that excess weight is actually more than 50 percent above what Piper intended the airplane to carry. The airplane’s standard empty weight is 1416 pounds. Subtracting that amount from 2550 leaves you with a 1134-lb useful load. Six hundred pounds, meanwhile, is 52.9 percent of 1134 pounds. At its new 3150-lb weight, the airplane is supporting roughly 150 percent what it was designed to carry. The additional weight adversely affects the airplane’s structural integrity by overloading the cabin’s and baggage-area’s load-bearing structure, and forces the wings, tail and related components to do more work to lift it all.

The performance hit you’ll encounter in such a situation depends on a variety of factors, including the engine’s relative health, atmospheric conditions and airport elevation. On a standard day at sea level, we would expect to see our available performance decline by at least the 52.9 percent increase in useful load. In fact, a pilot ferrying an Archer II/III across the Atlantic Ocean with a 100-gallon tank in the back seat recently reported a 300-fpm climb rate. That’s less than half the Archer’s published value of 667 fpm. Your mileage may vary, and each airplane will be different. For some additional thoughts on calculating overweight performance, see the sidebar at left.

Structural Integrity
Another concern about overweight operations involves the airplane’s structural integrity: How much additional weight can it carry before it either bends or breaks? Some basic math can help us answer the question.
Let’s presume we’re flying the aforementioned Piper Archer II/III, with a 2550-lb MGTW. Let’s further presume we’re trying to take off 450 pounds over that MGTW, at a total weight of 3000 pounds. The airplane is certificated in the Normal category, meaning its basic structure is designed and tested to a +3.8/-1.5 G load factor. That also means the airframe won’t break until loading exceeds 9690 pounds.

Using that same 9690 pounds of load limit but at the new, 3000-lb weight, our Archer can muster a designed-in load factor limit of only 3.23 positive G. That’s still a lot of G loading for average flight conditions, but it also highlights why the FAA and aftermarket modifiers include additional operating restrictions when legally operating above an aircraft’s original MGTW.

Throughout this discussion of how to handle flying an aircraft weighing more than its MGTW, we’ve presumed the pilot is doing this without approval. In fact, there are several ways to legally operate an aircraft above the MGTW found in its original paperwork. One of them is a Special Airworthiness Certificate for overweight operation on FAA Form 8130-7. The FAA routinely grants these permits for operations up to 10 percent above the aircraft’s MGTW for a set period of time, usually 30 days.

Another way is to add equipment that includes a gross weight increase. Examples can include auxiliary fuel tanks mounted at the wingtips, a turbocharger or simply heavy-duty tires. Such modifications usually are performed under a supplemental type certificate (STC). Some airplanes, like the Beechcraft A36 Bonanza, can realize a 400-lb MGTW increase from adding such equipment.

There’s no free lunch, however. For example, the manufacturer of one popular STC allowing a MGTW increase for modified aircraft specifically states, “The performance listed in the basic ‘Pilot Operating Handbook and FAA Approved Airplane Flight Manual’ is generally applicable to this airplane with the tip tank installation at the gross weight listed in the basic manual. Since the certification basis of the tip tank installation does not include a requirement that the performance be made available, and since the modifier did not choose to supply this information, no performance is listed at gross weights above that of the basic airplane.” In other words, you’re on your own at weights above those in excess of the airplane’s original MGTW.

Some Final Words
There’s a reason the airplanes we fly come with a weight limit. It’s there to ensure we can meet expectations for performance and structural integrity, among other reasons.

Meanwhile, readers may not agree with the extrapolating math and assumptions used in this article or in the sidebar on the opposite page, but there is no guidance on these topics from the FAA or manufacturers, understandably. If we find ourselves operating outside the airplane’s limitations, we choose to do it conservatively.

Finally, in no way do we endorse operations above an aircraft’s MGTW. But we’ve been tempted, and we know you have or will be, too. At least if you find yourself in such a predicament, you’ll have a few more arrows in your quiver.