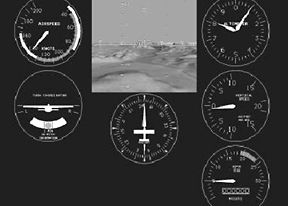 For nearly the entire century of powered flight, a fundamental question has begged for an answer: Whats the best way to maintain aircraft control in instrument conditions?

Attempts to answer the question have depended on a variety of factors. The person asking, the person answering, the technology on hand and the mission of the airplane all change the perspective from which the problem must be attacked.

Most general aviation airplanes are equipped with flight control instrumentation that has changed little in concept since the invention of gyroscopic instrumentation in the 1930s – despite research that has shown more effective displays and technological advances that have stood the rest of the world on its ear. Scientific understanding of perception, cognitive processes and flight physiology have also advanced.

Low-visibility loss of control and controlled flight into terrain remain among the biggest killers in general aviation, particularly among low-time and non-instrument rated pilots. Given the state of technology, scientists continue to investigate if theres a better way to help pilots who arent up to the task of instrument flight find their way out of trouble.

The approaches are varied. Some researchers look toward vision-enhancing technology to cut through clouds and gloom and depict a visual image of the view out the front on a monitor or heads-up display. Others consider a graphic depiction of the intended flight path, reasoning that a diversion from the intended path is more easily recognized than detecting that diversion from the raw instrument readings. Still others look at ways to modify the instruments themselves to make interpreting the information more intuitive and efficient.

FAA certification requirements suggest that this last strategy may be the most productive, at least in the short term. Aircraft design has been evolutionary rather than revolutionary, and theres no reason to expect otherwise in this instance. The question is what constitutes a reasonable advance in safety that would also carry a reasonable price tag for the hundreds of thousands of certified airplanes in the general aviation fleet.

Flat-panel displays seem to represent a reasonable technology and have proven themselves in commercial airplanes. In the general aviation fleet, their use has been limited primarily to navigational displays, including moving maps. But the technology may also be fit for creating flight instrument displays.

The theory is simple. Through practice, proficient instrument pilots scan quickly and methodically. They process the information quickly and make small and precise control movements. Pilots who are not proficient in instrument flight, on the other hand, scan more slowly and perhaps haphazardly. They take longer to process the information, by which time they have to make larger control movements, which are also less precise.

The challenge then becomes creating an instrument display that helps the pilot process the information quickly and accurately, thereby keeping the feedback loop short and sweet. Since the strength of computers is processing information humans find monotonous, it seems only natural to apply a computer-driven solution to the problem.

The pilots were also given a panel in which the attitude indicator was enlarged to a 4-inch by 4-inch square display. The display included some symbology typical of advanced electronic attitude displays, but also added some advanced symbols. The electronic display included a digital heading, velocity vector with a sideslip flag and a roll scale with a sideslip wedge, presented with the standard blue-over-brown artificial horizon.

The third display used the electronic display and replaced the blue/brown horizon with computer-generated terrain imagery derived from a terrain database for Asheville, N.C. The three-dimensional display was generated such that low-lying ground was dark green, gradiating to white for terrain higher than 9,000 feet msl. The display gave a 50-degree field of view of the simulated terrain ahead.

Perhaps not surprisingly, the results of this study appear to show that the more advanced the display, the easier it was to fly. Statistical analysis of the results is ongoing, but researchers were confident enough in the results to conclude that the most advanced display was easiest to fly and induced the least amount of stress in the pilots. Subjectively, all pilots except one said they preferred the display with the terrain depiction.

Researchers plan to follow the experiment with a series of simulator and flight tests to determine just how much terrain depiction it takes for the advanced display to be effective.

While the evidence is preliminary, it seems intuitive that having a computer interpret instrument data would free the pilot to act more effectively on that data. Adding in terrain depiction is a reasonable addition because it makes the instrument more closely resemble the out-the-window picture the pilot has during clear day VMC.

In addition, the technique of layering information onto what is essentially a standard attitude indicator display means the system can revert to a more basic configuration. For example, a loss of GPS signal would not render the display unusable, only cause it to revert to a standard blue/brown horizon.

The fact that this kind of a display represents a minimally invasive modification to existing airplanes adds to its appeal. While its premature to expect actual certified hardware anytime soon, it does point out that real improvement in aircraft control in instrument conditions may be in the offing, and at a cost that wont break the bank.

Also With This Article
Click here to view “Look, Ma, No Mechanical Gyros.”