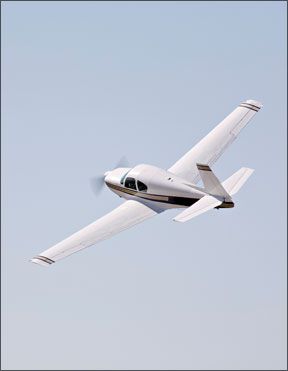 When discussing the concept of turning an airplane, there are at least two separate and completely different concepts. One is in the navigational sense of turning to a new course or heading. However, this article is concerned with another concept: moving the airplane in a curved flight path. Curving or bending the flight path changes the airplanes longitudinal axis orientation with respect to

the earths surface. Of course, this occurs while moving through the air. This curving flight path is one of only two the airplane can make-the other, unsurprisingly, is straight.

Examples of curved flight paths mainly include transitions: from the runway to initial climb, from the final approach descent to flaring above the runway surface, from level flight to climb, from descent to level flight are curved flight paths. Maintaining a constant-bank level, ascending or descending turn are other examples. An aerobatic loop is an extreme example. Another example is maintaining a constant-bank level, ascending or descending turn. None of these examples require any rudder or aileron input to achieve a bending of the flight path. Some application of rudder might be required to maintain coordinated flight or for other reasons. The downward force of the horizontal stabilizer, increased or decreased by elevator deflection inputs, is what permits the pilot to move the airplane in these curved flight paths. Clearly, the pitch control-the elevator or stabilator-enables transitions back and forth between straight and curved flight paths.

It is true a pilot can produce a slow, highly uncoordinated turn by using only the yaw control (rudder). This technique also generates some roll in the same direction as the depressed rudder pedal. To counteract the roll, opposite roll control (aileron) must be applied, resulting in a slow turn with very high drag forces. The fact a slow turn can be produced by rudder application leads some pilots having a poor understanding of its correct use to misuse the rudder in situations that can be fatal.

The FAA written test question banks include the examples below:

-What force causes an airplane to turn?

-The rate of turn at any airspeed is dependent upon what?

Instead, understanding how an airplane turns requires understanding the lift force generated by its main wings, the downward lift force imposed by the horizontal stabilizer and how the elevator is used to control them. Additionally, knowing the location and direction of each lift forces center with respect to the airplanes center of gravity is essential. This explanation, of course, considers a conventional airplane with an aft-mounted surface imposing a downward force to balance the upward forces the wings impose. Airplanes with canards and delta-wing designs may lack a horizontal tail but use other means to impose the necessary balance.

During level flight, the positive lift generated by an airplanes main wing works by opposing gravity, which acts on the weight of the airplane. A vector pointed toward the top of the airplane can represent this main wings lift; one pointed down represents weight. Meanwhile, both thrust and drag operate perpendicular to lift and weight. The relative positions and directions of these vectors are depicted in Figure 1, at right.

The horizontal stabilizers are also wings but they generate a downward force. The vector representing this negative lift is opposite the direction of the main wings lift vector. These lift vectors act perpendicular to both the longitudinal and the lateral axes of the airplane. Both vectors are parallel to the yaw axis and most importantly, aft of the airplane center of gravity. Of course, the pitch control allows the pilot to vary the force of both vectors.

The positive lift vector of the main wings (in a properly loaded airplane) is always aft of the airplane CG. This design feature ensures the airplane automatically pitches nose-down whenever the wings fail to generate sufficient lift to maintain level flight. One result is the main wings always exert a rotational force around the CG and lateral axis tending to push the nose down and the tail up whenever the main wings are generating lift. To maintain level flight the horizontal stabilizer and elevator must generate an equal rotational force in the opposite direction with negative lift. The relative positions and directions of these forces are depicted in Figure 2, right.

During a banked turn, the main wings positive lift vector has vertical and horizontal vector components. All three of these vectors are both perpendicular to the airplanes longitudinal axis and aft of its center of gravity. The vertical component opposes the earths gravitational pull on the weight (or, mass) of the airplane, but it also produces a nose-down rotational force.

Any pilot who can perform a level banked turn knows that some additional nose-up pitch control is required to maintain altitude. Most pilots probably understand the reason more lift is needed to maintain altitude results from the lift generated by the main wing no longer being directly opposite the force of gravity. In fact, as the graphic in the sidebar above and left depicts, the total lift being generated by the wing now has two components: a vertical vector and a horizontal one. Before the bank was initiated, the only vector was vertical, as depicted in Figure 1 on page 17.

However, increasing the main wings positive lift also increases the nose-down rotational force pushing the nose in a direction opposite the intended turn. Therefore, the main wings increased positive lift (still acting on a point located aft of the center of gravity) pushes the nose down and away from the intended turn direction with even stronger rotational force.

As the airplanes bank angle increases, a smaller and smaller portion of the main wings lift is directed vertically. If level flight is to be maintained, more total lift must be generated by increasing the angle of attack by adding nose-up pitch control. However, the main wings greater total lift also results in a greater tendency for the nose to pitch down and away from the intended turn direction.

Thoroughly understanding the effects of all airplane controls is very important for safe flying. If there are any misunderstandings about these concepts, the pilot, passengers and airplane are gravely at risk when unusual flight conditions may be present. If the subject is well understood by a pilot, he or she is far more likely to apply airplane controls correctly in stressful or unusual situations.

Pilots can get away with not understanding these concepts 98 percent of the time because modern airplanes are relatively forgiving. However, failure to understand these concepts may bite pilots when they get into highly stressful or unusual situations, and they apply flight controls based on their poor understanding of the controls effects.

To summarize, ailerons and rudders do not turn the airplane. Ailerons allow us to tilt/bank the airplane so that the downward force of the horizontal stabilizer and elevator can be increased and applied horizontally pushing the tail away from the intended turn direction and thus push the nose in the turn direction around the center of gravity. Rudders correct adverse yaw that exists only when the pilot is changing the angle of bank.

Never use the rudder to help speed up a banked turn!