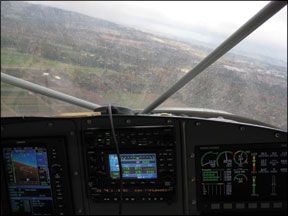 To my mind, only a couple of decent reasons exist to fly through rain: First, because your destination is out there in or beyond the precip-and its light rain and not far through it, at that; second, because youre too cheap or lazy to wash the plane normally. Otherwise, rain stands among those conditions to not take lightly-and on many fronts, to be taken as a

condition to avoid as much as possible.

When you think about it systematically, a lot goes on with the airplane when exposed to rain and-aside from the possibility of improved cooling on a hot day-its difficult to conjure up much to commend rain flying to anyone. But, we know youre going to fly in the rain; we do, too, but begrudgingly and guardedly-or avoid it if the datalink weather returns show orange or red. So instead of saying, “Dont do what we do, have done, and will probably do again,” we offer five strong reasons to make you think about whats happening to the aircraft when flown in rain.

Under the cowlings rest both the most expensive components in your plane and systems important to the second-most expensive part of your plane: the rest of it. Your alternator lives there, possibly right up front; the voltage regulator is back on the firewall, along with sparkplugs and wires, magnetos and engine instrumentation. Theres plenty under the bonnet you dont really want wet.

Some mechanics of my acquaintance argue that cold water splashing through the cooling plenum isnt the best thing for that oh-so-hot engine, either-and in the hardest rains, water gets past the prop and into those inlets, then through the baffling. Meanwhile, out on the wing or wherever your pitot tube sits, flying in even light rain holds the potential to clog the pressure side of your pitot/static system-and from experience, we can attest to the thrill of finishing an approach with an inoperative airspeed indicator.

For the engine and the other expensive stuff under the cowling, theres not much you can do once youre in precip. For the pitot system, flip on the heat switch, if you have one.

Once on the ground and doing your postflight, exercise your airplanes pitot/static system drain, if so equipped. Many Pipers have plunger-style buttons; press and hold for a few seconds when on the ground. Other aircraft demand removing a panel to gain access to the systems low spot. Hopefully, theres some clear tubing installed to immediately signal if water is in the system. As always, if in doubt, consult a trusted technician.

Sitting out there, generally exposed to the weather, your fuel-filler caps are your main protection from water creeping into your tanks and diluting your fuel. Some airplanes arent the greatest at keeping rain out of the tanks even when sitting still; they all have vents and some of those vents hold the potential to allow rain in, although generally only in the heaviest of downfalls. Others are recessed into the wing and can retain water, a design flaw, in our view.

But the caps themselves can, with exposure to heavy rains for very long, let water into the tanks; and good luck sumping fuel while airborne.

Of course, none of this is much of an issue when the exposure is blessedly brief-such as flying through a squall line only a few miles across. But transiting broad areas of rain on long trips greatly increases the prospect of getting water into the fuel tanks. If enough rain gets to the engine, youll wish for a process to convert water into gasoline.

An ounce of prevention being worth a pound of cure, carefully inspect fuel fillers for moisture and places where water can accumulate. Pay close attention to any O-rings or gaskets: They should be clean, dry and perfectly smooth. Replace anything looking questionable. Many owners routinely replace these O-rings and gaskets at each annual inspection.

Other components you may want to consider when it rains? How about the entire airframe? It can collect and hold water-enough of it to throw off control-surface balance, even CG. In fact, its a rare airplane that can boast watertight wings, flaps, ailerons and empennage extensions. Neither rudder nor fin, horizontal stabilizer nor elevator nor stabilator are hermetically sealed against water.

Just sitting out on a ramp in days of light rain, Ive seen flaps and ailerons and horizontal tail surfaces hold considerable water-which translated into considerable weight, until we drained the waterlogged components. Many Bonanzas and Debonairs routinely collect rain water in their ailerons; tip them down against the stops to drains water through a hole drilled in the inboard bulkhead.

Depending on what youre flying, water collecting in control surfaces when in rain is a strong possibility-and theres no telling how changes in air pressure inside those components might change their capacity. Its not something were anxious to learn. Even with limited exposure to heavy rain, water found its way into ailerons, flaps and horizontal tail surfaces of airplanes weve flown.

And we must admit, its interesting to look out the window as flaps are deployed to see water stream out. Seeing that can make one thankful we hadnt flown into sub-freezing weather after the rain exposure. Freezing rain, of course, is to be avoided at all costs in personal airplanes and is a whole nuther topic-perhaps for a rainy day.

Flying through even light rain generally brings with it at least an unsettled ride; in general, the heavier the rainfall, the worse the ride and the greater the noise in the cabin. Fact is, weather systems producing rain can shroud unstable conditions sure to make your day less comfortable, albeit more interesting for those collecting Pireps.

As you near boundary layers between fronts generating rain, you increase your chances of encountering downward flowing air. When the air falls fast enough, you get a microburst, air falling so rapidly it can suck the airspeed right out from under you, up high or down in the pattern.

Of course, if youre too close to the ground, the microburst can take you right into an encounter the investigators may label controlled flight into terrain, or CFIT.

If experienced at cruise, the power of the downward moving air can drop you far enough for you to pass through altitudes used by aircraft going in the opposite direction.

It may come as a surprise, but rain also imposes an aerodynamic penalty on the aircrafts lifting surfaces. If that makes sense to you, then it also should make sense that the worse the rain, the worse the penalty and the more severe the result.

Even light rain contaminates the purity of the air flowing over an airfoil. The mist of water mixes with the fastest-moving air, reducing its density and velocity. In turn, lift is reduced, also. Heavier rain moves the problem beyond the moderate impact of water splashing into the airflow. Moderate and heavy rain can create a thin layer of water on the lifting surfaces, reducing lift and increasing drag as new droplets roughen that water on the wing. The impact of these raindrops on the wet airfoil serves to further exacerbate the loss of aerodynamic integrity, adding to the damage on the aircrafts performance-lost lift, increased drag, premature boundary separation.

Fluid dynamist Dr. James Valentine published research recognized by the National Research Councils Transportation Research Board showing the effect is most pronounced at high angles of attack, after deployment of flaps and other lift-enhancing devices. The drag increase may go as high as 40 percent; the lift reduction percentage may reach 18. The result can be as much as a 17-percent increase in stall speed. This means, with the stall coming in at much lower angles of attack, rain starts to work its evil in even light conditions.

So, a wing normally stalling at 17 to 18 degrees angle of attack may stall at as shallow a value as nine degrees. Couple deteriorated aerodynamics, higher stall speeds, microburst or downdraft conditions and close proximity to the ground, and what to you get? On the ground sooner than planned at a location you didnt choose.

Sometimes what instinctively feels like the wrong option is the right thing to do to escape a problem. And rain, as weve seen, holds out the potential for many problems-most of which decrease lift, increase stall speed and lead to deteriorated control response.

Confronted with a microburst downdraft of strength sufficient to drop the airplane by dint of falling air, the common response called for most often involves pitching up to best rate of climb airspeed and firewalling the power. The threat calls for a different solution when the downdraft occurs in a downpour.

Pitching up into the onset-speed territory of stick shakers or aerodynamic buffet likely will place the wing at or slightly below its critical angle of attack in all but light rain. So push down smoothly and rapidly to gain airspeed while adding power, and then gradually pitch up with full power for a positive rate of climb. The idea is to gain some energy and stay away from a speed or angle of attack close to the stall. Below pattern altitude, this can be risky, so some practice using full-power recovery from a stall is called for.

Flying in rain does rinse off the airplane, but also can create some problems. Now you know.

Dave Higdon is a professional aviation writer/photographer with several thousand hours of time.