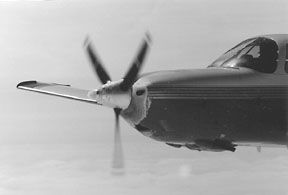 Every winter, the aviation press drones on about icing and icing accidents. Yet every pilot who flies IFR – even semi-seriously – knows that general aviation doesnt shutdown for the winter, despite the gloom in the forecasts. So what gives?

Obviously, it wont do to simply say dont fly in icing. Its simply not realistic and few of us who use our airplanes during the winter would follow that advice anyway. Its better to adopt a policy of avoiding icing where possible, getting out of it quickly when you do encounter it and learning to recognize icing scenarios that arent flyable in anything but a transport category airplane certified for flight into known icing. And even then, there are significant risks. In 1994, an ATR-72-a fully-deiced turboprop-encountered super-cooled drizzle drop icing while holding for an approach into OHare. Because of a little understood phenomenon known as ice damming, the crew lost control and the aircraft crashed near Roselawn, Illinois, killing all aboard.

Fortunately, icing that severe isnt an everyday event but its definitely an every winter event in some parts of the country. The critical survival skill is learning how to recognize the potential for this kind of icing in the forecasts and bailing out of it right now if you encounter it.

Theres more to flying a non-ice protected aircraft during the winter than poring over DUAT data. Lets set up an example; an IFR trip from Palwaukee, Illinois to Aspens Pitkin County/Sardy field. Thats a distance of 492 miles, often flown into westerly winds during the fall and winter.

Weatherwise, lets assume a cold front has just passed Denver and is located in the mid plains, say at Lincoln, Nebraska, where its snowing and the surface temperature is 24 degrees. The winds behind the front are howling from the northwest, but Denver is clear.

Palwaukee is relatively warm, with a surface temperature of 38 degrees and a ceiling of 5500 feet. There are pilot reports over mid-Illinois reporting tops up to 8500 with little or no ice. Closer to the front, stations are reporting layers to 14,000 feet, with some icing in cloud. Can this trip be flown in a Skylane?

The answer is probably yes unless there are some specific elements in the reports and forecasts that make the icing risk too great.

But lets pause for a moment and consider the most important thing to think about: Outs or bolt holes. If you contemplate a trip like this, this risk can be managed only if you always have airports along the way that offer a reasonable expectation of successful diversion. If a missed approach seems remotely possible at a diversion airport, think twice before departing.

Lets put some numbers on that judgment. At Palwaukee, a surface temperature of 38 degrees is six degrees above freezing and theres 5000 feet of VFR air below the clouds to melt off any ice we might encounter after departing into more challenging conditions than we may have expected from the reports and forecasts. Even a 2000-foot ceiling might be acceptable. So weve got a solid-gold out for a return to the departure airport.

Enroute, assuming you make it on top and dont have to descend to land at the departure airport, can that Skylane make it on top near the front? At 15,000 feet with a normally aspirated IO-470, the answer is yes, assuming you have oxygen aboard. You wont have blistering climb performance, of course, but youve got 300 miles to coax the airplane above the highest layer, assuming the pireps are accurate on tops.

Reports Are Wrong
But suppose theyre not. What if the tops are really above 18,000 feet and the Skylane just wont do it? If theres no ice-always possible-no problem. But if you encounter even light rime for an hour (even less), the airplane may become too loaded to maintain altitude. Long before that, youd wisely consider diversion.

This is where decisionmaking gets tricky. What airports are suitable for diversion enroute and whats the weather like? A winter cold fronts weather can be highly variable ranging from heavy snow, freezing rain and even thunderstorms to rather benign dry fronts that dont have much threatening weather at all.

The planning scenario is more complicated if a low pressure driving the weather is near the course path. In the knuckle to the east and north of the low, cold air may layer with warm, moist air. Thats nearly a certain recipe for heavy icing and youll absolutely need to remain above the tops. For all but the most risk-tolerant pilot of a single-engine airplane, this is a no-go situation, unless the airplane is equipped with effective de-icing. Even the pilot of a normally aspirated twin will be hard-pressed to maintain 14,000 feet if a single magneto fails.

Putting more numbers on the equation, suppose you have to divert into Des Moines, either because of icing or a mechanical problem. If the current weather is 2500 feet overcast, 10 miles vis with 36 degrees on the surface in occasional light snow, you may reasonably consider that doable. On the other hand, if its 1000 feet overcast and 3 miles, in light freezing drizzle, youll probably pass on the trip, unless Des Moines is an anomaly in an area of otherwise better weather.

Engine problem enroute? In a single your options are limited, which is true of IFR single-engine operations in general. This is very much a game of odds, averages and what can best be described as personal comfort judgments. Just because one pilot is comfortable with a diversion airport reporting 2,000 feet overcast in 5 miles, doesnt mean you have to accept that. Then again, reported weather of 300 overcast and a half-mile should be cause for pause for all of us operating singles with no de-icing. There are no hard and fast rules, however. Youll have to set your own standard.

Fuel On Board?
Fuel is a consideration on any trip but its critical when youre hoping to overtop ice. On our imaginary trip, we want to avoid descending into Lincoln, Nebraska for a gas stop. So well need at least five hours of fuel, which is quite doable in the Skylane and even allows for stiffer winds than we expected.

In this scenario, youll want to continually listen to ATIS broadcasts enroute to validate the reports and forecasts upon which you based your go decision. Youll be listening for above-freezing temperatures at the surface and whatever ceilings and visibilities you consider acceptable. As you cross the front into colder air, youll lose your out of above-freezing surface temperatures but you may gain in higher ceilings and better visibility.

For planning purposes, a warm layer escape isnt realistic if the surface temperature is 33 degrees. That simply wont melt off accumulated ice. What will? Its hard to predict, but 40 degrees is solid gold, 35 degrees probably isnt. And what if you get caught on top and need to fly an approach through an icy layer?

Say youre above an airport and theres a 3000-foot layer of almost certain ice-containing clouds between you and the runway. The surface temperature is 26 degrees and theres not enough fuel to fly to landable VFR. Youve boxed yourself into a less-than-comfortable situation but all is hardly lost.

Obviously, a precision approach is the method of choice, remaining above the clag as long as possible, even if it means a significant fly-down indication on the glideslope indicator before you finally descend. Fly well above your usual approach speed without flaps, which increase the likelihood of a tailplane stall. If this speed is above your gear extension speed but below gear deployed speed, lower the gear and suffer the ice accumulation. (In truth, it probably wont make much difference.) But dont overdo the speed, otherwise youll risk breaking out right on target but sailing down the length of what could be a slick runway.

Obviously, avoid a go-around at all costs. One trip through an icy layer is more than enough. And last, dont panic just because youre above icy clouds. Its always possible that a descent will load the airplane and blank the windshield but experience has shown that the likelihood of this actually bringing the airplane down is minimal.

At the Destination
Now consider another scenario: the descent into Aspen from on top. The weather there is reported to be occasional snow showers, ceilings 3000 feet with visibility 5 miles with occasionally 1300 feet in 2 miles. Surface temperature is just below freezing. The VOR DME-A approach has a HAT of 2380 feet with required visibility of 2 miles and a 1.4 DME after-MAP segment to the threshold.

Is this doable? Although the weather sounds benign, commencing the approach is not a good idea. Its unreasonable to expect that you can complete the approach to a landing in the first place and attempting to climb out of this rock-laden bowl with a load of ice is all but insane.

Neither condition – a warm runway and a reasonable assurance of making the approach – is present. The only reasonable option is to land shy in the Denver area or go to Grand Junction, where the weather is usually free of local snow showers. And you did carry enough fuel to get to Grand Junction? Rent a car and complete the trip overland.

Summing It Up
So, to summarize, the following conditions are must-haves when considering a trip through icy clouds:

• A reasonable expectation of minimal or no icing on the climb out.
• Ability to continue on top or between layers for the entire trip.
• A quick descent through a potential icing layer-three minute maximum exposure-only if the surface temperature is above 36 degrees and weather is above approach minima.
• No flying into the warm front side, where all the moisture is.
• Weather at all enroute airports with ILSs is an easy get-in, not a marginal get-in.
• Enough fuel to fly to a VFR descent, if that becomes necessary.With these provisos in mind, you can make icing judgments that are neither overly conservative nor too cavalier relative to the risk at hand. In the end, youll need to gain some icing experience in order to refine what works for you. As with all decisions related to flying, there arent any one-size-fits-all answers.

Bruce Chien is a CFII-MEI and AME who owns a Piper Seneca II and a Cessna 140.