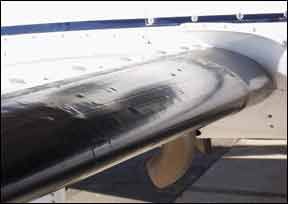 Anyone who’s read Ernest K. Gann’s Fate Is The Hunter will recall the author’s experience in an ice-laden DC-2 over the Eastern Seaboard. After departing Nashville for New York, Gann and his captain, Hughen, encounter severe icing and attempt to return to Nashville, only to find it below minimums. They are forced to divert to Cincinnati, barely making it, thunking down the airplane on the runway after an 8+50 odyssey exhausted altitude, fuel and ideas.Their DC-2 was equipped with de-icing boots, alcohol for the props and windshield, and even a heating duct to defrost the cockpit windows. None of it could keep up with the ice accumulation or shed what turned out to be up to four inches of the stuff, providing an early demonstration that there’s no such thing as an airplane immune to icing.

The average personal airplane has little ice protection. That the technology hasn’t progressed very far since Gann’s early career is evidenced by the fact many modern airplanes sport equipment basically identical to that carried aboard his DC-2. The TKS “weeping wing” system has merit but there’s never a free lunch, and heating all the airframe surfaces, sort of the Holy Grail of aircraft deicing, isn’t always practical. That said, using heated bleed air from their turbine engines is a popular and effective solution for many jets and turboprops. Understanding the basic systems’ designs and drawbacks not only may result in intelligent choices when choosing a system, but also can help convince us not to need them in the first place.

Deice Vs. Anti-Icing
When considering the systems we use to keep off ice from airframes, there are two basic types. Deicing systems work to eliminate—melt or physically detach—ice after it’s accumulated. Anti-icing systems work to prevent ice from adhering to the airframe in the first place. The DC-2’s boots and alcohol-dispensing systems offer examples of both types.

Boots are a de-icing system: Ice has to already have accumulated for them to work. As the sidebar on the opposite page explores, boots work when air is pumped into channels molded into the rubber, expanding them and, hopefully, breaking off the ice. By now, you’ve already thought of one disadvantage of de-icing boots: They sometimes don’t get all the ice. Any ice remaining likely will be jagged, perhaps creating greater drag, and the boots don’t work at all where they’re not installed, like further aft on the wing where water can run and freeze.

Anti-icing systems work by preventing ice from forming in the first place. In the case of Gann’s DC-2, a tank filled with alcohol was plumbed to squirt the stuff on either the windshield or the propellers, but not both at the same time. If enough alcohol is present on a surface, ice won’t form. (Yes, alcohol and similar systems have a de-icing capability, but they’re primarily anti-icing in nature.)
The modern equivalent to the DC-2’s alcohol system is TKS, a system based on distributing a glycol/alcohol/water-based fluid over the airframe, including the prop(s). The sidebar at right includes a schematic for the factory-installed TKS system available from Cirrus Design.

Another system developed since the DC-2 days—and which has both de- and anti-icing capabilities—is the bleed-air system, which routes air heated in the aircraft’s turbine engines to the wings and tail, as well as the engine inlets themselves.  The table on page 23 summarizes these various systems, and others, along with their benefits and drawbacks.

Boots
De-icing boots, as the term implies, are rubber components attached to the leading edge of a wing or tail surface. As the sidebar at right explains, when they’re inflated with air drawn from either an engine-driven pump (typical piston-powered airplane) or a turbine engine’s bleed air system, the boots expand to physically break any ice adhering to them, which then is carried away in the slipstream. A cockpit-mounted controller is used to energize them, either manually or automatically.

“De-Ice Boots: Cycle Them Early and Often” explores one of the operational details concerning de-icing boots. Essentially, there has been some controversy over the years regarding when to operate them initially—at the first sign of airframe ice or later, after some has accumulated. Basically, the old-timers swear by waiting until some ice has accreted while the NTSB and a recent FAA-sponsored study strongly suggest initially cycling boots immediately upon ice formation.

Who’s right? We’ll go with the FAA-sponsored study, which looked at a variety of initial and subsequent cycling methods in a controlled environment. Of particular interest when considering when and how often to operate your de-ice boots is this thought: A lot of the knowledge and experience advocating a delay before activation was gained with older systems of relatively low pressure. Modern boots and systems feature higher pressures. Trying to dislodge ice after it’s accumulated with a low-pressure system likely results in the “ice bridging” phenomenon the NTSB says doesn’t exist. The FAA, meanwhile, says in its Pilot’s Handbook of Aeronautical Knowledge (FAA-H-8083-25A): “Although some residual ice may remain after a boot cycle, ‘bridging’ does not occur with any modern boots. Pilots can cycle the boots as soon as an ice accumulation is observed.” For additional details, see the sidebar on the opposite page.

TKS/Weeping Wing
Again, the sidebar on page 21 provides an overview of the TKS/weeping wing de- and anti-ice system, which works by pumping an antifreeze-like solution through specially modified leading edges and other devices to coat the airframe. The fluid used chemically melts accreted ice and prevents additional ice from forming. Unlike boots or thermal de- and anti-icing systems, TKS has one significant drawback: Once the reservoir’s fluid supply is depleted, so is your ability to keep ice off the airframe. The good news is a TKS installation can be accomplished on many popular general aviation airplanes, although obtaining FAA approval for flight in known icing (FIKI) generally is restricted to airplanes with 28-volt electrical systems.

Additionally, acquisition and installation aren’t inexpensive: When sister publication Aviation Consumer looked at TKS-system pricing back in 2008, a typical non-FIKI installation was $32,500 while known-ice capability for a Baron ran to $53,000. That same article noted installing FIKI-approved boots on a Piper Matrix at the factory added $55,000 to the invoice.

Electrothermal
All of which is well and good, but why can’t we just heat the wings electrically and prevent ice from forming or melt what’s already there? That’s the idea behind electrothermal de-/anti-icing systems like Kelly Aerospace’s ThermaWing. Formerly known as EVADE and installed on Columbia 300/350/400 aircraft, Kelly Aerospace makes it available for the former Columbia fleet and on Cessna’s (née Columbia) 350 and 400 piston singles. The technology had some early teething pains, which Kelly says resulted from installation issues. The FAA issued an Airworthiness Directive and the systems were reworked. Kelly says it’s working on FAA approval of the system on the Cirrus SR22. The system uses graphite-based foils affixed to the aircraft’s leading edges to conduct electricity and melt ice, and requires larger and/or supplemental alternators.

Other electrothermal systems include the heated windshields used on boot-equipped aircraft plus so-called “hot-prop” installations, featuring electrically heated pads. Both are used on many different aircraft sizes and types.

Bleed-Air/Electro-Expulsive
Two additional systems deserve mention. Both presently are available only on business jets. One is the so-called bleed-air system, which draws heated air from a jet’s turbine engines, directs it to leading edges and heats them. The technology usually isn’t available on turboprops, many of which still rely on bleed-air-powered boots and hot props. The electro-explusive technology, meanwhile, works as its name might imply: by subjecting conductive materials to high current. The action vibrates the material, physically separating any ice that formed. In this fashion, the technology works like a boot, but on a much smaller scale. Electro-explusive de-/anti-icing systems are being used on Hawker Beechcraft Premier I/IA and Hawker 4000 business jets, plus others, like the HondaJet and Learjet 85.

Ice-Free?
Most of us flying personal airplanes don’t have the luxury of de-/anti-icing systems. Even if we did, it likely wouldn’t be approved for flight into known icing, which is another topic entirely and one we’ll address in a future issue.
If you do happen to fly an aircraft with one (or a combination) of these systems, the takeaway here is that each has its benefits and drawbacks. Pressure pumps can fail, TKS fluid can run out and the various components can go on vacation when you need them most. And a de-/anti-icing system is designed to enable the operator to escape the icing conditions, not remain there, plus you may still have some ice to carry around. Have doubts? Pick up a copy of Fate Is The Hunter.