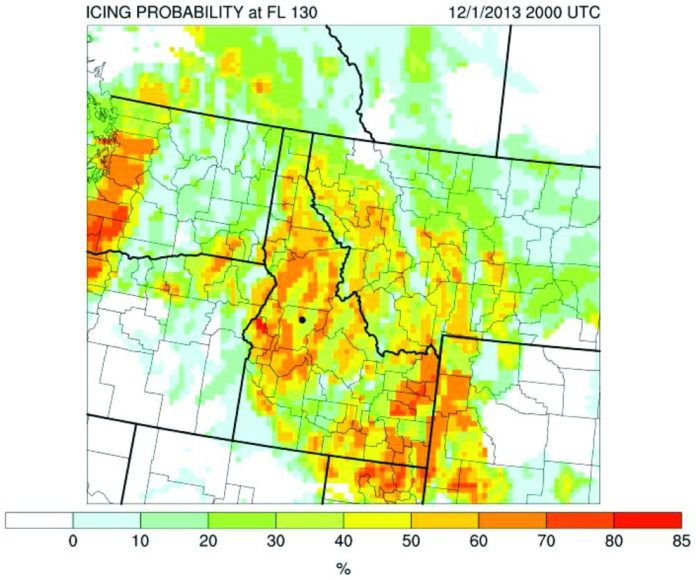 It’s that time of year again in the Northern Hemisphere, when in-flight icing can be a threat. Depending on where you are and where you’re going, icing may be a rare possibility during the upcoming season. It also can be a sure thing. Evaluating the possibility of in-flight icing is part of the equation—its potential impact is another.

For example, if we’re flying a Boeing 737, a 50-percent probability of icing at 13,000 feet is a good thing to know but of little consequence. For one, the airplane is certified for flight in known icing (FIKI). For another, it likely won’t be at 13,000 feet for very long.

But if we plan to cruise at that same 13,000 feet in our Boeing for, say, an hour, icing might start to be a factor. The fact is no airplane is designed to remain in icing conditions. And as Air France Flight 447 demonstrated, even a little ice in the wrong place can screw things up (especially if we don’t handle it well). Although technologies like inflatable boots and the TKS “weeping wing” system have brought FIKI to the personal airplane, a warm pitot tube is the only icing armor we have aboard the flivvers most of us fly.

When asked about the threats in-flight icing poses, a typical pilot might tick off the added weight and drag of ice on the airframe, plus its detrimental changes to an airfoil’s shape, resulting in loss of lift and/or even greater drag. And these are valid concerns.

That same typical pilot might completely overlook icing’s impact on other aircraft systems, including the powerplant(s). Carburetor icing should be a topic familiar to most pilots, but induction system icing can be an afterthought. And while there are systems we can activate to minimize icing’s impact on the induction system, we must remember they exist and know how to activate them.

On December 1, 2013, at about 1303 Mountain time, a Beech B36TC Bonanza was destroyed when it impacted terrain while maneuvering near Yellow Pine, Idaho. The instrument-rated private pilot and his four passengers were fatally injured. Instrument conditions prevailed and the flight operated on an IFR flight plan for the 234-nm flight from Baker City, Ore. The flight took off about 1222, with Butte, Mon., as its intended destination. At 1230, ATC cleared the flight to Butte at 13,000 feet.

At 1256, ATC asked the pilot to confirm he was level at 13,000 and established on the airway. The pilot responded, “Negative, three six Mike Lima’s picking up too much ice, uh we’d like to divert to, uh, Salmon.” The pilot then requested a descent to 11,000 feet, but ATC could only approve 12,000. The flight then was cleared on the airway to the Salmon VOR at 12,000 feet.

At 1301:04, the pilot advised he was having engine problems. Fifteen seconds later, he stated he needed to “go to three uniform two (3U2) immediately.” At 1302, the pilot reported losing the airplane’s engine and requested a vector. The controller advised that 3U2 was right below and that he had the airport’s information ready when the pilot wanted it. There were no further communications with the airplane.

The wreckage came to rest in snow-covered wooded mountainous terrain about 1.5 miles east of the last recorded radar target. The location was about 1.6 miles northwest of the Johnson Creek Airport (3U2) at about 7619 feet msl. The debris path extended some 138 feet on a heading of about 078 degrees.

Partial flight control continuity was established, with multiple separations, all of which exhibited overload. Damage to the three propeller blades was characterized as “slight,” indicating the engine was making little if any power. No evidence of any preexisting mechanical malfunction was observed with the airframe or engine that would have precluded normal operation.

The pilot logged onto DUATS and filed an IFR flight plan about 20 minutes before taking off. No formal weather briefing information was requested and there was no record of any contact with Flight Service. It’s not known if the pilot utilized any additional weather resources.

A full series of Airmets were current for the timeframe and intended route of flight, including for moderate icing, mountain obscuration and low-level windshear, and turbulence. There were six Pireps of light to moderate rime icing conditions below 18,000 feet scattered over Idaho prior to the accident, and nine afterward.

The weather reporting facility closest to the accident site was approximately 27 miles west at 5024. At 1251, recorded weather included wind from 140 degrees at 11 knots, visibility of nine miles in light rain, an overcast ceiling at 2400 feet agl and temperature of 2C.

The NTSB determined the probable cause(s) of this accident to include: “The pilot’s continued flight into known light-to-moderate icing conditions over mountainous terrain. Contributing to the accident was the loss of engine power due to induction icing.” Elsewhere, the NTSB said, “It is likely that the loss of engine power was due to a combination of structural and induction icing during the continued flight in icing conditions in an airplane that was not certified for flight in icing conditions.”

The NTSB also spent some time reviewing the B36TC’s POH, in particular those portions involving prohibited flight in icing conditions and activation of the alternate air system to overcome an induction system blockage. Ironically, the POH states, “With the induction air filter completely blocked, the alternate air opening will provide sufficient air to allow the engine to develop maximum continuous power up to approximately 13,000 feet.”

The only evidence of induction system icing melted in the post-crash fire, but the NTSB couldn’t find any other reason for an engine problem. The alternate air system on a Bonanza should automatically activate, but if it doesn’t there’s a handle to pull to manually open it. Perhaps better systems knowledge—awareness that activating the alternate air system may have restored power—would have resulted in a better outcome, but a careful analysis of available pre-flight weather information would have had the same effect.