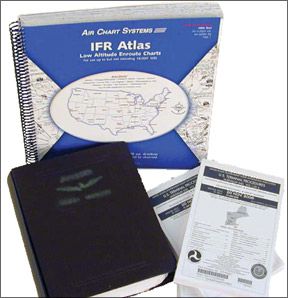 A long time has passed since Elroy Jeppesen first started drawing basic descriptions of ways to get into airports when the weather was down. Thankfully, aeronautical charting has evolved with technologies and operational needs. These days, the latest panel-mount avionics and handhelds coax us into the “paperless cockpit” realm, but a variety of factors havent

The good news is we have a choice, even if its among only two basic publishers. Another piece of good news is we can put down one publishers chart and pick up the others without too much confusion. While there are qualitative differences between the two publishers, a major distinction is how they distribute updates. And despite a third-party company simplifying the process, theres still a price to pay when it comes to managing revisions.

There are two main choices for your en route instrument chart needs: FAA/AeroNav (FAA) and Jeppesen. Both provide the same basic product: A folded, four-color set of charts presenting navigation data for specific areas of the U.S. If your travels take you outside the U.S., theres a map for that, also, though not from the FAA, which doesnt offer worldwide coverage. Meanwhile, Jeppesen offers charting solutions for pretty much anyplace youd want to fly (and probably a few places you dont).

As the excerpts on page 23 depict, symbologies and use of color differ between the two publishers. What you cant see is Jeppesen uses thin, lightweight paper for both its en route and approach charts, which the companys Web site says reduces on-board storage space while keeping weight as low as possible. The FAA/AeroNav en route low-altitude products are printed on the same-weight paper as a VFR sectional chart. All told, worldwide Jepp coverage (including terminal procedures) involves some 34,000 sheets of paper, according to the company.

Another area where Jepp and the FAA differ is how they divvy up the country. Complete conterminous U.S. low-altitude en route coverage comprises 27 charts when purchased from Jeppesen; the same thing from the FAA is 36. Both also publish a separate area chart in their full U.S. sets. Jeppesens take on the area chart includes all locations where Class B airspace exists, plus some other major airports. The FAA provides details on facilities at select high-density terminals throughout the country-which may or may not include Class B airspace-mainly for military use.

A final difference is whats omitted from the FAA en route charts package: detailed airport data. Jeppesens en route low-altitude coverage-which the company calls its Airway Manual and which is designed for mounting in an extra-cost, two-inch-thick plastic or leather binder-includes detailed textual information on navaids, ATC communications and various chart legends, among other data. While chart legends are “built in” to the FAA products, to obtain from the Feds the same basic data Jeppesen provides would require purchasing the Airport/Facility Directory for the area in which you intend to fly, plus an Aeronautical Information Manual, AIM, at a minimum. Whether all that data is necessary in the cockpit is arguable, but if you need it, Jeppesen provides it. The company also makes this data available in electronic format, as an option.

But perhaps the biggest difference between FAA and Jeppesen charts is the update process. Both publishers key their update schedule to ICAOs Aeronautical Information Regulation And Control cycle, or AIRAC, which is every 28 days.

For example and presuming an annual subscription, the FAA will ship you a complete set of fresh en route charts every 56 days, or every other AIRAC cycle. In between, youll have to record any changes yourself, based on a Notam review. According to the agency, theres an average of 35 changes to an en route chart every two cycles, or 56 days. When subscribing to FAA charts, one simply throws the old ones in the recycling bin and stows the fresh copies in the airplane. Simple.

Jeppesens revision system, however, is more complicated. For example, Jepp distributes revisions every 14 days. Dave McLean of the companys Aviation Navigation Solutions group told us, “Jeppesen makes every effort to mail revisions by this date, which is in advance of any time-critical changes to aeronautical information.” According to McLean, “En route Low Charts are updated as changes occur via Chart Change Notices (CCN) that are sent with every revision for a given coverage and cycle. The CCNs are revised to a specific tab in the manual and the changes are grouped by categories such as Navaids, Airways, etc. Actual charts are replaced as needed or when a significant number of changes occur, typically about once a year.”

Enter Air Chart Systems. Formerly known as SkyPrints and also as Howie Keefes Air Chart Systems, the company markets a set of chart atlases. Like the road atlas popular before GPS navigators trickled down to cars, the Air Chart product is a spiral-bound book of charts, measuring 11 by 11 inches and not quite -inch thick. Air Charts uses FAA charts-which are public domain-and arranges them so each page is a chart segment slightly overlapping with an adjacent page. Air Chart customers get a complete, spiral-bound set of FAA/AeroNav low-altitude en routes.

The company publishes only one updated atlas annually, and handles revisions by sending out a cumulative update sheet every 56 days. When the update is received, it goes into a pocket bound into the atlas. Updated information-like a revised minimum en route altitude along an airway, for example-is organized by geographic area, to be consulted as part of the planning process.

While keeping up with en route charts is a pain, maintaining a set of approach plates can be up there with getting a root canal. Nationally, according to the FAA, there are some 19,000 procedures, including arrivals, departures and approaches; some are combined (a localizer procedure, for example, printed with an associated ILS), but thats still a lot of paper. The paper the FAA uses for its approach plates is similar to newsprint; Jeppesen uses the same lightweight stock as their en route charts.

Presently, the FAA publishes 26 bound or loose-leaf volumes to distribute it all, some of which can get close to an inch thick. Jeppesen, meanwhile, requires 10 of its two-inch binders to organize complete U.S. coverage for approach plates, arrivals and departure procedures.

Jeppesens standard revision process is similar, according to McLean. “Charts are revised based on the AIRAC date and sent in the respective revision cycle (typically 14 days) with an effective date as appropriate.” But thats not all. Jeppesen also offers its “Q Service” as well as charting customized for business jet operators who dont care about smaller airports with short runways.

“Q Service is really a modified Standard Service and differs only in how revisions are sent and filed,” McLean told us. “Rather than replacing each terminal procedure as it revises, all new procedures for a given cycle are placed in a tab along with the revision letter that shows what has changed. When planning a flight, the pilot would first check the appropriate tabs to see if there are any changes and if not, then they would continue on the main section to find that procedure.” Jepps Q Service terminal content is completely replaced every 56 days.

Finally, Jepp also offers the Airway Manual Express, which is typically for smaller coverages. It comes in two volumes: One is the text and en route charts, updated when changes occur. The second volume contains only terminal procedures, SIDs and STARs, and is revised every 28 days, with complete replacement every 56 days, similar to the FAA charts.

Air Chart System also is in the approach plate business, supplying FAA volumes on a nationwide or regional basis. Like its en route atlas, however, Air Charts approach plates are updated annually. Every 28 days an update sheet is distributed, similar to a Notam summary. Then, at 56 days, the company provides a cumulative update similar to the one for its atlas. The operator is expected to use the update as a guide to when replacement approach plates are needed and may download them without charge from Air Chart Systems Web site.

When comparing the differences, theres no real dispute in our mind: Jepps charts are better, with greater attention to detail throughout. Amazingly, Jeppesen has kept their pricing for en route charts in line with the FAA/AeroNav product (or is it the other way around?), and its full airway manual service is only $175 a year more than the FAAs (not including the necessary binders).

But money is an object, as is finding the best way to back up the moving map in our panel and ensure we have a current en route chart. While that in mind, the Air Chart Systems IFR Atlas seems right. The price is right, the update process is simple, the quality is high and-presuming the atlas made it into the airplane-well always have the chart we need when we need it. Once were wedded to the Air Chart format for our low-altitude en route charts, were also locked into using FAA/AeroNav for our approach plates. But, Air Charts terminal procedures update process doesnt impress. So, we conclude were better off subscribing to the FAAs approach plates and pitching them every 56 days. If were headed somewhere off the beaten path, many FBOs stock what we need, or we can print them from the agencys Web site.

At least until inexpensive, reliable hardware/software solutions exist and we can totally eliminate the dead-tree versions of these charts once and for all, thats what wed do.