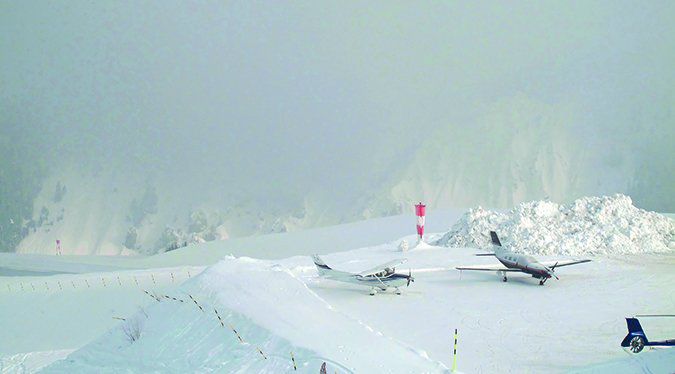 A cardinal rule of mountain flying is to always be mindful of places where the terrain climbs faster than the airplane, and then avoid them. This isn’t exclusively a backcountry issue—you don’t have to fly in the Western U.S. or in the mountains to get bitten—there are plenty of airports on the U.S. East Coast where we can run into things if we can’t climb well enough or if we stray off the published route, whether IFR or VFR.

The good news is there are well-established and published procedures we can use—VFR or IFR—when failing to outclimb terrain or obstacles poses a threat. The bad news is we can’t always meet the minimum rate of climb requirements. That’s where some additional flight planning is necessary.

There are two basic types of departure procedures (DPs): standard instrument departures (SIDs) and obstacle departure procedures (ODPs). A SID exists primarily to facilitate ATC routings and clearances, but they do ensure terrain/obstacle clearance. The ODP is designed primarily with terrain and obstacle avoidance in mind. Both are published, with SIDs usually depicted graphically right there alongside the approach plates. An ODP will be described in text and found in the “Takeoff Minimums, (Obstacle) Departure Procedures, And Diverse Vector Area (Radar Vectors)” portion of your flight planning documents. It formerly was in the now-discontinued Airport/Facility Directory (AFD). An ODP may also be charted, like a SID. Let’s start with why we have ODPs in the first place.

I pass over the Lemhi County Airport (KSMN) in Salmon, Idaho, often enough that I can imagine needing it as my port in a storm to escape bad weather. Since bad weather conditions often break at night, I can equally imagine having an opportunity to do a nighttime departure to finish a trip home. Given that it is surrounded by mountains that top out over 10,000 ft, getting out of Salmon requires at least a bit of forethought and some planning to avoid obstacles.

I could easily see dropping below the required climb rate either to manage engine temperature or due to high density altitude sapping my performance. That’s because I fly a non-turbocharged plane with typical performance numbers. On a cold day, with just me on board and half tanks, I can exceed 2000 feet per minute. I typically see 1000 feet per minute, and on a hot day with a heavy load, it can be a struggle to maintain only 500 feet per minute. And I have to do that all the way up to at least 11,800, where performance starts to drop off markedly.

Obviously the Ahehu Three requires the right conditions and a lot of attention to pull off in my plane. Instead of waiting for necessity to force my hand, I decided to look for an opportunity to do a test flight to see what it looked like in real life. In April, I had a business meeting at KSMN; this was the opportunity I was looking for.

When it was time to leave KSMN, I followed the Ahehu Three, but in daytime VMC conditions. I chose to fly a basic profile using standard climb-out airspeed and power settings to see what it would look like if I was nonchalant about it in IMC and wasn’t paying attention.

Doing nothing special, I arrived at the Ahehu waypoint clear of terrain but a skosh below 11,000 feet. I was comfortably clear of terrain, but 800 feet shy of the DP’s requirement. The test flight told me doing it IFR requires an aggressive climb but offers conservative clearance from terrain. I appreciate that extra margin, especially when I am departing in some weather and/or at night. The image at lower left is a ForeFlight screenshot of a flight plan implementing the Ahehu Three ODP overlaid on a WAC.

Perhaps the most critical time to be aware of obstacles and terrain is night operations. Ironically, obstructions like towers may be easier to spot at night because their lights stand out more than during the day, when it is harder to spot their silhouettes. Mountains and cliffs, on the other hand, often are bereft of human development, leaving them dark. On a moonless night, vacant terrain can become a “black hole,” an area with no lights.

More than a few pilots have been laid low by departing into black holes. They frequently obscure the most dangerous terrain, if for no other reason than it’s too rugged, too remote or too high to build on. As always when operating in mountainous or even unfamiliar terrain, it’s a good idea to know which direction holds the most steeply rising terrain and give it a wide berth.

You don’t need mountains to experience black holes. I have seen black holes in Kansas, Nebraska, Wyoming, Utah…heck, they are just about everywhere people aren’t. A dense forest, a military base, a wildlife refuge—no lights means no reference points to help you detect the terrain that may lie within, or how close to it you may be. And when you are flying on a moonless night, a black hole can suck you into disorientation to boot. While a black hole isn’t a classic obstacle, its effect is to hide obstacles from you, so beware. The mitigation? Scrupulously avoid flying near black holes, and make sure you’re at or above the minimum VFR altitude, or the one at which you’re cleared.

Every year, at least one pilot finds a set of power lines the hard way. Last year, an Idaho plane and pilot flying low and slow found a high span of power lines crossing a canyon downstream of the Palisades Reservoir, a hydroelectric dam. The plane ended up upside down in swift water of the Snake River. Fortunately, no one was seriously injured.

Admittedly, if you’re IFR and running into power lines is a concern, you likely have a whole `nuther set of problems. But you may find yourself tooling around beneath a cloud deck in VFR while waiting for ATC to find your clearance after you took off without it. We’ve all done it, at least once.

Power lines tend to concentrate around topographical pinch points. If you are looking for gaps to get through a pass, so were the engineers trying to optimize power line right-of-ways.

The symbol for a power plant on a sectional or the sight of a large coal stack or cooling towers for nuclear power plant—as highlighted in the image at right and circled in red—should clue you in that there are major transmission lines connecting the power plant to the grid. Particularly hazardous spans are noted on sectional charts.

When planning and briefing a flight, look for power lines in the vicinity of your departure, arrival and alternate airports. You never know when getting low in good VFR may offer operational advantages, but it might not be a good idea near some airports.

It is easy to take our home `drome or the airports we frequently visit for granted, but things change. Before making assumptions, check if new obstacles have sprouted up in your old, familiar arrival or departure paths. That is what Notams are for. A good preflight obstacle departure briefing makes it much easier to avoid them. Likewise, when planning a trip that involves a night-time or IFR departure, it is a good idea to mentally clear the climb and descent path to verify you know that you can avoid obstacles.

The good news for most of us these days is that a current VFR chart and all the relevant Notams are at our fingertips, thanks to the advent of electronic flight bags. There was a time when catalog cases were necessary to carry around the terminal procedures, en route charts, sectionals and the airport/facility directory. We had to call Flight Service on the 800 number to get Notams, and write them down on paper. Often, we wouldn’t have the correct sectional. The punchline is that, these days, there’s simply no excuse for not having current electronic charts in your cockpit and during your preflight planning.

Even if you file IFR to taxi to the pumps, there’s little question VFR charts are valuable. They’re especially so in mountainous areas, if for no other reason than highlighting the terrain you’ll be over. But they come in handy for low-land operations, too.

Mike Hart is an Idaho-based commercial/IFR pilot, and proud ownerof a 1946 Piper J3 Cub and a Cessna180. He also is the Idaho liaison tothe Recreational Aviation Foundation.