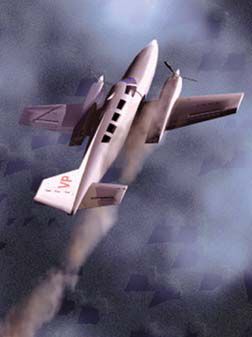 Perhaps nothing strikes fear deeper into the heart of a pilot than an in-flight fire. Not only are the effects of such a conflagration unpredictable, but the amount of time available to deal with the emergency-and make no mistake, an in-flight fire is a bona fide emergency-is completely unknown. You could have a matter of seconds before the fire incapacitates you or causes a catastrophic engine or airframe failure, or more than enough time to find the nearest airport and land. In any event, an in-flight fire is nothing to mess with.

According to a recent study based on actual events, the elapsed time between the first indications of a hidden fire and the point at which an aircraft becomes catastrophically uncontrollable has ranged between seven and 35 minutes, with an average of about 20 minutes. Twenty minutes can be a long time, but the bad news is that those occurrences involved airliners. Things can happen a good bit faster aboard the smaller aircraft you and I fly.

Timing Is Everything
Dont believe it? Consider this example of what happened aboard a Piper Saratoga II. On December 20, 2002, at 2059:41 Eastern time, the pilot of a Piper PA-32R-301T contacted the New York Terminal Approach Control (Tracon) level at 6500 feet. It was good VFR for the night flight. Less than a minute after checking in with the Tracon, the pilot declared an emergency, reporting an engine fire and heavy smoke in the cockpit.

The tower controller turned up the runway lights and called airport emergency personnel. He then made visual contact with the airplane, and saw that all its lights were on, that it was descending and that it appeared to be setting up for a left downwind entry to Runway 36. The tower controller scanned the airplane with binoculars and noticed nothing unusual.

A witness later stated she saw what appeared to be a meteor pass by her kitchen window. The object was dark in the middle, with a red or orange glow around its edge. It was in a steep descent, and appeared to fall straight down before it impacted the ground. It wasnt until later that she learned that the object was an airplane.The Commercial pilot and his passenger died in the crash, which occurred at about 2103 local time. From the initial contact with the New York Tracon to the impact, less than four minutes had elapsed.

Funny As A Heart Attack
The phrase down in flames has become something of a humorous expression, dimmed by time from the ghastly realities of aerial combat in times past. It is often used by the non-pilot population at large in reference to almost any outcome, however trivial, which had not quite gone as favorably as planned. However, as any pilot will tell you, it isnt the least bit funny.

As our Saratoga example demonstrates, in-flight fires, especially those in which the fire is not accessible, have resulted in catastrophic failure and the complete loss of the aircraft. A recent paper on the subject estimates that for Transport category aircraft with hidden fires, only one-third will reach an airfield before the fire becomes uncontrollable. (The good news for us at least is that for most of our general aviation airplanes, we dont really need an airfield, if the situation starts heating up. So to speak.)

Job One
Put simply and colorfully, theres no reason to screw around with even the possibility of an in-flight fire. As we have so often preached before, the fact of a fire means you just sold your pride and joy to your insurance company. Your new job is to present the wreckage to the adjuster with the ability to walk into your bank, unassisted, to deposit the check. The quicker you get the airplane on the ground-anywhere-the better will be your chance of realizing these goals.

Of course, it may not be as simple as it sounds. For example, you could be cruising at FL200 with low IMC underneath you, requiring an approach. Or, you could be over water, say Lake Michigan in winter or en route to the Bahamas. In either situation, youve got to get the airplane down and stopped so you can get out of it. Theres little choice.

Reacting
The sidebar (Fire Causes, Indications, Actions) explores some causes, indications and options for in-flight fires. While descending and planning your emergency landing-and, again, make no mistake, this is an emergency-there are still a few things you and/or your passengers can do.

When a fire is discovered, your focus should be on extinguishing it and then following up, rather than delaying your efforts while you search around for the Halon. Obviously, the source of the fire is the primary consideration. For example, if its electrical in nature, shutting off the master switch should remove the ignition source, unless the fire involves the battery itself or some hard-wired circuit. Same thing for a fuel-fed fire: Turn the fuel valve to off. Yes, you will lose your ability to navigate/communicate or youll be engine-out, but that doesnt matter anymore. Maybe ATC will wonder whats going on. Tough-unless the Tracon building is on fire, the controller will probably sleep in his or her own bed that night.

Whether the fire is electrical or fuel-fed, the real problem is what else might have ignited: insulation, carpet, plastic trim, etc. Extinguishing these items is the next task, and thats why you mounted that FAA-approved fire extinguisher in an accessible location, right?

If you have a cockpit fire but cant get to the extinguisher fast enough, other things can be used as stopgap measures while you or your passengers prepare to get out the heavy artillery. Non-alcoholic beverages can be used on carpeting (although no water-based extinguishers should ever be discharged into electrical panels, or any grease or fuel fire on a non-porous surface). A carbonated beverage, shaken and then opened so that its contents are sprayed at the base of a fire, may be used in a pinch. (Halon is three times as effective as carbon dioxide.) Blankets or pillows can be used to smother a fire (though possible out-gassing of synthetic materials from an intense fire could make things worse).

Using Extinguishers
Remember that handheld fire extinguishers are designed with a central siphon tube extending to the bottom of the canister in order to collect as much of the contents as possible from that point. Thus, they are meant to be operated while being held in the upright position. Holding them sideways or turning one upside down to aim under the control panel for example will drastically reduce its fire-fighting capacity.

Remember, also, Firefighting 101: attack the base of the fire at the near edge first, rapidly sweeping back and forth and progressing towards the back of the fire. Since the effective duration of most small handheld extinguishers is only eight to (at most) 25 seconds, time counts. Dont waste time or extinguishing agent by discharging the bottle needlessly.

Ventilating the cockpit after discharging the extinguisher is a good idea, unless the fire isnt out. This reduces exposure to the gases produced. However, if a cockpit or instrument panel fire has not been extinguished, there is the irony that your attempts to ventilate the cockpit of smoke and fumes may also provide air for the situation to continue or become worse. Some authorities advise that once youve vanquished the fire or smoke, you should carefully reset the electrical system, as recommended in the POH. Me, Im going to land, pronto, and get an A&P to look at it later.

Conclusion
Its easy to say, but the main thing to remember is that if you ever do suddenly find yourself in the skywriting business, keep a cool head. As much as the thought of an in-flight fire may strike terror into a pilot, in most fire-related accidents the pilot is either overcome by smoke or panics and loses control. Get the airplane on the ground.

Also With This Article
“Fire Causes, Indications, Actions”
“Tools You Can Use”
“Swissair Flight 111”