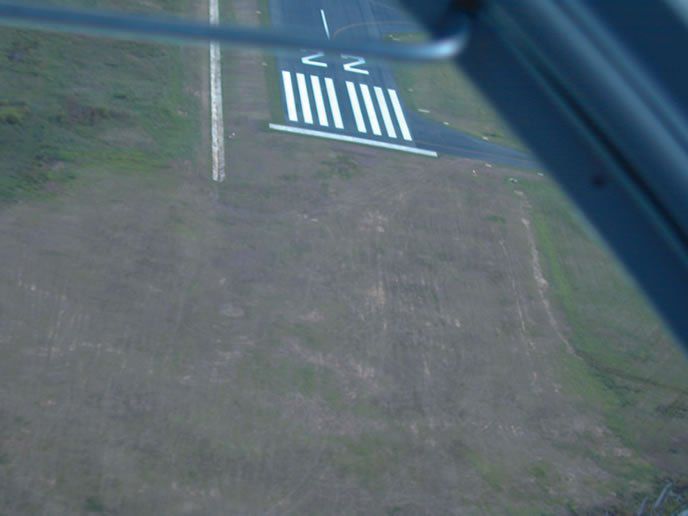 Not all approach procedures are aligned with the runway on which we want to land. Once we have it in sight, to get from the procedures missed approach point (MAP) to the desired runway, we may need to maneuver well within 1000 feet agl in low visibility, and do it at a relatively low airspeed to remain within airspace protected from obstacles. Its called circling to land, and is one of IFRs red-headed stepchildren: a visual maneuver, with IFR constraints.

Sadly, a few of us each year prang airplanes while circling to a runway after an approach. To learn more about how and why, we looked at a collection of recent accidents during circling maneuvers. They all seem to have a few things in common, like banking too steeply in turns and letting the airplane descend too early.

Categories
In looking at the five representative accidents summarized on page 22, one thing that jumped out at us was the aircraft involved: the Malibu Mirage JetProp is a turboprop conversion, so there were no piston singles. To be sure, piston singles crash while circling, but the record often isnt detailed enough to suit.

The others were twins, including a twin turboprop, except for a jet warbird, the L-39. Although we dont know for sure, its likely none were circling as a Category A aircraft, one with an approach speed (VREF, or 1.3 * VSO) below 90 knots, but instead were in Category B, for approach speeds of 91 knots to 120. The L-39 and the 690B may have been circling in an even higher category.

Why might that be a factor? Well, the faster were flying, the greater is the radius of turn for a given bank angle. In other words, the circle made at 90 knots and 30 degrees of bank is smaller than the one at 120 knots and 30 degrees. At night and/or in low visibility, when its most important to stay as close to the center of the airport as possible while maneuvering for a landing is not a good time to be making large-radius turns, the kind wed be making at a higher speed. The good news is we were guaranteed at least 300 feet of obstacle clearance when circling in the correct category.

The better news is the FAA recently revised its criteria to increase the amount of protected airspace operators may use for circling approaches. The new criteria were established in 2012 and began phasing in during 2013. The tables on page 23 compare the old criteria with the new. There is no free lunch, of course, so remember that the new circling criteria expand the area of protected airspace, generally, by raising circling minimums themselves, to provide more obstacle-free airspace in which to perform the maneuvers.

Steep and Slow
Flying slowly close to the ground while maneuvering isnt inherently dangerous; we do it every time we take off or land. But were generally not banking too much during those routine operations. Whats not routine for most of us is flying slowly, and turning, close to the ground. Which almost exactly describes circling to land.

At altitude, in good VFR, sloppy technique might cost you 150 feet in a 20-degree-banked turn for a few moments, before correcting. We cant safely fly a circle-to-land maneuver with tolerances that loose, especially at night or in poor visibility. Which is one of the underlying causes for the accidents we examined.

Take the Aerostar at Casterton, Texas, in March 2012. According to the NTSB, the pilot decided to circle to land with full flaps while maintaining an airspeed of 140 mph. The airplane entered an unusually high sink rate during the turn; the pilot added full power and leveled the wings, but the airplane continued to descend. The airplane impacted the ground off the end of and to the right of the runway. None of the three aboard were injured.

The Twin Commander/Rockwell 690B accident is similar. The NTSB again: Radar data and an air traffic controller confirmed that the airplane was circling at or below the minimum descent altitude of 720 feet (708 feet above ground level [agl]) while flying in and out of an overcast ceiling that was varying between 600 feet and 1100 feet agl. The airplane was flying at 100 knots and was close to the runway threshold on the left downwind leg of the airport traffic pattern, which would have required a 180-degree turn with a 45-degree or greater bank to align with the runway. Assuming a consistent bank of 45 degrees, and a stall speed of 88 to 94 knots, the airplane would have been near stall during that bank. If the bank was increased due to the tailwind, the stall speed would have increased above 100 knots.

There were four fatalities. The NTSB concluded, Thus, it was likely the pilot encountered an aerodynamic stall as he was banking sharply, while flying in and out of clouds, trying to align the airplane with the runway. Whats the fix for accidents like this? Two things come to mind.

The first? These two accidents are great examples of non-stabilized approaches. Eliminating the risks that kind of maneuvering presents is what the stabilized, constant-angle non-precision approach was designed to do.. On this approach, it was time to go around a few minutes earlier: add power, establish a climb and turn toward the final approach course to join the miss.

The second thing that comes to mind is most of us really arent very good at this kind of maneuver. Were great at straight and level, procedure turns and holding, even hand-flying an ILS. But when it comes to performing 45-degree-bank turns at 1.3 * VSO, or VREF at around 300 feet agl, we fall down. So, maybe we shouldnt do them in anger if we havent done some recently, in good conditions, for practice.

Look Out Below
Another theme running through these accidents is descending below the circling minimum descent altitude (MDA). The idea on some pilots part seems to be they can descend below the MDA once the runway is in sight, regardless of whether its wise to do so. Much better idea to stay as high as you can for as long as you can, rather than drag a wingtip turning final, or getting behind the airplanes energy management curve and being forced to drag it in to a landing with near-full power.

In fact, the Aeronautical Information Manual tells us so: Published circling minimums provide obstacle clearance when pilots remain within the appropriate area of protection. Pilots should remain at or above the circling altitude until the aircraft is continuously in a position from which a descent to a landing on the intended runway can be made at a normal rate of descent using normal maneuvers. (emphasis added)

Perhaps another thing going on they could be a number of good reasons for descending below MDA, including I guess its easy to suggest someone may misread the plate and drive on down to the straight-in MDA, then begin to circle. Though there seems to be more going on with the Malibu Mirage, according to the NTSB.

Given the lack of any mechanical deficiencies with the airplane, it is likely the pilot was either confused about the proper approach procedures, or elected to disregard them, and abandoned the instrument approach prematurely in his attempt to find the runway. It is unknown why he decided to do a circle-to-land approach, when the tailwind component was slight, and the shorter, simpler, straight-in approach was a viable option. Likewise, it is unknown why he flew towards rising terrain on the north side of the runway, contrary to the published procedures. From the witness statements, it appears the pilot was hunting for the airport, and intentionally dove the airplane towards what he perceived was an area close to it. In the process, he probably saw trees and terrain, attempted to climb, but was too low to avoid the trees. Its not clear from the record if this pilot ever saw the runway, despite descending below minimums.

Stabilizing the circle
We noted earlier how unstablized these approaches appeared from the NTSB record. It seems there were several things going on at once in many of them. Whats a stabilized approach? Can its characteristics be applied to circling, inherently an unstabilized maneuver?

The Flight Safety Foundation (FSF) defines a stabilized approach using a list of nine recommended elements, leading off with the aircraft being on the correct flight path. With respect to circling approaches, the FSFs ALAR Briefing Note 7.1 states the airplanes wings should be level on final when the aircraft reaches 300 feet above airport elevation to meet its idea of a stabilized approach. The FSF definition is more attuned to heavy transports with multi-pilot crews; what about the rest of us? How to go about stabilizing the circling approach. Here are some rules to consider.

First, there should only be two descents during a circling approach. The first happens on the final approach course, on which we descend to the circling MDA and no lower. Once reaching it, we need to make a decision to accept the conditions and maneuver for the next descent, or execute the miss. The next and final descent comes once were in position, as the AIM describes.

Second, all this happens at the trimmed airspeed and in the approach configuration; for most of us, gear down, with a notch of flaps. Use power as necessary to manage the descent rate and to level off at the circling MDA.

Third, our flight path must be stable. This means constant-bank, level turns (unless descending for final) and constant-rate descents. To descend, reduce power and maintain the desired (VREF) airspeed. To turn, dont bank more steeply than 30 degrees. Anything steeper and you risk trading too much vertical lift for its horizontal component. And thats a bad thing close to the ground.