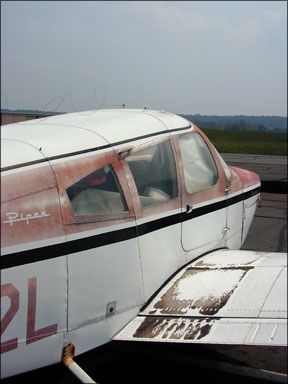 The question comes up time and again in the FBOs pilot lounge and on aviation-related forums: Does a known fault make an airplane unairworthy? Time and again when faced with this question, I hear the response, “TOMATO FLAMES” for an aircraft in VFR-day conditions, a mnemonic referring to the items required under FAR 91.205 for day VFR. This is part of the answer, but it is neither the beginning nor the end of determining the airworthiness of an aircraft with a known fault.

Instead of a simple, “one-size-fits-all” answer, exploring existing regulations, legal decisions and legal interpretations should guide a pilot or owner in determining whether or not an aircraft with known faults is airworthy. First, lets define “airworthy.”

Somewhat surprisingly, “airworthy” isnt defined by the FAA, at least not in FAR Part 1, Definitions and Abbreviations. In 1994, Congress took it upon itself to describe an “airworthiness certificate” as something the FAA Administrator shall issue when he or she “finds that the aircraft conforms to its type certificate and, after inspection, is in condition for safe operation.” Very little additional guidance is available from the 350-plus pages of FAA Advisory Circular AC 8130.2F, Airworthiness Certification of Aircraft and Related Products. When attempting to define “airworthy,” the AC basically reaffirms what Congress said.

So, as long as we comply with Part 21 (Certification Procedures for Products and Parts), Part 43 (Maintenance, Preventive Maintenance, Rebuilding, and Alteration), and Part 91 (General Operating and Flight Rules), and keep the airplane registered in the United States, it is airworthy. Gee, that cant be so hard, can it?

When faced with inoperative equipment a pilot should first reference FAR 91.213, Inoperative Instruments and Equipment, plus AC 91-67, Minimum Equipment Requirements for General Aviation Operations Under Part 91. The first three paragraphs of FAR 91.213 deal with MELs (minimum equipment lists). Most GA pilots dont fly airplanes with MELs, so we wont spend much time dealing with them here.

First, an MEL is a precise listing of instruments, equipment and procedures that allows an aircraft to be operated under specific conditions with inoperative equipment. MELs are approved by the FAA for specific tail numbers equipped with specific equipment. So, for example, you cannot use a generic MEL for a Cessna 182. You must use an MEL approved by the FAA for a specific Cessna 182 by tail number; any items installed or modified in the aircraft under an STC invalidates the current MEL.

All these steps, procedures and limitations outlined in the MEL must be followed in order for the airplane to remain airworthy. Pilots who fly under Part 135, or pilots who rent airplanes flown under Part 135, may encounter MELs: If this is you, then getting specific training on how to deal with them to ensure compliance and safe operations is a good idea.

The second portion of FAR 91.213, beginning in paragraph (d), covers procedures to be followed for aircraft with inoperative equipment and instruments, but which lack an approved MEL. In other words, the rest of us. The steps to follow are listed in 91.213(d)(2).

Whats that you say? You dont have a copy of FAR 23 in your FAR/AIM manual? Most pilots dont, much less a copy of CAR 3. Not knowing the regulation, however, is no excuse, as one pilot found out.

In a 1992 decision, The FAA vs. Dennis D. Nielsen (NTSB Order No. EA-3755), a pilot had his pilot certificate suspended for 30 days for knowingly flying a Cessna 150-an airplane certified under CAR 3-with inoperative carburetor heat. You wont find carburetor heat listed as a required item in any of the other references, yet it is required for carbureted engines under CAR 3 and FAR 23.

Even though the pilot in question was told by a mechanic that carburetor heat was not required for flight, the judge stated “…that the unavailability of carburetor heat was serious: respondent should have known the aircraft was not in compliance with its type certificate and was unsafe to operate” (emphasis added). For those interested in reviewing CAR 3, use this link: tinyurl.com/yfyurt9.

While not specifically mentioned in FAR 91.213, its implied an aircraft must also comply with its type certificate data sheet (TCDS) and any supplemental type certificates (STCs) installed. A good example of the latter is the requirement for most airplanes equipped with autopilots to have the autopilot manual handy for in-flight reference. I have pre-flighted numerous airplanes equipped with autopilots but which lacked the relevant manual-a condition technically making the airplane unairworthy.

The question of the equipment required for kind of operation to be conducted Kinds of Operations Equipment Lists is often answered in Chapter 2 (Limitations) of the POH/AFM. This will list the different flight conditions for which the aircraft is certified-Day VFR/ Night VFR, etc.-and the equipment that must be operational in these flight conditions. Very simply, if the equipment is not operational, flight under the listed conditions is not permitted. The Diamond DA40, for example, requires a heated pitot tube for night VFR flight; under FAR 23 this equipment is only required for IFR flight.

The next step in 91.213(d)(2) refers the pilot to 91.205 “…or any other rule of this part for the specific kind of flight operation being conducted.” This is the infamous “TOMATO FLAMES” for VFR flight or “GRAB CARD” for IFR. As can be seen, there are many steps involved before getting to these mnemonics, and they are not the final word in determining aircraft airworthiness. The regulations catch-all phrase, “…any other rule of this part…” could refer to a parachute for aerobatic operations, transponders or two-way radios in Class A/B/C/D airspace, or to any other item in the FARs.

Finally, FAR 91.213(d)(2) states the inoperative equipment must not be required by an airworthiness directive (AD). An example of this would be the vented fuel caps required in each fuel tank of 100- and 200-series Cessnas.

If youve gotten this far and determine an inoperative item is not necessary for your flight, FAR 91.213 goes on to inform us what to do with it. The item must be removed, the cockpit control placarded and the maintenance recorded in accordance with FAR 43.9; or the equipment must be deactivated and placarded “inoperative.” If the process of deactivating the equipment requires maintenance, then again it must be recorded in accordance with FAR 43.

The process of deactivating the equipment has recently come under scrutiny after the fatal crash of a Cessna 310 with a history of a short-circuit in its weather radar system. On the accident flight, an electrical fire broke out when the circuit breaker was reset once too often. (If an item continuously causes a circuit breaker to pop, the offending circuit breaker should be collared to prevent pilots from resetting it.)

In order for the pilot to deactivate an item or system, it must fall under FAR part 43, Subpart A; otherwise the work must be done by a certified mechanic. If the item is removed instead of rendered inoperative, “A person authorized by FAR 6 43.7 must make the appropriate adjustments to the aircrafts weight and balance information and the equipment list, fill out and submit FAA Form 337, and approve the aircraft for return to service.”

So now were ready to fly…right? Well, not quite. There is a final, logical step. A determination must be made by an appropriately rated pilot certified under Part 61, or by a certified mechanic, that the inoperative equipment does not pose a hazard to flight. Yes, it is logical…but sometimes the FAA must spell out its logic. Dont fly if you feel it is unsafe to do so with the airplane in its current condition. Also note the italics: A student pilot is not authorized to determine the aircrafts airworthiness.

If after going through these steps you determine that the aircraft is not airworthy, you are not necessarily stuck. The last paragraph of 91.213 states that you may apply for a special flight permit in accordance with FARs 21.197 (Special Flight Permits) and 21.199 (Issuance of Special Flight Permits). Generally, a special flight permit is granted to permit ferrying of an otherwise unairworthy but safe aircraft to a place of maintenance or to evacuate it from an area of impending danger.

While these rules may seem overly burdensome at times, they are there for the safety of the pilots who operate aircraft and the passengers we haul. The NTSB accident data base is unfortunately full of cases where pilots took off with known deficiencies.

Be safe out there.