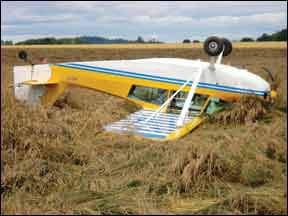 Anyone spending much time around personal aircraft sooner or later will be forced to confront the increased risk flying them can entail. It might be after a close call in the traffic pattern, or a rough-running engine without a decent landing area in sight. And we won’t even mention trying to intelligently discuss general aviation safety with a skeptical co-worker, nosy neighbor or unimpressed mother-in-law who’s convinced those little airplanes we fly are deathtraps.

The fact is, flying personal airplanes does increase our risk of death or injury. So does engaging in many other activities—skiing, motorcycling, rock climbing, scuba diving—as well as things as mundane as commuting to work or taking a shower. Basically, everything we do carries some risk. Understanding and mitigating those risks is key to our longevity. So it is with general aviation. In fact, recent accident statistics paint a clear picture of the riskiest things we can do with personal airplanes. By noting what they are and understanding them, we can make informed decisions about what not to do and when not to do it.

That’s a fairly standard definition, but encompasses a wide variety of operations. Some examples include public aircraft operations (like EMS helicopters, law enforcement, wildlife spotting and tracking, and fire-fighting), Alaska bush flying, energy exploration…you get the idea. By no means is this definition of general aviation restricted to, for example, a pilot on a cross-country flight for personal transportation, one of the safest ways to get from A to B.

Another type of operation traditionally riskier than average involves experimental aircraft. Earlier this year, the NTSB initiated a study of accidents involving experimental, amateur-built (E-AB) aircraft. According to the NTSB, “Of the approximately 224,000 general aviation (GA) aircraft in the U.S., about 33,000 of them are classified as E-AB…. Unfortunately, this group of aircraft has, for several years, experienced accident rates greater than those of other comparable segments of GA.” Among the study’s first steps was conducting a survey of E-AB owners and operators, performed in conjunction with the Experimental Aircraft Association. We’ll likely hear more about the NTSB E-AB study and report on its results and recommendations, if any, as appropriate. Meanwhile, the sidebar on page 7 reproduces some data on E-AB aircraft safety from the AOPA Air Safety Institute’s 2010 Nall Report

There’s no question general aviation operations encompass a wide variety of aircraft, people, geography, skill and missions. It’s probably unfair to lump all of them together and then conclude the 1000-hour, instrument-rated pilot flying a well-maintained personal airplane is doing something dangerous. But that’s where we are, and there are a few reasons for that reaction. Let’s explore them.

Got Gas?
To us, fuel-related accidents are the most frustrating, because they’re also the most preventable. In our view, there’s simply little excuse for running out of fuel or not knowing how to configure the aircraft’s fuel system to keep the engine(s) running.

The 2010 Nall Report notes the “number of fuel-management accidents has dropped by more than half since 1999, and they now represent about six percent of all non-commercial fixed-wing accidents compared to 10 percent a decade earlier. Technological improvements involving fuel-flow computers and glass cockpits as well as increased pilot awareness have both contributed to this encouraging trend.” Two charts on fuel-related accidents from the report are reproduced at right.

That’s certainly good news, but we still see too many accident reports including some variation on the following: “Investigators noted the absence of a fuel spill at the accident site.” Again, these types of accidents are entirely preventable. When considering how we might enhance the safety of our  operations and further minimize the risks, ensuring we have enough fuel for the mission—or stopping somewhere to get more, even if it means remaining with the airplane overnight until the FBO opens the next morning —should be a no-brainer.

Weather
Another perennial—and avoidable—accident cause is flying into adverse weather. Accidents of this type can take many forms—the classic VFR-into IMC accident, thunderstorms and icing, to name a few—but in our view all have a common theme: failure to plan. The planning failure can be encountered at any step in the flight’s progression, including pre-flight, while en route or when approaching the destination.

When considering a proposed flight from the comfort of our home, office or FBO ready room, too often we think it all will go as planned, and the weather will not be a factor. Once we get airborne and on our way, we can spend more time futzing with the mixture and marveling at how the moving map just keeps scrolling downward toward the little white airplane symbol and forget all about monitoring en route and destination weather. Then, we’re all surprised when the destination is at minimums, there’s a thunderstorm sitting over the final approach fix or headwinds force us to declare minimum fuel.

Of course, the most common weather-related accident is the classic VFR-into-IMC situation, involving a VFR-only pilot who suddenly finds him or herself unable to maintain control by reference to the natural horizon. One of the more common scenarios of how pilots get into such a situation involves scud-running—trying to sneak under lowering clouds—on their way somewhere else.

Other weather-related accidents involve thunderstorms (see this month’s Accident Probe installment, beginning on page 24), icing  or turbulence. There is good news, however, according to the 2010 Nall Report: “The 62 percent lethality of weather accidents was still the highest of any major category, but less than two-thirds for the first time, and well below the overall 75 percent during the preceding nine years. This is the first meaningful improvement in the weather accident record of the past decade; compared to the peak year of 2004, the number of accidents was more than one-third lower, and the number of fatal accidents decreased by more than half.”

As with other habitual accident types we see, avoiding weather-related mishaps isn’t hard. Get a complete pre-flight briefing for your route before heading to the airplane. Monitor the weather along the route and at your destination—in-cockpit systems like WxWork or XM Wx are excellent tools for this. Pick up the mic, dial in Flight Watch on 122.0 MHz and ask for updates.

If icing conditions exist, modifying your departure time a few hours either way, flying at a different altitude or altering your route usually works quite well for us, and we’ve never spent quality time with a known-ice airplane. Even if we had, we wouldn’t be using the anti- or de-ice systems to remain in icing conditions—we’d be using them to ensure we got out or through them as soon as we could.

A final word on weather-related accidents involving thunderstorms: With modern reporting and forecasting capabilities, plus airborne Nexrad displays, there’s simply no excuse these days for flying into a thunderstorm. Land and wait out a squall line. Delay your departure. Or leave earlier. Fly around them. Carry plenty of fuel. And stay VFR, so you can see them and avoid them.

Low-Level Maneuvering
Stupid pilot tricks always get mentioned any time personal aviation safety is discussed. And there always are plenty of examples to keep tongues wagging and heads shaking. Intentional low-level maneuvering is one of them, and there’s perhaps no other single high-risk thing we can do in a personal airplane than fly it close to the ground at high speed for no good reason.

Of course, there are two kinds of low-level maneuvering with which we should be concerned: so-called “buzzing” and scud-running. Both are lethal and equally avoidable. Scud-running, of course, also can lead to a VFR-into-IMC situation or a CFIT accident. With the proliferation of cellphone towers, it’s gotten much riskier than, say, 20 years ago. The buzzing type of low-level maneuvering, however, will always be with us in some form as pilots try to show off their skill and daring.

The 2010 Nall Report, one more time: “While a higher proportion of weather accidents are fatal, more fatal accidents occur in maneuvering flight than any other pilot-related category, a pattern that continued to hold in 2009. Thirty-nine of 67 were fatal (58 percent), a decrease from 66 percent the year before but toward the middle of the range for the preceding decade. Some of the accident maneuvers (such as turns in the airport traffic pattern) were necessary but poorly executed. Others were risky activities like buzzing attempts, low-altitude night flights, or attempted aerobatics by untrained pilots and/or in unapproved aircraft. Most were initiated at low altitudes, giving the pilots little time or room to respond if anything went wrong.”

And that’s one of the keys to avoiding a maneuvering accident: ensuring there’s enough altitude available for a recovery if something goes wrong. Which it will, even for well-trained and experienced aerobatic pilots. Additionally, many pilots decide to perform impromptu aerobatics in an airplane either not approved for it or, if approved, not properly loaded. Rolling a non-aerobatic airplane isn’t all that hard, but it is riskier than keeping it straight and level, or refusing to bank more than 60 degrees. It’s especially risky without training, which should include a strong emphasis on having enough altitude for recovering a botched attempt.

Minimizing Risk
Flying personal airplanes is, has been and always will carry with it some element of risk. Putting it bluntly, how we go about identifying, managing and minimizing that risk will determine how often and for how long we get to fly.

It’s impossible to summarize the lessons we should internalize from even a casual glance at the accident record. “Don’t do anything stupid” doesn’t seem to be making it. Likewise, “How will this look at the enforcement hearing?” hasn’t penetrated too far.

In our mind, however, if there’s anything the accident record should be telling us it’s this: We are our own worst enemy. Yes, mechanical failures happen; yes, events beyond our control do occur. But it’s not rocket surgery to know and understand we have to keep fuel in the tanks, or we shouldn’t fly into or near a thunderstorm, or starting to loop a Skyhawk from 1000 feet agl isn’t a good idea.

Avoiding these kinds of accidents isn’t that hard: Make sure you have fuel aboard, don’t perform low-level maneuvers, stay out of weather for which you’re not trained or equipped and refuse to engage in high-risk operations without the necessary training and equipment.