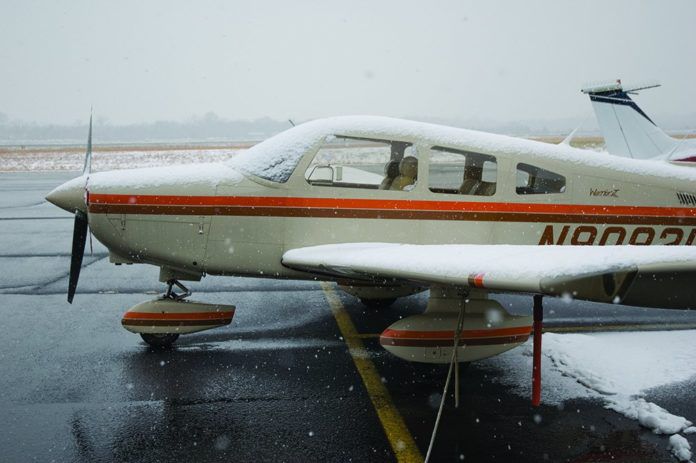 A popular urban legend maintains there are dozens of words Eskimos use to describe snow. The truth, according to scholars, is there are numerous dialects of the Eskimo, Inuit and Sami languages describing frozen moisture and they all add suffixes to root words to refine concepts, just as with English and other languages. Whether we call it snow, ice, slush, a wintry mix or something more colorful, when it gets on our airplane it’s all the same: contamination.

Ice, snow or frost adhering to our wings and other control surfaces add weight and drag, and can change way air flows over and around the airframe, making an otherwise “clean” air flow “dirty.” How dirty? Let’s drill down a little bit into the underlying aerodynamics of airframe contamination for a better understanding of what the difference between a clean and contaminated airplane can mean.

Going with the Flow

According to Bernoulli’s theorem, airfoils work because the leading edge divides air into two streams. The air traveling over the cambered side of the airfoil flows a greater distance and therefore must travel at a slightly higher speed. This faster flowing air on the top creates lower pressure. Depending on the airfoil, about 50 percent of the lift produced is from this low-pressure effect, with the remainder generated by ram air.

Laminar flow occurs at low Reynolds numbers where viscous forces are dominant. It is characterized by smooth, constant fluid motion. Turbulent flow, laminar flow’s evil twin, occurs at high Reynolds numbers, where inertial forces are dominant. These inertial forces tend to produce eddies, vortices and other chaotic flow instabilities, which are caused by the turbulent separation of the boundary layer from the surface moving through the fluid.

The break point from laminar flow to turbulent flow is a phenomenon that initiates at the boundary layer, where viscous forces have a much greater impact. In fluid mechanics, changes in boundary layer conditions (e.g., surface roughness or contamination) have an amplified effect on the behavior of this transition from laminar to turbulent flow. This transition perhaps is the most critical factor when we examine the effects of wing contamination.

Basically, when a wing is generating maximum lift in flight, the top and front of the wing is dominated by laminar flow. The area behind the trailing edge is dominated by turbulent flow. Typically there is a breakpoint between these two different flow regimes. As the angle of attack increases, the breakpoint where laminar flow separates from turbulent flow migrates forward from the trailing edge toward the front of the wing. As the area of turbulent flow increases, two things begin to happen simultaneously: drag increases and lift decreases.

As the wing approaches its critical angle of attack, the point where laminar flow separates from turbulent flow moves forward along with the center of pressure (the focal point of lift). At the critical angle of attack, the wing stalls when induced drag (airfoil drag) exceeds the lift needed to support the weight of the aircraft. When the wing stalls, the center of pressure moves rearward, causing the longitudinal instability associated with stalls.

It seems obvious that a coating of frost, ice, or snow would add to the roughness of the wing surface, increasing skin friction and therefore increasing drag. But airfoil contamination is not simply a matter of additional friction from the airflow. Aerodynamically, there is a lot more going on that pilots should understand.

Drag has two components: parasitic drag and induced drag. Parasitic drag is created by the parts of the aircraft that do not produce lift, like antennas, landing gear or struts. There are three types of parasitic drag: form drag (from blunt, non-lift producing surfaces), interference drag (from mixing air flows) and skin friction. The other major component of total drag is induced drag. As its name implies, induced drag is produced by the generation of lift, and it increases as the angle of attack increases.

Obviously, frost, ice, or snow contamination contributes to skin friction, but it also reduces the overall aerodynamic efficiency of an airfoil. When a wing is even modestly contaminated, it requires an increased angle of attack to generate the same lift as an uncontaminated wing. This means contaminated wings suffer more induced drag.

And here’s where it gets worse. Wind tunnel tests with a mix of smooth and rough surfaces on airfoils show that the point of separation from laminar to turbulent flow preferentially favors areas of increased roughness. This early separation of airflow due to contamination results in even higher induced drag at any angle of attack. What you need to know is the very real increase in contamination-caused parasitic drag is small when compared to the increase in induced drag.

Unintended stalls are no fun, even on a clean, functioning airfoil where the break is relatively predictable and the critical angle of attack does not vary. On a contaminated wing, however, the roughness in the laminar region of an airfoil causes the point of separation between laminar and turbulent flow to move upstream from its normal position in a non-uniform and non-predictable way. This upstream movement dramatically decreases the maximum lift coefficient at relatively high angles of attack, leading to premature stalls.

More horribly, since contamination is often distributed unevenly, the stall break will not be typical. There may not be a typical pre-stall buffet warning you of what’s about to happen, your stall horn may not help and even an angle of attack indicator won’t tell you when the stall will occur because its warning zones aren’t calibrated for a contaminated wing.

Nothing New Under the Sun

Just as we knew long ago that a dirty wing is a bad thing, what can cause contamination also is well known. In a 1939 lecture on aviation safety at Norwich University, Jerome Lederer, who some consider the father of aviation safety, said, “Strange as it may seem, a very light coating of snow or ice, light enough to be hardly visible, will have a tremendous effect on reducing the performance of a modern airplane.” This phrasing, in addition to the “test data” warning highlighted in the sidebar on the previous page, still makes its way into pilot operating handbooks.

Similar sentiments and requirements for aircraft cleaned of snow, frost and ice were codified by FAA predecessor agencies and remain as prohibitions in FARs 121.629, 135.227 and 91.527. These rules apply to pretty much anything that flies and prohibit takeoff when frost, snow or ice is adhering to wings, propellers or control surfaces.

A September 2006 Safety Alert (SA-06) from the National Transportation Safety Board (NTSB), Aircraft Icing, warns pilots to “beware of aircraft upper wing surface ice accumulation before takeoff.” These principles and behaviors underlie FAR 91.527, which states, “No pilot may take off an airplane that has frost, ice, or snow adhering to any propeller, windshield, stabilizing or control surface; to a powerplant installation; or to an airspeed, altimeter, rate of climb, or flight attitude instrument system or wing, except that takeoffs may be made with frost under the wing in the area of the fuel tanks if authorized by the FAA.”

That last part about frost in the area of fuel tanks is an interesting catch. Since we’ve seen frost form on tanks containing super-cooled fuel in warm-weather conditions, it’s something you might want to follow up on.

Even with nearly a century of warnings, pilots continue to depart with dirty wings and tails. According to 2009 article in FAA Aviation News, “High-wing airplanes account for two-thirds of general aviation icing takeoff accidents, perhaps because the upper wing is more difficult to see and reach on preflight.” High-wing pilots can’t easily see the state of the top of the wing without the aid of steps or a ladder, so their failure to check results in more accidents.

The same article noted that take-off related accidents involving ice and small airplanes showed that, in most cases, the pilot did not de-ice the airplane before attempting to fly. In at least half of those accidents, the pilot knew about snow, ice or frost contamination before takeoff, but failed to adequately remove it.

Winter preflight inspections should include physically touching critical surfaces to ensure they are contamination-free. This includes propellers, pitot tubes and even places like induction openings. If they are contaminated, they need to be cleaned completely. In northern climates and in the dead of winter, it will require a lot of physical work, and even more if you have a high wing.

Regardless of how you free your plane from frost, ice or snow contamination, be it a hangar, de-icing fluid, scraping or simply pointing the wings into the sun and waiting, you must make sure contamination does not refreeze on or inside your aircraft. Once you are taxiing your clean aircraft, make sure that controls are free and correct before taking off—stray liquids can refreeze once in the air or at altitude. Before takeoff and after thawing out an aircraft, always check to make sure water isn’t accumulating in critical areas. These include control surface hinges, the control surfaces themselves, flap tracks or in the tail; basically anywhere refrozen water can have a bad outcome.

Keeping it clean means no snow, frost or ice on any critical aircraft surface. Don’t get caught flying dirty.

Mike Hart is an Idaho-based commercial/instrument pilot and proud owner of a 1946 Piper J3 Cub and a Cessna 180. He also is the Idaho liaison to the Recreational Aviation Foundation.