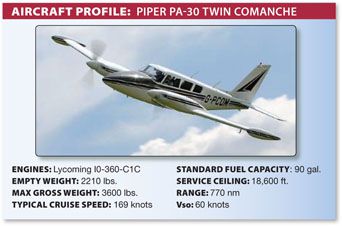 Its rare to find even a brand-new airplane without at least one squawk-a mechanical deficiency. Of course, the FAA would say that all equipment and components of an aircraft must be working properly or placarded as inoperative, else the airplane isnt legally airworthy. The FAA will also say that all equipment listed in the aircrafts Type Certificate Data Sheet must be installed and operating for airworthiness, and any additional equipment required by regulation for the specific operation must be in good working order, also.

In the real world, it doesnt work that way, however, and pilots routinely launch a flight with some equipment known to be intermittent, at best. While operating with known deficiencies in equipment is rarely a good idea, there are ways to minimize the risks posed.

The severity of a deferred squawk can prevent some kinds of operations, while making others more risky than they need to be. An example of the former might be a failed navigation light, making night flight illegal. An example of the latter could be an inoperative alternator, which could make just about any flight out of visual range from a non-towered home base a bad idea.

I have, on occasion, flown aircraft with known squawks. It wasnt the smartest thing Ive ever done, but I was careful to ensure there were no other issues with the aircraft, especially the kind that could have complicated the original problem. But I try to draw the line at engine deficiencies, especially with a single. On the few occasions I have had a known engine problem, the only flying I did was either directly over an airport in an attempt to diagnose the problem or the flight to the engine shop. But thats with a single. If I had a twin with a known problem in one of its engines, I dont know if I would be more or less inclined to fly the airplane, either normally or at all. This months example teaches us that known engine problems are a good reason to ground the airplane until the problem can be found and fixed.

Background
On April 4, 2004, at about 1606 Eastern time, a Piper PA-30 crashed onto airport property shortly after takeoff from the Fernandina Beach Municipal Airport, Fernandina Beach, Fla. The airplane was substantially damaged and the Commercial pilot and single passenger were fatally injured. Weather for the planned IFR flight to the Burlington-Alamance Regional Airport in Burlington, N.C., was good VFR.

The airplane departed Runway 26 and its landing gear retracted. After climbing to approximately 200 feet agl, the airplane banked to the left, quickly banked back to the right, and then appeared to stabilize. When next seen, the airplane was in a 25-30 degree left-wing-low and nose-low attitude, which continued until impact. One witness reported a sputtering sound, which he described as being similar to when power is reduced.

The airplane was equipped with a JPI Instruments EDM 760 engine monitor programmed to record the exhaust gas temperature (EGT) and cylinder head temperature (CHT) readings from both engines every six seconds.

Investigation
A review of the pilots computerized flight log revealed two entries describing discrepancies relating to the fuel injector systems of both engines. The first entry said, clogged L3 injector. The second entry read, L4 & R4 injector clogs. Maintenance personnel who performed the last annual inspection on the airplane before the accident reported finding water and corrosion in the fuel strainers, as well as water in the fuel.

At that inspection, a squawk list presented by the owners included, Check complete fuel system due to chronic injector clogging (both engines). This problem only manifests itself if the plane sits for a month or more. If flown regularly it doesnt happen.

Probable Cause
The National Transportation Safety Board determine the probable cause(s) of this accident to include: The failure of the pilot to feather the left propeller and his failure to maintain control of the airplane following a loss of engine power from the left engine resulting in the in-flight collision with terrain. A factor in the accident was the loss of power from the left engine for undetermined reasons.

Its easy and obvious to point to chronic water and debris contamination as the source of the airplanes injector clogs. Whats not so obvious is why the operators didnt demand that the fuel system be more closely inspected.

As we have preached in the past, installing and learning to use an engine monitor, especially one that stores data, can be invaluable when diagnosing operational problems. Its a shame that a definitive examination of this data didnt occur until after the airplane had crashed.