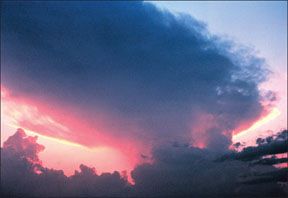 Its spring in North America, and that means changing weather. Already, weve begun to shift our seasonal weather focus away from snow-clogged runways and icing forecasts to brisk winds and fast-moving fronts. Soon, the dog days of summer will be upon us, bringing with them sluggish climbs and overheated pattern work.

Even though the recently concluded winter featured much more convective activity than I seem to remember from recent years, summertime means thunderstorms. The real deal is just a couple of months away, if that. Which prompted us to take a look at thunderstorms and, especially, how they are dangerous, not just why. Sure-theyre bad news and spawn all sorts of nasty weather from which we should gain a healthy respect and an even healthier distance. But is there any common, perhaps expected way that stumbling into a thunderstorm will do us in? Is there a common mistake pilots make-other than getting into the thunderstorm in the first place-that we can maybe avoid? We looked at NTSB reports for calendar year 2004 in which thunderstorms were involved to see if there was anything in common. Heres what we found.

Control Loss
On October 29, 2004, a Beech A36 Bonanza was destroyed on impact with terrain and a post-impact fire near Downing, Mo. The night cross-country flight was conducted under an IFR clearance. The pilot and two passengers were fatally injured. A controller observed the flight enter an area of weather before radio and radar contact was lost. A pilot-rated witness stated, [The a]ircraft spun out of clouds, began recovery, hit the ground, [and] burst [into] flame immediately. Plotted data showed that the airplane entered an area of weather consistent with level three to level four thunderstorm activity. Surface weather observations showed VFR weather was present in the area.

Ten days earlier, on October 19, 2004, a Beech B55 Baron crashed in the Atlanta, Ga., area shortly after takeoff. During the initial climb, the pilot reported that he was in trouble, and shortly afterward, radio and radar contact was lost. The airplane was seen spinning out of the clouds in a flat attitude. Both aboard sustained fatal injuries.Post-accident examination of the airplane revealed no mechanical or flight control problems. A Convective Sigmet was in effect for the area at the time of the crash.

One other thunderstorm-related loss of control accident occurring in 2004 deserves mention here. On September 19, 2004, a Cirrus SR-22 encountered the outer boundaries of severe convective weather at 16,000 feet near Peters, Calif. The airplane subsequently departed controlled flight, leading the pilot to deploy the Cirrus Airframe Parachute System. The airplane was substantially damaged during the parachute landing in a walnut grove. Both occupants were uninjured. Weather and ATC radar imagery depicted the airplane encountering a Level 5 (intense) area of convective activity moments prior to the loss of control.

In these three accidents, a qualified pilot flew a perfectly good airplane into a thunderstorm and lost control. Interestingly, both Beechcraft products aircraft were more or less intact all the way to the ground, dispelling perhaps the notion that all thunderstorm encounters result in an in-flight breakup. We shall see.

The Cirrus doesnt count, since its pilot deployed the parachute. But, based on the outcomes confronting the other two airplanes, its occupants were lucky to be alive.

Also, in all three of these accidents, the pilots knew there were thunderstorms in the area, but for one reason or another continued into them. In the case of the Bonanza and its night flight, its pilot seemingly violated Rule Numbeer One for avoiding thunderstorms: you have to see them to avoid them.

Low-Level Maneuvering
On April 21, 2004, in Willoughby, Ohio, a Piper PA-34-220T Seneca was substantially damaged during a hard landing. The airplane encountered moderate rain and gusty winds as it descended on final approach, then bounced and came to rest on the runway. Subsequent inspection revealed damage to the wing spar, fuselage, both engines and the propellers. A weather observation taken about 16 miles southwest of the accident site included winds from 190 degrees at 16 knots, with 24-knot gusts, and a visibility of eight statute miles with thunderstorm activity. Both aboard emerged uninjured.

Meanwhile, later that year, a Learjet crew disproved the notion that Florida thunderstorms arent as powerful as their brothers and sisters in other parts of the world. On July 19, 2004, in Fort Lauderdale, Fla., a Learjet 55 took off as a VFR positioning flight from Ft. Lauderdale International to Ft. Lauderdale Executive, a very short hop. Low-level windshear warnings were being transmitted and thunderstorms were in the area.

After the short flight, the Learjet was cleared to land and touched down on Runway 31. At that point, a fast-moving thunderstorm enveloped the aircraft, degrading the runway surface with heavy rainfall. Heavy braking and thrust reversers were unable to stop the Lear in the available landing distance and it departed the end of the runway, coming to rest approximately 1000 feet beyond the departure end. No injuries were sustained by the two crewmembers but the Learjet was substantially damaged.

Then, on August 10, 2004, a Mooney M20J was substantially damaged during another hard landing in Durango, Colo. One minor injury was sustained among the airplanes four occupants. The pilot later reported a high sink rate at about 300 feet above the runway. The pilot applied full power, and barely cleared a drop-off at the runways approach end. The right wing dropped; the airplane contacted the runway and veered to the right, coming to rest off the right edge of the runway.

Its easy to second-guess these pilots since, with the exception of the Learjet, there was no thunderstorm over the airport at which they were landing. Instead, the two piston airplanes seem to have encountered a microburst or a sudden wind shift. While none of these encounters were fatal, they did bend sheet metal and could have been much more serious.

In the case of the Learjet, I think this accident falls more into the it cant happen to us and get-there-itis categories than it does one related to thunderstorms. Still, the Learjet accident demonstrates-as do the other two low-level maneuvering encounters with the edges of a thunderstorm-that landings (and takeoffs, for that matter) can easily present abrupt changes in prevailing winds. When that happens close to the ground in the landing or takeoff configuration, there may not be enough time, altitude, energy or reserve power to fly safely out of the situation.

In-Flight Breakup
An in-flight breakup of the airplane Im flying has always been something that terrifies me, despite it being a relatively rare event. Nevertheless, in-flight breakups can and do happen much too frequently.

On February 23, 2004, a Piper PA-46-310P Malibu crashed in Arlington, Ala., after it broke up in flight. Both aboard the high-performance single were fatally injured. A Convective Sigmet for embedded thunderstorms was in effect for the area. The flight was cruising at FL240 when the airplane encountered moderate-to-severe turbulence and heavy rain associated with a thunderstorm. The airplane descended to 3100 feet in a descending right turn over 2 minutes and 10 seconds-a descent rate of more than 9600 fpm.

The airplanes wreckage was located along a debris line extending between 1.31 miles and 1.53 miles. Airframe components revealed overstress fractures; the airframe design limits were exceeded.

Then, on July 18, 2004, a Beech B36TC Bonanza broke apart in mid-air after a thunderstorm encounter near Sylvester, Ga. Its pilot and the three passengers aboard the Bonanza were fatally injured. While the Bonanza was en route at 10,000 feet, ATC advised its pilot of a significant thunderstorm cell 10 miles in front of him, extending 30 miles.

The pilot asked the controller to suggest a heading but ATC advised that there were no openings. The controller then suggested, If you wanted to go eastbound, thats the clearest route-due east about 45 miles, then northbound-thats the clearest route. The pilot replied, Well try that. There were no further transmissions from the accident aircraft. The wreckage path was about 5900 feet in length on a heading of 360 degrees.

Lest you think only piston-powered airplanes are eligible for an in-flight breakup after an encounter with a thunderstorm, consider the January 31, 2004, crash of a Beech King Air C90 in Homestead, Fla.

While en route, ATC advised the King Airs pilot to descend and maintain 2000 feet. Radar data indicates that the airplane made a right descending turn to a southeasterly heading, followed by a left turn to an easterly heading where the airplane was lost from radar while at 2200 feet. Between 1631:04 and 1631:16, the airplane descended 1500 feet. Between 1631:16, and the last radar target 12 seconds later at 1631:28, the airplane descended 3900 feet. Those descent rates work out to 7500 and a whopping 19,500 fpm, respectively.

Weather radar data indicates the airplane encountered Level 2 echoes in the area of the in-flight loss of control. Approximately 10 to 20 miles from the accident site, Level 5 to 6-extreme intensity-echoes were recorded. The NTSBs report dryly states, [d]isintegration of the airplane was noted.

One of the things I hope you picked up from reviewing these three in-flight breakups is the altitudes at which the thunderstorm encounters occurred. The Malibu was at FL240 when it began to come apart, while both the Bonanza and the King Air were in the 9-to-10,000-foot range. As a result, I think its a fools errand to believe one can pick a safe altitude for thunderstorm penetration.

Another thing these three accidents demonstrate is that just about any airplane can come apart easily if they are flown into the wrong place at the wrong time. And theres rarely a good time to be flying in a thunderstorm.

The final takeaway a pilot should obtain from reviewing these three in-flight breakups is that thunderstorms are not to be trifled with. I can assure you-without ever having met them-that the three pilots in these accidents fully intended to avoid an in-flight breakup of their airplanes.The thunderstorms through which they flew had other ideas, however.

Lessons
What are the lessons we can learn from these nine accidents? Keep in mind the initial premise of this article: There is a single event, or sole characteristic, associated with thunderstorms that makes them dangerous. If, by looking at a years worth of thunderstorm-related accidents, we could find a common theme that brought down a bunch of aircraft, then we could relay that information and strongly urge pilots to avoid it. Duh.

Instead, this research leads to the conclusion there are three ways to prevent becoming involved in a thunderstorm-related accident or incident: Avoid, avoid and avoid thunderstorms.