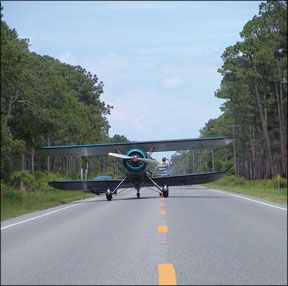 Off-airport landings are a perennial subject whenever pilots get together, and rightly so. Among the topics inevitably coming up will be whether or not to land on a paved road. After all, you probably took off from pavement; why not try to land on it, too, that too-quiet engine in front of or beside you notwithstanding?

We last looked at this overall topic in our December 2006 issue. In that article, we

basically concluded theres no free lunch: While a paved road may offer the smoothest, most-familiar surface, it also poses a set of problems others may not-like wires, cars, signs, utility poles and other things you may or may not see before hitting them.

While you should be able to spot vehicular traffic and avoid it (presuming one or more drivers dont do something dumb, which isnt always a safe presumption), spotting wires, roadside signage and the odd telephone pole from the air isnt the easiest thing to do. If you dont believe us, try it the next time youre out committing aviation. Dont forget youll be a bit distracted and may not have much time dealing with a real emergency: troubleshooting, cinching belts, calming passengers and performing all the other tasks required after the airplane soils the bed.

Statistics show greatly improved chances for the occupants survival when the cabin remains relatively intact. Besides, the airplane just became the insurance companys property; theyll pay for any damage. If there isnt any, the airplane can be yours again without much paperwork, if any.

The most-survivable off-airport landings involve slow, steady deceleration and almost no vertical forces. The best location on which you can achieve the goal of minimizing damage to the passenger cabin may or may not be a road. Instead, a vacant field or even the top of a nearby heavy forest might be better solutions. Water landings, also, have been relatively benign, especially in a retractable and when compared to the various alternatives. Still, a paved road can look very inviting.

To help us all learn more about the idea of landing on a road in an emergency, Aviation Safety is making this a discussion topic for our monthly podcast series, SafetyCast.

Our next installment of SafetyCast will feature Mike Friedman, an attorney and flight instructor who lost his Comanches only engine in IMC near Hazleton, Penn., and safely landed on Interstate 81. Hell be joined by at least one other pilot who was forced to land on a road but whom we could not confirm at this issues deadline.

For details on how to access this podcast, see the box at left.