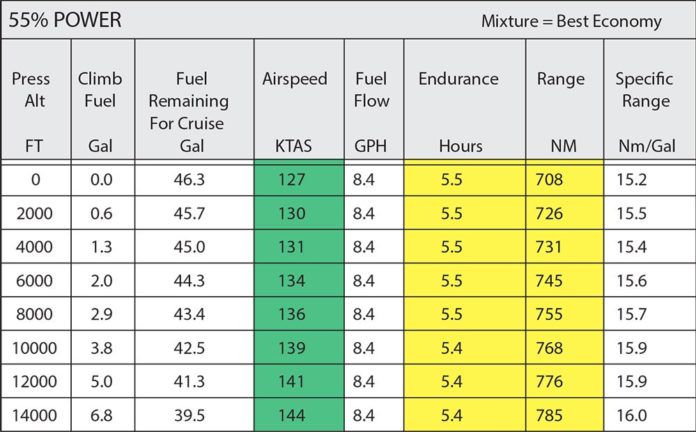 Among the universe of reasons we fly are aerobatics, pipeline patrol, aerial application and photography. Then there’s $100 hamburgers, plus plain old sightseeing. There’s also personal and business transportation from Point A to Point B, which implies a cross-country flight. Normally, we’ll want to make that trip as quickly as possible. But what if we don’t want to fly as fast as our flivver will go?

What if getting to B by burning as little fuel as possible is our objective? Or we want to stay aloft as long as possible? There are speeds to fly to achieve those goals, but we’ll have to slow down, usually a lot. And those exact speeds, for best range and for best endurance, usually aren’t published for personal airplanes. A workaround is to simply use the lowest book power setting. If no limitations prevent it, best range or endurance usually is found at even lower power.

It’s important to be clear what our priority is. Speeds for best range or best endurance often are used interchangeably, preventing precision when we need it most. Make sure you’re using the correct chart. Being a little faster than the desired maximum-range speed usually doesn’t cost us too much, though. Flying a little faster when we’re going for greatest endurance is a bit more sinful, however, since we consume more fuel per unit of time if we’re faster than best endurance. In personal airplanes, the impact isn’t all that great, but heavier, faster airplanes with greater endurance, it can be a real issue.

But we still want to know what these speeds are in case we need them. The thing is, if we do need one of these speeds, we probably also have a completely different and more important problem on our hands. Digging out the POH and looking up the correct number to put in the airspeed indicator likely isn’t a good use of our time.

When trying to maximize the distance we fly for each unit of fuel, the main enemy is drag. A maximum efforts means minimizing or eliminating it. Of course, there are two kinds of drag: induced and parasitic.
Induced drag is a by-product of the lift generated when an airfoil moves through the air. Airfoil design and the amount of lift generated determine how much induced drag is created. Dragging stuff through the air—landing gear, antennas, door handles—creates parasitic drag. As with induced drag, we can limit the parasitic version by controlling how quickly we move through the air.

The graph above plots the induced and parasitic drag curves and their relationship to airspeed. A third curve results, representing total drag. The black dashed line finds the airspeed at which total drag is at its minimum. That’s our best-range speed, and for most purposes we can consider it to be the same as the airplane’s best power-off glide speed.
The graph below demonstrates an airplane’s best endurance speed is relatively slow, just above the point at which we enter the region of reversed command.

An airplane’s best range speed is the one covering the greatest distance for each pound (or gallon, or tank) of fuel. Although a running engine and its propeller can induce some variations, for all practical purposes a personal airplane’s best-range speed is its power-off best-glide speed at gross weight. Just as the best-glide speed will decrease with weight, it will decrease during a flight as fuel is burned.

On a long-range flight where a substantial portion of our takeoff weight is fuel, we’ll need to revise it downward as the flight progresses. A good rule of thumb is to calculate the percentage difference between the airplane’s gross weight and its current weight, then reduce the desired airspeed by the same percentage.

In essence, the trade-off is about time: We want to minimize how long we’re subjected to a headwind but maximize it when there’s a tailwind. The rule of thumb is to increase your best-range airspeed by 25 percent of the headwind component. Reduce it by the same 25 percent when flying with a tailwind, but never slow to less than the airplane’s best-glide speed for its weight.

If negotiating a head- or tailwind is about time spent traveling, the best endurance speed is all about time spent aloft: What speed (and power setting) should we fly to minimize fuel burn? The technical answer is to fly at the speed below which we’re in the region of reversed command. That’s the speed requiring the least power to remain aloft; any slower or faster requires a power increase.

Although published power settings frequently go as low as 45 percent power, that’s not the real answer to our dilemma. In fact, your airplane’s best endurance speed likely isn’t published. What to do?

One of the best ways to find your airplane’s real best-endurance speed is to do some flight testing to determine the lowest power setting at which you can maintain level flight. Note the airplane’s weight, and apply appropriate percentage-based corrections to correct for conditions over or under that weight.

When all else fails and you need to slow down and maximize your fuel, but you don’t know what speed to fly, use the airplane’s best power-off glide speed, adjusted for weight. Without better numbers or some flight testing, it likely will be close enough.