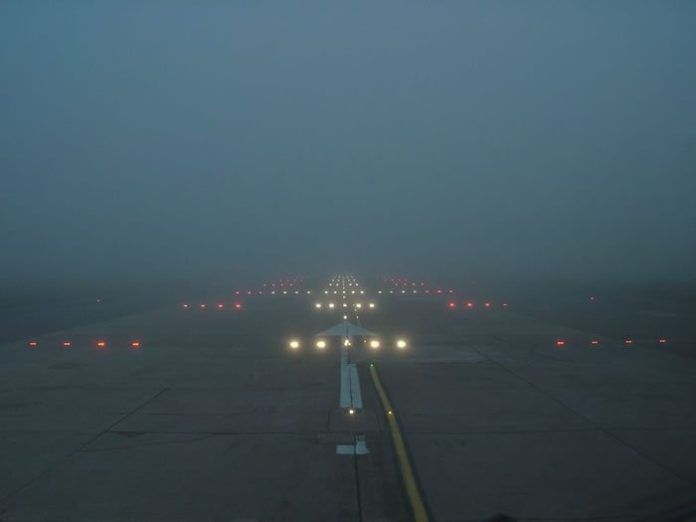 General aviation pilots make IFR takeoffs in reduced visibility and low ceilings on a daily basis. We line up, launch, establish a climb, transition to the gauges and press on with the flight. Assuming there is an approach with adequate minimums at home plate or a nearby airport, were confident we can return and land within about 10 minutes should something go sour. If were in a single and the engine decides to take the day off, our ability to pick out a good landing site is minimal but, hey, thats IFR flight any time the weather is down.

Where things get much more serious and the launch versus dont launch equation looms large is when the visibility gets well below the half-mile ILS minimum. Are we willing to take off in a GA bugsmasher when the vis is 1000 feet? 500? 300? The answer is an exercise in line drawing and judgment. Complicating the issue is that, like another risky endeavor, scud running, very few pilots receive training in actual conditions so the low-vis takeoff concept remains theoretical until suddenly having to confront it. I think most pilots make intelligent decisions when presented with facts and the risks are understood. By the same token, I think that when we pilots are simply told to not do something, were like teenagers and sex-were going to fall all over ourselves to try it as soon as possible, not always with great success. So, lets drag the subject of low-vis takeoffs out of the back alleys, into the open. Well talk about how to make them and making the decision to launch or wait until the weather improves.

Is This Trip Necessary?
Is it really necessary to go while the weather is down to where were going to be on the gauges on the takeoff roll? Potentially, yes. The weather may be forecast to get worse or we decide its safer to go now than try to fly in low IFR after dark. Nevertheless, I am reminded of a wise friend who told me that there is no such thing as an emergency takeoff.

Chances are if youve been around the block a few times, youve had to return and land because a problem developed during the early part of a flight. Nevertheless, the odds that youll have to return shortly after an IFR takeoff are low-each time Ive had to do it, I hadnt yet entered the clag. The level of confidence in our airplanes and their maintenance is a factor in any IFR departure-and a big one when an immediate return isnt possible. All of which should factor into your decision to make this takeoff.

Recent Practice
As we check off the matters to consider, one high on the list is whether weve practiced an ITO-instrument takeoff-under the hood from the moment of brake release in the last few weeks? If not, this should be a no-go. The accident data show that we pilots do things pretty darned well if weve practiced them recently. However, if weve never done it before or havent practiced recently, we pretty much suck. Whats worse, were also not very good at honestly evaluating how well we will do when we are about to do something we havent practiced in a while.

Each time Ive made a takeoff with visibility less than 1000 feet, the factor that let me say yes to the risk was that I had a pilot in the right seat who managed the rudders to keep the airplane on centerline. That allowed me to be on the gauges from before brake release so I didnt have to go through those critical seconds of adjustment to instrument references as the airplane was just leaving the ground.

No other pilot available? Your call. It means that youll need to line up perfectly on centerline when you may only be able to see a few stripes (on an FAA-standard instrument runway, theyre 120 feet long and 80 feet apart). Are you going to try to track the runway visually and then transition to the gauges on rotation or go head-down from the beginning of the takeoff roll? Each has risks and benefits-consider them and make a decision early so that you have time to run through the takeoff a few times in your head before you line up.

Gyros
On a vacuum pump, round-gauge airplane, youll need to bring the power up to get minimum suction so the heading indicator gyro is up to speed. (Have you checked how much it precesses during the takeoff roll, and in which direction?) Set it to the nearest 10 degrees and set the heading bug there as well, not on the heading youve been assigned after takeoff-tracking a heading when the bug is elsewhere can lead to confusion as to which way you should be going.

How wide is the runway? Are you confident you can stay on it if you decide to take off head-down? If you stay eyes-outside, how comfortable are you with an immediate transition to the gauges the moment you raise the nosewheel (and the airplane turns left as its rolling friction for directional control is lost)? If you stray from the runway, what is there to hit? Runway lights can do a lot of damage.

About one percent of aircraft accidents involve striking deer or other wildlife, and most of those happen in good VFR conditions. Theres no data on how many pilots see and avoid deer-you probably wont be able to on this takeoff-or how many deer see and avoid airplanes. Interestingly, about one percent of aircraft accidents are mid-airs, and youve probably spent good money on avionics to cut that risk-but youll make a zero-zero takeoff. Really?

Rolling
Initiate the takeoff by holding the brakes, going to full power and assuring the engine indications are where they should be before you let the airplane roll. You may wind up going down the runway at an angle to and saving 200 feet on the takeoff roll may mean not hitting a runway light, plus you dont want to divert your attention to set or confirm power while the airplane is rolling.

Plan for an abort. Are you confident you can keep the airplane on the runway as you accelerate to 60 knots (just over 100 feet per second), chop the throttle and apply maximum braking to a stop?
Plan on having to hold your heading within a degree or two-no overcorrecting on the rudder. When its time to raise the nosewheel (you may or may not want to tack on five knots above the book speed to get a clean liftoff), do so smoothly and positively. Establish normal climb attitude, confirm that the wings are level, youre holding the desired heading and that the airplane is indeed climbing.

The somatogravic illusion-your senses convincing you that youre climbing when youre actually flying level and accelerating-is incredibly powerful. It has caused a number of crashes on missed approaches where pilots were convinced they were climbing and flew level into obstructions. I was in the right seat of a Cessna 182RG on a low-ceiling, pre-dawn takeoff when the flying pilot started a slow descent at increasing speed just after he retracted the gear. When I called out the descent, he corrected and said hed been convinced we were climbing.

Crosswind
Low visibility in fog and mist usually means no crosswind. Thats not necessarily the case with rain or snow. Do you want to add a crosswind to the mix when keeping the airplane dead straight for a few thousand feet is critical?

It takes some time, especially in lower-powered airplanes, to get configured and stabilized in the climb. As the control forces are changing with speed and gear and flap retraction, continue to aggressively monitor the rate of climb, heading and pitch attitude. Then, once the airplane is at your desired climb speed and trimmed, dont mess with things until at least 1000 feet agl.

Conclusion
Part 91 low visibility takeoffs are legal, so pilots, being mission-oriented, are going to make them. In my opinion, the safest way to approach the subject is not to either blithely dismiss them as no big deal or flatly condemn them; its to talk openly about exactly whats involved and to practice them with an instructor so that a pilot can evaluate the risks honestly and make an informed decision before doing one for real.

Rick Durden holds an ATP with type ratings in the Douglas DC-3 and Cessna Citation 500 series, and is the author of The Thinking Pilots Flight Manual or, How to Survive Flying Little Airplanes and Have a Ball Doing It, Vol. I. Volume 2 is due out soon.