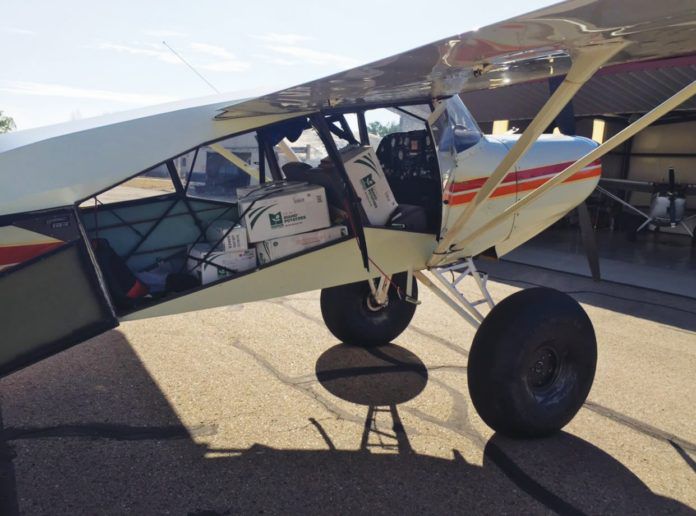 I often verbalize the last item on my preflight checklist just before taxiing onto an active runway and ask, aloud, “How could this flight kill me?” I run through all the Big Stuff in my mind, mentally ticking off each item that meets the criterion from an imaginary checklist. It’s similar to the FAA’s PAVE model— Pilot, Aircraft, environment and External pressures—but there’s also a factor that doesn’t quite fit the acronym: the payload. Call it PAVE-Load, or L’PAVE.

Payload, of course, is all the stuff you’re carrying besides fuel. In can include cargo, like the load depicted below, passengers—sometimes thought of as self-loading cargo—and their baggage. It also will include safety equipment, like a fire extinguisher, portable oxygen bottles, charts, radios, a survival kit, etc. Obviously, many of these items are things you may consider basic equipment for your type of flying and may actually enhance your survival if “something happens.” But we also need to consider how these items are loaded, how they’re secured and what can happen in turbulence, or if there’s a sudden stop. These and more factors are important when answering the question, “What is novel about this flight that could kill me?”

There are times when being a pilot or aircraft owner creates unusual opportunities, which in turn create unusual loads. When I had a Cessna 206, I was in the company of Part 135 haulers and other folks who put these cargo trucks-of-the-skies to the test with a crazy variety of unusual loads: a Harley-Davidson (some disassembly was required), a caged mountain lion, the gear box for a hydro-electric plant, cans of avgas, bottles of propane, 650 pounds of moose meat, etc.

Besides the obvious weight and balance considerations when fitting unusual cargo into a plane, the cargo must also fit securely and not be prone to shifting. If that box of potatoes falls off the top of the stack and slides to the back when you pull up the nose and lift off, you could easily create an aft CG at the worst possible time. While that flat box behind the pilot seat may make a great shelf for a camera, that unsecured four-pound Nikon would be a 40-pound projectile right behind the pilot’s head in a 10G deceleration.

Novel loads require some novel visualization of what might happen in every phase of flight. Items with wheels and slippery surfaces should be given extra consideration. Airtight packages may make a loud noise when they burst and potentially release liquids, fumes or potato chips at higher altitudes. Packages with liquids prone to freezing or congealing must also be very carefully managed. It may be unpleasant to think about, but you don’t need blood from a large moose or the day’s salmon catch congealing on the pulleys that guide cables to flight critical control surfaces. Shampoo from ruptured bottles isn’t any better.

When you have an unusual load, think about all the ways it could shift, and verify none of the permutations could interfere with either weight and balance or “controls free and correct.” Make sure you know what can happen when loaded items freeze or expand. And if you ever have a caged mountain lion, make sure the cage actually contains him or her should it wake up from an inadequate sedative and want to stretch.

Apart from rules and regulations, hauling hazardous material should make any pilot pause, which is a good time to apply some simple common sense and ask a few “what-if” questions. Consider the particular hazards associated with what you are putting in your plane. What could go wrong? What are the consequences if it does?

Consideration also should be given to the hazards of loading and unloading such cargo. For example, there are good reasons for separating firearms from ammo and having both in appropriate transportation packaging. A rifle that is leaned against a strut is also aimed at the wing tank, which usually is not a good idea. I have personally experienced uncomfortably strong fumes when the containers of hydrocarbon liquids I was carrying turned out to be poorly sealed.

Before taking off, take a moment to consider your passengers and their characteristics as well. They are sentient cargo prone to their own idiosyncratic behaviors. Not to be judgmental, but if the person is a pilot, you may need to make the lines of authority clear. They can be helpful in the right seat, as we all may have found from experience, but sometimes a fellow pilot may be more helpful in the back with their headset on isolate, or left behind at the departure airport.

Some passengers may have special needs that can affect how they are loaded and must be unloaded, particularly in an emergency. Entering a low-wing airplane, for example, may simply be beyond their physical abilities. What might happen if they have to egress in a hurry?

Large passengers or those with special gear like medical equipment need consideration with respect to their comfort and potential for interference with controls. For example, a tall passenger in a front seat easily may interfere with the rudder pedals, and anyone not thoroughly briefed on personal aircraft may think nothing of grabbing the steering wheel in front of them to gain leverage as they try to sit up straight.

My briefing to become an Angel Flight volunteer included specific training on the risks associated with special needs passengers and compassion medical flights. Not all passengers are equal in terms of how they fit into the risk profile. Much of the planning for carrying such passengers should be done before engine start, and it’s a good idea to simply pass through your preflight checklist the question, “What is different about these passengers that might kill me or them?”

Throughout most of North America, you can legally fly your aircraft with nothing aboard beyond what its manufacturer says is required minimum equipment. For the specific regulation, review FAR 91.205. Your pilot certificate, your medical certificate and enough fuel to get up in the air and back to the airport with legal reserves—that’s often all you’re required to carry.

You don’t need a fire extinguisher, for example, though it is an extremely good idea to have one. And you may not need to carry oxygen but, again, having it aboard gives you more options. For the details on minimum equipment, check your airplane’s documentation.

For added peace of mind, I often carry a maintenance kit with items like a spare tail wheel, a quart of oil, windshield cleaner, basic tools, etc., but I can remove those extras when pressed for payload. Others merely carry a live credit card to address similar concerns.

You can literally fly naked if you want. But apart from offering comfort, hygiene, and, hopefully, some aesthetics, clothes are your first level of safety equipment included in your payload. Sometimes what you wear matters very little, but generally you really should be wearing clothes that would provide comfort if you had to spend the night in the terrain you fly over. Or, at the very least, have them readily at hand.

Before departure, take a moment to evaluate that particular flight’s payload. Think about every aspect of the stuff piled in behind you and ask yourself, “What’s different from my normal payload?” How will the novelties of that particular flight affect the risk posed by what you’re carrying? The FAA’s formal risk management models, like PAVE, are great starting points, but passenger and cargo payloads deserve special consideration to ensure all risks are considered and managed.

My mechanic is a staunch Catholic. On our test flights, before I add full throttle, I can’t help but notice that he genuflects. It used to bother me. Does he not trust me as a pilot? Shouldn’t he be a bit more confident in his own work? Did I just get a faith-based annual? I have no idea, but I’ve learned not to judge because I have my own preflight rituals that include PAVELoad. Between the two of us, we have all bases covered.

Even though the list of acceptable items is long, there are limitations, and some materials, like fireworks and radioactive materials, remain prohibited. Transporting hazardous material aboard private aircraft is regulated by the U.S. Department of Transportation at 14 CFR 175.

For most of us, there are no rules requiring special equipment for flying over water, mountainous terrain or a desert. Pilots flying in Alaska or Canada must consider additional survival equipment, but when flying small airplanes in non-commercial operations over the Lower 48, you don’t have to worry about a violation if you’re not carrying some survival gear. Which is not the same as saying you shouldn’t worry.

Since I often fly over vacant terrain, roadless wilderness and jagged mountains, my safety/survival equipment tends to be a bit more extensive than folks in other parts of the country. But I find it ironic, as I add passengers and their cargo, that the margin in my useful load for extra “what if” survival supplies shrinks. In fact, when I fill the plane with passengers and gear for a business trip, I often have to strip the safety gear list down to bare minimums. I guess I need a bigger airplane. Or fewer passengers.

Choose your equipment trade-offs with care, and don’t let weight alone drive your choices. Don’t assume your default kit has everything you need for a particular trip. Ask the question each time: “Do I have the gear I need for this trip?” Give strong considerations to the weather you expect and terrain you will be flying over.