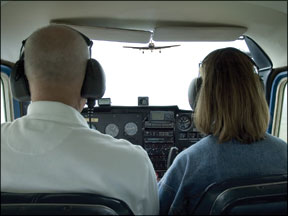 Few chapters in the great book of safe flying are as incomplete and misleading as guidance for avoiding mid-air collisions. In over 50 years of active flying, I have not yet seen any information accurately describing a workable method ensuring awareness and avoidance of mid-air collisions for the general aviation pilot. In fact, the FAAs well-meaning rules and guidance may be dysfunctional seeds of disaster, sown early in a pilots flying career, later leading to a mid-air collision.

Its actually a familiar story: Concepts based on intuitive

assumptions-instead of empirical knowledge-so often become concrete and immutable. The pilots ability to see and be seen is one of the most profound of all safety myths, and understanding why pilots are not always able to meet this obligation will help avoid complacency, motivating us all to compensate for deficiencies in the system. Lets get started.

First, we need to understand why any two pilots flying their aircraft at the same speed simply cannot meet their obligation to “see and avoid” the other. The flight environment they must scan includes an entire 180-degree hemisphere-from 90 degrees out to the sides, above and below-to directly ahead. But there are blind areas beneath the cabin floor, above its ceiling and behind the wings. Additionally, scanning for traffic usually is limited in practice to the area directly ahead, perhaps within a 60-degree visual cone. This is a habit weve learned from years of driving on relatively narrow, well-defined roads and through intersections where all relevant traffic is clearly visible, more or less dead ahead of us.

Slowing down so we can more easily see and avoid is the first corollary to this mid-air myth. Heres why: When two converging aircraft are flying at close to the same speed, the scanning angle-the visual area within which all potential collision targets are located-is at its largest. The larger this area, the more likely it is well fail to see and avoid the other aircraft. When this area is at its largest, i.e., when the two aircrafts speeds are identical or nearly so, the blind spots also are at their largest. The larger scanning and blind areas realized when both aircraft are flying at the same speed greatly increases the mid-air collision potential.

The idea here is that a higher speed ratio visually moves the collision target out in front of the faster airplane, eliminating or at least minimizing blind spots, and gives that faster airplane enhanced ability to visually acquire-and avoid-the slower one. If both airplanes are roughly co-speed, neither has the absolute ability to visually acquire, and subsequently avoid, the other. This is because of unavoidable blind spots above and below the cockpit and wings, and-through habit and practice-failure to look left and right a full 90 degrees for potential collision targets. But, you ask, if Im going so much faster, isnt there a greater probability that I wont see the target in time? No.

First of all, the slower target will be in your field of vision, not in one of your blind spots. Second, as you close on the target, at half the distance it will be four times as large in your windscreen; at one-third the distance the target will be nine times as large. The idea, of course, is to miss him. How much you miss him rarely matters, but having the ability to control the situation by having him in your “scan-demand” cone, thus affording easier visual acquisition, is all-important. The higher the relative speed, the narrower the scan-demand angle (visual cone) within which the target will be located, and the more frequently (and thoroughly) that field can be checked. Once acquired, only a small change of direction is required to miss him.

An environment with other aircraft flying the same speed as you is the most dangerous and difficult situation for visually acquiring and avoiding them. This primarily is because of the blind spots above and beneath your cockpit and wings, but also because of the very large scan-demand angle (the 180-degree forward hemisphere). You would be better off with a jet flying up from behind you at a three-to-one overtake speed, blind to you. You should be clearly visible to the jets crew, within a relatively small scan-demand cone of view, and with its crew having complete control of avoiding you. Co-speed traffic will not.

The Regs Dont Help I

Right about now, you should be thinking about FAR 91.117(a), which imposes a speed limit of 250 KIAS on aircraft flying below 10,000 feet msl. Generally, of course, this regulation affects jets and faster turboprops, reducing their speed to about the same as many piston-powered aircraft.

Why slow the jets to co-speed with the piston-pounders and impose the impossible scan-demand area on both the jet and the flivver? Yes, one reason the regulation exists is to allow pilots of both jets and pistons more time to see and avoid each other, but it also places the two closer together in terms of relative speed. And, as weve seen (the sidebar at left has more details), seeing and avoiding the other guy demands scanning a much larger piece of sky than if the faster aircraft stayed fast. Its pretty much the definition of an unintended consequence.

Fortunately, in most cases, the jet and the piston are working with ATC and separation is more or less assured. But what about the student pilot in the 100-knot Cessna? The bad news is he cant see the jet steaming up his rear. The good news is that the jets crew could see the Cessna. With a 3-to-1 speed ratio (300 knots, for example, versus 100 knots), the jets crew would spot him within a 39-degree visual cone out ahead of the jet, easily giving them the ability to see and avoid.

Meanwhile, the FAAs hemispheric altitude rule (FAR 91.159), which mandates all VFR aircraft flying in the same general direction fly at the same (even/odd+500 feet) altitude, is the second corollary of the myth of mid-air collisions. The FAAs statistics reveal that 82 percent of mid-airs result from one aircraft overtaking the other; 27 percent occur in cruise flight. If aircraft flying in the same direction were not flying at the same altitude, how would this affect future statistics?

The same statistics tell us most mid-airs occur within five miles of airports. Of course, such airspace often is populated by heavy flight training traffic, and either co-speed or close to co-speed aircraft. Forty-five percent of collisions occur in the traffic pattern. The airport will have a right or left pattern, probably determined by obstructions or noise abatement requirements, but the actual size of the pattern flown by individual aircraft may vary significantly. Failure to clear the extended final approach leg to look for aircraft flying a larger pattern than yours before starting your base-to-final turn gives adequate opportunity for co-speed, co-altitude aircraft to get into each others way. This is especially critical when you are flying a low-wing aircraft and the raised wing during base to final turn becomes a visual block to further clearing. Over one-third of all mid-air collisions occur on approach and landing when the pilots focus is locked onto the end of the runway, and the blind spots below and above the cockpit and wings are all but ignored.

In fact, the transient aircraft is in a much better position to see all the pattern traffic, especially those aircraft using the active runway, from a position outside the defined traffic pattern. Once accomplished, the arriving transient can make adjustments for inserting the aircraft into the traffic flow. Note, however, it is extremely important for the descending transient aircraft to make clearing turns adequate enough to eliminate the blind spots beneath and above the cockpit and wing. Of course, radio calls announcing position and intent are essential for both pattern traffic and transient traffic, but they dont eliminate blind spots, nor are they helpful when someone else isnt listening.

How To Avoid A Mid-Air

So, now that weve discussed some conventional wisdom regarding mid-air collisions, value of FAA regulations designed to prevent them and practices at non-towered airports, what are the “outside-the-box” steps we can take?

First, keep up your speed and fly fast, putting more airplanes out in front of your airplane and in your field of vision-or “scan-demand” area-giving you more control and opportunity for visual acquisition and avoidance.

Second, “sashay” a bit-develop what Ill call a clearing-weave habit. Everyone is taught to make clearing turns in pilot training, but this is one of the first things we forget as soon were out on our own. Only by making clearing turns can you clear for co-speed traffic above and below you. The resulting wing-wagging may also force sun glints off your aircraft, enabling other traffic to see you more easily.

When flying straight-and-level, any traffic posing a collision potential will remain fixed in your windshield. Initially, it will be no more than a dot in the distance. At night, the navigation lights of that airplane will also remain fixed, perhaps against city lights or stars. By maneuvering your airplane, that target will move back and forth in your field of view, making visual acquisition much easier. Likewise, your own airplane will be more visible to the target as it moves back and forth in its window. Continuously banking back and forth, and turning right and left, effectively enlarges your cockpit windows and allows you to see past obstructions.

What You Can Do

The most essential takeaway here is to know your best chance for collision avoidance in uncontrolled airspace populated by co-speed aircraft is maneuvering. Straight-and-level flight increases your chance of having a mid-air.

To “clear” the blind spots above and below your aircraft, especially during climb and descent, you need to bank in both directions, removing them. This is the basis for the time-honored “clearing turn” you and your instructor perform before doing airwork. In the real world, you dont know for certain the relative speeds of the traffic in your environment, which easily and frequently can include gliders, LSAs, helicopters and jets. Co-speed traffic guarantees major blind spots exist for both aircraft. The higher the speed ratio between them, the more control there exists for avoiding a mid-air-even if it resides only in the cockpit of a faster-moving jet.

Thankfully, there are two other myths associated with mid-airs: They happen all the time, and theyre always fatal. As the box at left details, thats not so. Still, just because something isnt as great a threat as we thought doesnt mean we should stop taking steps to avoid it. The threat of a mid-air collision is real, but there are well-known tactics available to us to minimize it. Just as with so much of our aviating, its a matter of minimizing risk.