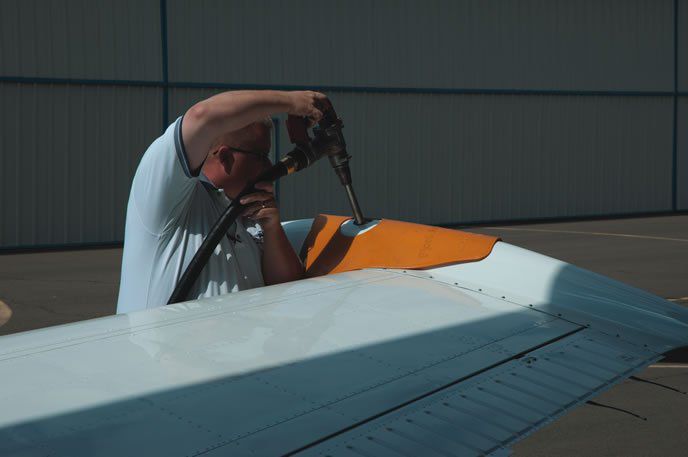 My first ride in a DC-3—way back in the cheap seats—could have been my last. It was the mid-1980s, and the old girl had been outfitted to demonstrate early moving-map technology. The tech was so early, in fact, that a DC-3 was needed to accommodate all the electronics that now fit into a smartphone. To make a long story short, a 30-minute demonstration ride became a lengthier weather- and fuel-related diversion. As the crew and passengers disembarked to stretch our legs before the last leg home, a fuel truck pulled up to add some much-appreciated dinosaur juice. It said “Jet A” on the side.

Yes, some DC-3s have been converted to turboprops burning Jet A fuel, but this wasn’t one of them. The crew handled the problem, and we took aboard enough aviation gasoline to get us back home. The rest of the journey was uneventful. At the time, an industry-wide focus on misfueling accidents—putting jet fuel into piston aircraft designed for aviation gasoline—was underway and the episode with the DC-3 was ample evidence more work was needed.

Part of the problem, of course, was the mindset that anything as big as a DC-3 needed the additional power available in “jet” fuel. Another part of the problem involved manufacturers who insisted on putting the word “turbo” on the side of their turbocharged airplanes, distinguishing them from other, slower ones on the ramp. From “turbo” to “turbine” isn’t a huge leap, and line personnel made the mistake of thinking jet fuel was appropriate. Even people who should have known better believed jet fuel was simply a higher-energy form of gasoline required by turbine engines.

An article appearing in the July/August 2005 issue of the FAA’s Aviation News magazine noted, “Incidents and accidents caused by the introduction of the wrong type of fuel on spark-ignition piston airplanes increased in frequency to alarming proportions by the mid-1980s in spite of intensive information campaigns and the widespread installation of color-coded fuel identification placards or decals on airplanes and ground refueling equipment.” In 1989, none other than “pilot’s pilot” Bob Hoover was in a misfueling accident.

And the problem persists. On February 22, 2015, a Canadian-registered Piper PA-46-350P Malibu Mirage lost engine power during initial climb from the Felts Field Airport (KSFF) in Spokane, Wash. Visual conditions prevailed. The airplane was destroyed during the attempted emergency landing after it struck railroad tracks; the solo pilot died two days later. According to the NTSB, first responders stated the fuel tanks ruptured during the accident sequence, and there was a strong smell of jet fuel present. An FBO’s fueling log at KSFF indicated the accident airplane had been serviced with 52 gallons of Jet A prior to takeoff.

Recognizing the dangers of misfueling and noting an industry program to install a color-coded placard “adjacent to aircraft fuel tank filler openings” and fuel hoses, FAA Advisory Circular (AC) 20-122A, “Anti-Misfueling Devices: Their Availability And Use,” was published in 1991. The AC also noted new adapter rings were available, “reducing the opening size from 3″ to 2.3″ in diameter. Jet or turbine engine fuel nozzle assemblies will be equipped with spouts with a minimum diameter of 2.6″, thereby reducing the probability of introducing jet or turbine engine fuel nozzles into the filler openings of aircraft requiring gasoline.”

The AC continued: “Owners and operators of reciprocating engine-powered aircraft should seriously consider equipping each fuel tank filler opening with these adapters since safety will be significantly enhanced, and in some cases, the cost is being defrayed by insurance companies.” Airworthiness Directives focused on Cessna, Piper and Gulfstream (Aero Commander) twins responded to the fact the three manufacturers each had otherwise identical models powered by either piston or turboprop engines.

Since avgas is approved for use—with limitations—in some turbine engines, the avgas nozzle is sized to allow it to fit into jet fuel tanks, but not the other way around. Industry imposed size and shape standards on fuel tank filler openings so a jet fuel nozzle could not fit into an avgas-only aircraft. Additionally and according to the NTSB, “Since Januarv 1, 1985, the reduced-diameter fuel ports have been incorporated on most newly manufactured airplanes as an integral part of the design.”

What’s much more likely is the wrong truck or pump gets used, adding jet fuel to an avgas tank. Since the tank likely already has avgas in it, everything turns the avgas grade’s color after a few minutes—blue for 100LL, green for plain old and very rare 100 octane and red for 80, if it’s still being manufactured. Looking at the fuel in a sampling cup alone may not tell the tale of what’s in your tank. The sidebar above details a couple of simple tests you can use to help determine if there’s jet fuel in your tanks, but the best way is prevention.

The rise of self-fueling facilities dispensing 100LL aviation gasoline has sharply reduced opportunities for misfueling with Jet A. But as the accident highlighted earlier demonstrates, the misfueling problem remains. Many airports now offer unleaded automotive fuel for those aircraft engines using it. And the advent of compression-ignition piston aircraft engines—diesels—means the line personnel servicing even a lowly Skyhawk may not know which fuel is required until reading the placard next to the filler opening. By then, thanks to human nature, it may be too late to stop a misfueling event.

Although few self-serve facilities offer both 100LL and Jet A at the same location, they do exist. Don’t taxi up to a self-serve pump “knowing” 100LL is the only self-serve fuel available. In any situation involving line personnel or multiple fuel types available at a facility, the smart thing to do is to stay with the aircraft, note which fuel truck pulls up and closely monitor the fueling process. When paying for fuel at an FBO desk, verify with the staff they pumped avgas. Check your receipt, too.

If you even suspect you’ve been misfueled, you’re justified in doing whatever it takes to ensure only the required fuel is in your tanks. That can include taking successive samples, conducting evaporation tests or draining the entire system and flushing it with what’s required. And even though Bob Hoover walked away from the accident after his misfueling event, remember: You ain’t Bob Hoover.