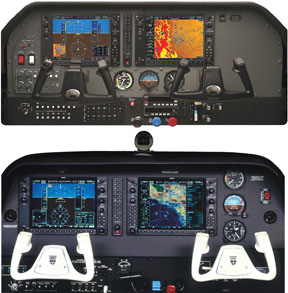 On the surface, the most recent trend towards glass panels and fully integrated GPS systems would appear to be a boon for general aviation. A way to stimulate demand, create work for manufacturers and installers alike, and allow GA pilots to fly with an unheard-of level of precision. There may be, however, a downside to these high-tech wonders: What will be the overall safety record of these new-generation cockpits on our general aviation fleets? How will they impact currency-in-type requirements? And, ultimately, might there be a whole new class of regulations that we have not seen before?

There is no question the new panels and avionics in the GA fleet have brought with them incredible improvements in both safety and situational awareness. There is, however, a darker side to these developments and their ultimate impact on a broad segment of general aviation, both economic and regulatory, has yet to be felt.

Back In The Old Days
Having about 5500 hours and being a CFI/MEI/ATP with four type ratings, Ive rented many airplanes over the years. They were generally equipped with two 360/720/760 Nav/Coms of variable vintages, a glideslope, marker beacon, ADF, transponder and sometimes a DME. A really cool airplane would have KNS-80 or basic Loran or non-integrated GPS.

In each case, whether it was a 150 or 152, a 172 or 182, we could jump into the airplane for the checkout, look at the radio stack and, as soon as we figured out where the equipment was, we could operate it successfully. All VOR heads worked the same way. Sure, some of them had automatic radial centering-remember that?-and others had their own quirks, but overall, they all worked the same. Same deal for the radios. Sure, some of them had different frequency changing techniques, some of them had the squelch on one side and volume on the other. Many of us remember the tragic consequences of that switch when a perfectly good airplane was flown into a mountain in Southern California by a CFI who, it is believed, turned down the volume thinking it was the squelch. Otherwise, all the radios of the time worked the same way-flying an ILS to minimums or shooting a VOR approach was a standard affair and not too much of an issue.

In addition, the occasional Loran or early GPS we might find was rarely coupled to a CDI, and even more rarely drove the autopilot-if the airplane even had an autopilot. If we were lucky enough to rent something like this, we were in tall cotton and simply had to find the GPS/NAV switches on them-so we could elect to disregard the Loran or GPS function and navigate by the trusty windshield washers to get from point A to point B. Even IFR flight or shooting an ILS to minimums could be handled…and with a great deal of confidence.

This had tremendous advantages for flight schools who were teaching and transitioning students, as well as for folks who just like to rent airplanes.If you knew how to work a King radio, the ARCs held no secrets for you. If you knew how to interpret an ARC VOR head, the Narco version was almost the same. Collins? A piece of cake.

The Brave New World
But those days are long gone. With the advent of glass cockpits and GPS, we have lost or are losing all of that advantage. Way back in the old days, the operational aspects of the navigation equipment installed in our airplanes were interchangeable. You could easily transition from one to another, but now, that is gone. Even the trusty external Nav/GPS switch is going away with certain integrated units. Someone who is proficient in a KLN-94 doesnt stand a chance in front of a Garmin 530. Know your Garmin 530 well? Lets see how you do with GNS-480. Proficient with the GNS-480? Fly that Garmin 1000 or the new Chelton and tell us how it goes. Would you shoot a GPS approach to minimums with a unit that you just learned? How about those new LPV approaches? Hmmm…lets see, the box I am flying is WAAS-enabled but is it legal for those? After a short while, one begins to see the problem.

Lets flash forward five years when you might be flying five different airplanes with five different GPS units, potentially driving five different moving map displays. Does anyone see a problem here? Imagine you have rented one of these beauties and find yourself in trouble and stressed out, but instead of doing what you have practiced on the checkout, you inadvertently revert to the first GPS you learned to fly. But wait, that may be exactly the wrong thing to do with the GPS you are flying today. There is no doubt that if the simple transposition of a volume control and squelch knob can be the cause of an aviation fatality, this too will someday be cited.

Dont get me wrong. I am not suggesting that we turn back the clock. There is no question that these navigation systems will enhance safety and situational awareness for those who fly them regularly. But as one whose initial experience with these automated navigation systems comprised about 50 hours in front of a KLN-94, the transition to a CNX-80/GNS480 has not been an easy one. It is sobering to consider the poor instructor or renter pilot trying to stay current, proficient and safe with four different GPS units, all of which operate in significantly different manners.

Enter The FAA
Back when manufacturers were first bringing these units to market, it is rumored that the FAA did not regulate the user interface designs in order to encourage competitive best practices. Whether thats true or not, we have seen some creative and innovative ways of operating equipment, as well as some new and resourceful ways of displaying data for pilots. What has also happened is that they are all different and that will become a safety and economic problem. The economics of flight schools not having interchangeable fleets for pilots to fly will increase the overall cost of flying. And, of course, these non-compatible systems represent a safety and legal challenge.

Speaking of which, lets explore the legalities here. As a legally qualified 182 pilot, you could jump into a 182 with the nice new glass cockpit and you are good to go. There is no training required by regulation, thank you very much. But the very next day, you could hop into a 182 with some other brand (perhaps a CNX-80/GNS480 and MX-20, or a KLN94 and an 550 MFD) and again, still be perfectly legal. How different can these be from that Garmin? Perhaps it will fall to the insurance companies or to the schools that rent aircraft, but for what minimum competency are we going to ask so that everyone has a minimum acceptable performance level in the new glass age? Do we need FAA regulation? When the inevitable does happen, you can be sure the FAA will be here to help.

The Pilots Responsibility
What can we in general aviation do in the meantime to avoid such a tragedy from ever occurring? Since the FAA left it to the manufacturers to come up with the user interface designs, the manufacturers are the only ones that can fix what I think will be a growing problem. In response, each of these devices should be equipped with an emergency mode. Once the pilot enters that emergency mode, all defined functions should work and respond exactly the same way.

A lot of thought would have to go into what should be included in such an emergency mode, but here is a simple example: A pilot gets lost above a cloud layer but for some reason has difficulty either interpreting or inputting to their GPS systems. Do we really want them trying to read the manual? How about an emergency function that would allow a pilot to enter direct to mode-executed exactly the same way on every unit and with the identical outputs. Outside of this emergency mode, the units could continue to preserve their unique competitive advantages. But when it comes to safety, we should all be on the same level playing field.

In the meantime, renters and others who fly same-model aircraft with different panels will have to maintain a higher level of currency. They may be flying a GPS/moving map display that operates just differently enough from the one they really know to shatter that nice new glass cockpit into a thousand pieces.

-Phil Blank is an ATP/CFII/MEI currently flying a TR182 based in Livermore, Calif. 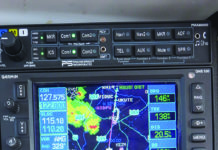