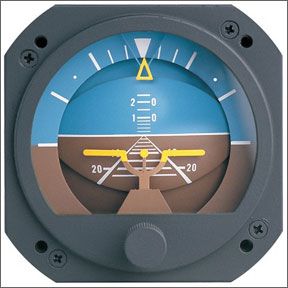 Anyone planning to do for-real, piston-airplane IFR work also needs to plan for the inevitable gyro instrument failure. As too many accidents have shown, depending on your rusty partial panel skills to get you home aint gonna cut it for much more than descending through a thin overcast. For most of us flying behind air- or vacuum-powered gyros, that means at least a backup pump of some kind or an

Those lucky enough to have glass panels in a certified (i.e., non-LSA) airplane probably already have some kind of backup. It could be an electric AI, or an instrument powered by the airplanes essential bus, something well explore in a moment. And it needs to be in your main scan, not on the other side of the panel, as is often the case with backup instruments in piston aircraft. To accurately assess whether you need a backup instrument, you need to know what powers your primary gyros, the likelihood of that system failing and decide whether existing backup instrumentation, if any, is both up to the task and in a location designed to maximize the ease with which you can transition to it in for-real situations.

Gyros in the typical piston-engine airplane comprising todays fleet is still powered by a mechanical pump, whether vacuum or pressure. When gyros in personal airplanes became mainstream, the so-called “wet” vacuum pump-engine-driven and plumbed into the powerplants lubrication system-provided power. Wet pumps are about as reliable as any other engine accessory, perhaps more so. Their drawbacks include the need for an air-oil separator in most installations, the extra hoses and connections required to run engine oil to them, and the slight risk all that plumbing can spring a leak, dumping overboard your engines oil.

Another drawback is they mix a small amount of oil with their exhaust, making them unsuitable for pressure-driven gyros. This also prevents using them to provide the air to inflate pneumatic deicing boots.

Enter the “dry” vacuum/pressure pump-also engine-driven-in which the rotating pump vanes use graphite for lubrication. Originally designed as a one-pump-fits-all solution to the wet pumps air/oil exhaust issue, the dry pumps main benefit is the ability to provide either vacuum or pressure, depending on how its plumbed. It also can provide the air needed by deicing boots.

The problem with dry pumps, however, only became apparent after they were in service for a while: They fail much more frequently than wet pumps. And when they fail, its not immediately obvious to the pilot unless he or she is actively monitoring the system gauge (or the airplane has an alerting system). The lack of an alerting system has caused more than one instrument pilot to follow a dead or dying gyro into the ground. In fact, the chief dry pump manufacturer at the time, Parker Hannifins Airborne Division, in June 2001 assembled a mailing to instrument-rated pilots warning them of potential dry vacuum pump failures. In 2002, the company discontinued manufacturing dry vacuum pumps and today notes any installed dry pumps are now past their mandatory six-year replacement interval.

There are two basic ways to back up a vacuum/pressure system. One is to install a secondary electric or engine-driven pump to power the system in event of the primarys failure. Another is to use the engines own vacuum-manifold pressure-to turn the gyros.

Of the two, a secondary pump is preferable. Thats because the manifold pressure-based system depends on the difference between ambient air pressure and what the engine can create. Its produced by reducing engine power to create a nominal reduction of five inches of manifold pressure from ambient. Using the one inch per thousand feet of altitude manifold pressure rule of thumb, one can quickly see a scenario where the power available must be reduced to keep the gyros turning. If this happens during a high-altitude flight, you have a Hobsons choice: Reduce power to near idle and descend a few thousand feet until ambient pressure rises, or ignore the gyros and fly needle-ball-airspeed. The former is a bad plan when over high terrain; the latter unreasonable when IMC.

But the secondary pump has a drawback, also: The pump itself is not the only vacuum or pressure system failure mode. Regulators, filters, lines and even the instruments themselves can fail, rendering a secondary pump so much extra weight. If its the instrument that fails, all the backup pumps in the world wont help.

The all-electric glass panels installed in many contemporary airplanes dont automatically come from Garmin, Avidyne, etc., with a backup. Instead, installing such a secondary system is up to the airframer and-while specific details such as placement differ from manufacturer to manufacturer-the basic answer in each case is to install a set of independently powered essential instruments.

On the opposite page, weve reproduced the vacuum system schematic for an early (read “steam-gauge”) Cirrus SR20. A model of redundancy, this system still has “choke points” where a component failure can render inoperative the entire system. Later, all-glass SR20s do away entirely with vacuum systems, relying instead on electrical power for primary and secondary attitude reference. Instead of everything depending on a single battery, alternator and bus, Cirrus installed a second battery and an essential bus to power the primary flight display (PFD). Many SR20 installations also include a second alternator.

Still, the non-SRV (a model intended for VFR-only operations) all-electric SR20s include a set of secondary flight instruments, in the bolster directly beneath the PFD. In the early, steam-gauge aircraft, these instruments consisted of an electric-powered attitude indicator, an airspeed indicator and an altimeter. In the later, all-glass aircraft, they still do.

We long ago came up with a belt and suspenders solution to the problem of ensuring redundant attitude reference in our steam-gauge airplane. Our first line of defense is a wet vacuum pump, which should last at least as long as the engine. Weve never had an issue with it, or the instruments it powers. Our second line of defense is an electric attitude indicator. Its mounted to the left of the standard six-pack flight instruments, where something called an ADF indicator (remember those?) used to reside.

Our third line of defense is the virtual instrument panel on a portable Garmin GPS navigator. The device can be made to display the basic flight instruments-including altitude, heading, speed (groundspeed, of course) and attitude-data for which is derived internally from the GPS signal. Its a nice piece of kit, and several pilots whose opinion we respect have reported its a relatively easy transition. While they wouldnt want to shoot an ILS down to minimums with it, theyd be happy using it to get to VMC conditions and a precautionary landing.

Sister publication Aviation Consumer recently looked at the market for electric-powered standby attitude indicators and concluded two new entrants were definitely up to the task. They included the Sigma Tek 5000EG, the basic design of which involves taking an air-driven AI and converting it to electric power. In this case, that means mounting an electric rotor, along with the wiring and electronics to make it run. The unit came with a slip/skid indicator-an inclinometer-making it a legal turn-coordinator/turn-and-bank substitute per Advisory Circular AC 91-75. Meanwhile, the Mid-Continent 4300, according to the magazine, “is clearly the better product of the two.” Its only real drawback is a base list price of $3950, without battery, at least when compared to the Sigma Tek at $2850. Meanwhile, street prices for the Kelly Instruments/R.C. Allen line of electric AIs are well under $2000, and Castleberrys 300-14EL is only a few hundred more.

The good news is pilots have a choice in the market for backing up their gyros. That wasnt the case, say, 10 years ago. Considering the importance of electric AIs to instrument pilots flying “hard” IFR in light airplanes, thats a good thing.