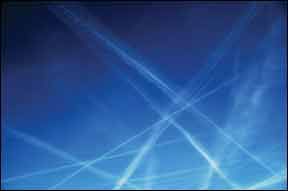 Twice in a lifetime is two times too many; two times when the operator of a moving machine stared a hole right through me and rendered me invisible. In both cases perfect conditions prevailed—nothing obstructed the view, yet our machines converged at a good clip. My first experience came at the hands of the driver of a 1977 Cadillac. My solution was to lay down a vintage motorcycle. It wasn’t my preferred choice, but obstacle and traffic conflicts made lateral maneuvering unwise. The second time came courtesy of two pilots in a Skyhawk during a VFR arrival to a non-towered airport in Florida’s panhandle.

In both events, my vehicle should have been easily seen by the other person, but wasn’t. The Skyhawk pilots later confessed they heard my multiple position reports on the CTAF but neither saw me. It wasn’t that they weren’t looking. We’ve all been there: We know there’s traffic, but we can’t visually acquire it, even in good conditions. It turns out  we’re using a rather poor tool.

Collisions vs. NMACs
First, let’s acknowledge mid-air collisions occur rarely. But they do happen, and when they do, aircraft occupants fair poorly. According to NASA’s Aviation Safety Reporting Service (ASRS), midair collisions in the U.S. have averaged 30 per year since 1978. While general aviation aircraft dominate the stats, no type of operation enjoys immunity from the potential for a serious airborne conflict.

In the 12-month period ending in August 2011, ASRS took in more than 4000 in-flight traffic conflicts reports. Of those, 235 met ASRS criteria for a near-midair collision (NMAC) of coming within 500 feet. Almost half the NMACs involved air carrier, corporate or air taxi flights.

Technological advances such as the traffic collision avoidance system (TCAS) serve to enhance the potential resolution before airborne conflicts become critical. But even with these new tools, as ASRS CallBack #380 shows, “see and avoid” remains a crucial aspect of collision avoidance in visual conditions. Of note were the instances in which aircraft with collision-avoidance gear endured a too-close-for-comfort encounter, which can occur from antenna blanking or the lack of a functioning transponder.

Relatively few collisions or NMACs occur en route; most occur where all of us spend regular time—the airport pattern and its environs. Here’s what the NTSB found in a recent study.

• Most aircraft involved in mid-air collisions are flying recreationally and not on any type of flight plan.

• Most mid-air collisions occur on weekends and in visual meteorological conditions (VMC);

• The vast majority of mid-airs happen at or near non-towered airports and at altitudes below 1000 feet agl;

• Pilots of all experience levels fly into mid-air collisions—from veterans with 20,000 hours or more to student pilots on their first solo flight;

• In a significant 37 percent of mid-airs studied, a flight instructor was aboard the aircraft;

• Most collisions occur in daylight with visibility greater than three miles.

Limitations
The experience-is-no-protection aspect of the NTSB study points out an important reality: limitations of our primary collision-avoidance equipment, our Mk. I, Mod. 1 eyeball. In fact, our eyes and how we use them work against us in several ways.

First, the farther away an object is, the less clearly we see it. Second, its size, shape and relative movement collectively influence our ability to detect an object. Third, our ability to see the object is influenced by how bright it is—how much light it reflects. Lastly, the contrast between the background and the object we try to see influences our ability to pick it out from the clutter. For example, a white airplane against a gray sky of high humidity can be tough to spot; impossible if the sun angle lights up the haze and blots out all detail in the process. You can be, effectively, in IMC on a day that otherwise qualifies as VMC.

With all that going on, it’s a wonder the numbers aren’t worse. But those statistics tell us a couple of things. One of them is humans have limitations when it comes to spotting other airborne traffic. Evolution simply hasn’t caught up—yet—with the concept of flying humans and the limitations our physiology imposes when we engage in such an unnatural activity.

At the same time, we’re not using what we’ve got. Admit it: You’ve flown for several minutes at a time on a clear day without scanning for traffic. And how we scan for traffic is just as important as how often. Thankfully, we can overcome many of our shortcomings and bad habits.

Aviators in the military, Navy service people and others who stand watch for threats are taught from the start to avoid fixating on a spot. About 20 seconds after focusing on a particular point, other objects—even those with significant relative motion—start to disappear from our vision; sometimes instantly, other times gradually.

Either way, objects just fade away outside our central point of focus. It’s called motion-induced blindness, and is an exacerbated version of what’s called Troxler’s Effect (see the sidebar on page 6).  And the distance between the stimulus and the point on which we fix our stare can render invisible even objects with significant relative motion.

That’s how a pilot can stare out the windshield of the cockpit, looking intently for a moving object out on the horizon—and miss it completely by pausing to concentrate on one small region of the field of view.

Worse, as the length of the stare or fixated gaze increases, the less likely we are to cure the problem with just the small, involuntary eye movements we all make. This occurs because the image has become sort of burnt into the retina. So the burned image remains in our mind until the view changes dramatically, allowing the imprinted image to begin to fade.

Thankfully, as researcher Michael Bach learned, blinking, shifting our eyes to new focal points, moving our heads in the process, all tend to return those missing objects to our field of view. Bach, a German neurobiophysics professor and ophthalmologist, developed imagery designed to induce MIB, examples of which are in the sidebar at left.

Smart Scanning
Accepting for the moment that seldom can we see behind our airplanes—and that threats rarely come from behind—the visual scanning techniques here are geared to using as much as possible of our horizontal and vertical fields of view. Remember one thing up front: continually “keeping your head on a swivel” works against your ability to detect traffic because head movement blurs vision. Blurred vision is far less likely to pick out conflicting traffic that the brain recognizes. Thus, a constantly moving scan is practically useless.

What’s useful? Glad you asked. Here’s what the FAA recommends; it follows what deck watches learned to practice at sea.

First, divide your view field into blocks of approximately 10 to 15 degrees. With about a 210-degree field of view, that’s a dozen to 15 blocks. Second, examine each block individually, employing your own system or pattern—making sure your system or pattern covers the whole field of view. Third, pause to let your eyes really look at that block, then move on to the next block. Repeat: move, pause, look…move, pause, look….

Which patterns work best? It depends, so you develop what works for you—what you’ll most diligently practice. Some pilots prefer to start far left or far right and work their way across to the opposite side and then reverse. Others—myself among them—prefer to start in the middle and then look at a segment to the left, then back to the right segment adjacent to center—and spread the scan from the center outward before moving back to the center. This method enables you to detect any movement in a single block. It takes only a few seconds to focus on a single block and detect conflicting traffic.

Try to avoid staring at a single point out the window, lest you stop scanning as you’d like and have that motion-induced blindness afflict you. Of course, while scanning for traffic, don’t neglect to scan the panel; my preference is to return to the panel after every third of a scan.

Anti-Collision Assistants
Consider engaging any and all passengers in a game of “look for traffic,” with rules a little like the license-plate game families play on long vacation trips. Offer a bonus prize for any passenger who beats you in spotting traffic. Most of us, however, fly solo but we can still have an extra set of eyes working for us, thanks to VFR flight following services from ATC or, of course, filing an IFR flight plan.

In fact, general aviation flying offers no better deal than VFR flight following: You get traffic alerts and separation suggestions while remaining free to make a new decision. To receive it, call up the nearest ATC facility, ask for “VFR flight following” and supply some basic information: Aircraft type, position, altitude and destination, at a minimum.

Flight following is provided on a workload-permitting basis, so if the ATC facility can handle you, you’ll likely get “into the system.” You’ll know you’re in for sure when the controller calls back with a transponder squawk and an admonition to “…maintain VFR at all times and advise of any altitude changes.” Of course, don’t waste the controller’s time or tax the person’s patience by jumping in unprepared.

Be ready to give the controller all the salient info you’d have filed on the ground—all of it. You can find it on most kneeboards and the flight plan forms at FBOs, as well as on-line. Check the sidebar on page 5 for some additional details on using VFR flight following.

Remember: the ultimate goal is to avoid things that go “bump” in the air.

Tips and Tricks
Remember also that time of day can be an issue when trying to spot traffic. Twilight hours at dawn and dusk can make seeing difficult for pilots flying toward the sun—particularly on a hazy, smoggy day. Our in-flight vision suffers from glare, lighting, windshield distortion, oxygen supply, cabin temperature, aircraft design, acceleration forces and more.

If at dawn or dusk, consider strapping on the O2: Using supplemental oxygen—especially at night and even when just a few thousand feet above sea level—dramatically improves our eyes’ low-light sensitivity and our ability to discern colors.

Force yourself to actually pause in those scan zones, and not just slow down. You need that pause to give your eyes time required for accommodation or refocusing of objects both distant and near.

Dave Higdon is a professional aviation writer/photographer with several thousand hours of flight time, some of which was actually spent looking for traffic.