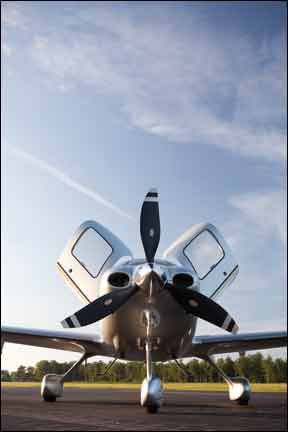 Not a winter goes by without someone sending me an e-mail that includes the sentence, “You aren’t really suggesting I don’t fly my airplane in IMC in the winter?” It’s usually from the pilot of a very capable piston single or light twin that is not certificated for flight in icing conditions; often the pilot includes something like, “I live in the Great Lakes and we get icing a large part of the year.”

Sometimes I get a similar question about passenger and baggage loads. “The engineers at [insert airplane manufacturer name here] wouldn’t have designed the airplane with six seats if it couldn’t carry six adults, or at least four adults and two kids. Do you really mean I can’t fill the seats and the fuel tanks?” A current trend is questions about synthetic vision systems in glass cockpit panels or cutting-edge heads-up displays. “With an essentially VFR depiction of the runway, I can make a zero-zero takeoff and even a zero-zero landing ‘if I have to’, can’t I?”

The Problem
Ummm…no. Well, to answer more fully, you probably can, but maybe only once. You might not get a second chance.

A lot of authors fill a lot of column-inches and Web pages with detailed explanations of how to fly IMC in potentially icy clouds with little or no ice protection. Much instructional time and chat line space is devoted to techniques for managing fuel and baggage load to operate at the very edge of the weight and balance envelope, sometimes with a wink and a nod toward flying “a little outside” the approved limits. The ability to land with synthetic vision systems regardless of cloud ceilings or visibility is one of the hottest topics of discussion on the aviation chat lines.

And yet as someone who reads and considers every general aviation accident report that comes across the FAA and NTSB Web sites, I’ve come to a very unpopular conclusion: When asked, “Do you mean I can’t fly IMC in the winter, or with the seats and the fuel tanks filled, or to a landing below minimums even if the runway is right there in front of me on the synthetic vision system?” my answer is…yes, that’s what I mean.

Why is this such an unpopular stance, even backed with two decades of studying mishaps and thinking about ways to avoid them? Because like all cultures, our society of pilots has developed its own set of stories and myths. One of the most pervasive of all among general aviation pilots, especially those who fly Part 91 operations for recreation, personal travel or business, is what I call The Myth of Utility.

Origins
The Myth of Utility states that the expense and upkeep of an airplane is justified because we can do so many things with it, and it improves the quality of our life or the success of our business. It’s popular in myths to develop a short, detailed and often quite improbable “origin story” that explains how a frankly absurd character or situation is acceptable and even “normal.” Like Superman’s destroyed home planet Krypton and our dense yellow sun, or Spiderman’s bite from a radioactive spider, there is an origin story to our mythic belief that general aviation airplanes have something called “utility.” When as pilots we buy into this myth, we’re setting ourselves up for asking more from the airplane than it is able to deliver.

I believe there are three distinct components to the myth of aviation’s utility: aircraft and instructional sales, personal economics, and pilot ego. Let’s take a look at each.

Sales
Each airplane manufacturer may have entered the business out of a love of airplanes and the people who fly them, but the firms that survive are those that quickly learn they have to do whatever it takes to keep selling airplanes. It’s a cutthroat market out there. A very small percentage of potential airplane owners can afford to buy an airplane purely for recreational use. Most need to have “justification” for such an expensive combination of acquisition and ongoing support and operational costs.

That justification usually comes in the form of either “take the family to Grandma’s,” “look at the range of weekend recreational opportunities the airplane opens for you and your family,” or “add to your business’ bottom line and serve your customers better than the competition by flying your own airplane while they’re stuck on the highway below.” Corollaries to these marketing tag lines include emotional appeals like “live the [insert airplane manufacturer’s name here] lifestyle,” “visit three customers in a single day” and “be home from the business trip in time for the Little League game.” This utility argument isn’t made solely by the manufacturers and sellers of airplanes. It’s also central to the presentations of flight instructors and others who promote the business of learning to fly.

Sales staffs and airplane modifiers give us visions of increased utility without showing the trade-offs permitting its use. For example, even when one manufacturer’s airplanes were suffering industry-leading fatal accident rates, mostly in adverse weather, it heavily promoted its product with the marketing line, “Life without delays or cancellations.” This was an appeal to the airline business traveler who might prefer to travel by personal airplane, but it was also proclaiming—at least subconsciously—that its products could be flown at the pilot’s whim regardless of the weather. Ironically, most airline delays and cancellations are because of weather.

Manufacturers must sell airplanes in order to keep our industry alive. Instructors, FBOs and aviation promoters have to make flying as attractive and useful as possible to justify the required investments in time and money. We all need the factories to sell new airplanes to help support the aircraft already in the fleet.

In any economy, but especially over the last 15 to 30 years, aircraft marketers must be creative and aggressive to move units out the factory door. The major strategy for almost all in the industry has been to promote the “utility” of personal aviation. But it’s up to us and “buyer beware” to read between the lines and, more importantly, read the Pilot’s Operating Handbook to determine how much of that utility is usable under what circumstances. It’s our job to determine which compromises we must make in payload to get range and performance, for instance, or in range and performance in order to get the greatest payload capability.

Economics
By economics, I mean the financial aspects of buying, owning and operating an airplane as they impact a family’s budget or a company’s bottom line. Some economic concepts are beneficial in a real sense—bonus depreciation, for one. Others, however, are less objective.

This probably isn’t the first time you’ve heard any of the marketing phrases discussed above to whet your desires to own an airplane. Be honest—if you own an airplane now, you probably used at least one of these approaches with your family or the chief financial officer to justify the expense. But you probably felt just a little bit dirty in doing so, too.

And yet we use the arguments to substantiate the costs. Our chosen airplane can do it all. We load up World War II-era light taildraggers and modern LSAs with miniature glass-cockpit displays that give them more cross-country navigation and weather capability than the Delta Air Lines DC-9 I rode to Atlanta last month. We spend huge sums of money to get just a little additional weight-carrying capability (gross weight increase STCs seem to run anywhere from $15,000 to $20,000 for each additional 100 pounds’ increase) instead of homework with the weight-and-balance charts. We expect every airplane to be able to fit every mission—it must, to justify the expense to ourselves, our family or our accountant. And that assumption often gets a pilot—and his or her passengers, and sometimes even people on the ground—killed.

Ego
Lastly, we want “bragging rights” to say our airplane can do it all, whether “all” means the combination of load-hauling and short-field work, or a fast, low-wing airplane used for pipeline patrol (which screams out for a high wing and a low cruising speed), or a serious IFR airplane that also does aerobatics (which conflicts with stability design goals). We buy the high-performance retractable-gear airplane or a light twin when our typical flight is more in Cessna 172 or Light Sport territory. We take airplanes that aren’t certificated for ice into icing conditions. We want to fly aerobatics but don’t fly an aerobatic airplane.

Several times I instructed the owner of an extremely well-equipped light twin who only flew outside the immediate airport area when I’d come to town for his recurrent training. Although it didn’t make sense to me, he wanted to fly a twin. Hey, he could afford it, and he put in the time needed to stay current—who am I to say it was wrong? It’s a benign example, however, of what can lead to a very risky attitude if taken to other extremes: flying an airplane that doesn’t meet the mission.

Pick Your Utility
If you’ve read this far, you’re probably a little angry at me for “turning traitor” and exposing flaws in the justifications of owning and flying an airplane. Yet I’m a huge fan of getting the most out of general aviation airplanes, and I travel by personal aircraft whenever I possibly can. I do so by picking “the” utility I need for the specific flight.

The myth of utility becomes a bad thing if you think the airplane can achieve all its maximum capabilities on a single flight. Any given airplane presents a wide range of capabilities. For any given flight, we must choose which utility we value most and make the sacrifices necessary in other areas in order to achieve the goal. For instance, using the short runway at a fly-in resort means landing and taking off at the lowest possible weight…even if that means you can’t fly there or back nonstop, or you have to ship your suitcases ahead instead of bringing them along in your airplane. I can have payload, or I can have range…but I can’t have both on the same flight. I can have personal-airplane scheduling flexibility, but only if I remain clear of weather that’s outside my airplane’s envelope.

Everything has trade-offs. No airplane will do it all. For a much greater chance of a long, safe lifetime of flying, strictly observe the airplane’s limitations—they, not the marketing hype or your personal desires, define what the airplane can do. In other words, fly the airplane you’re flying…not the airplane you wish it to be.