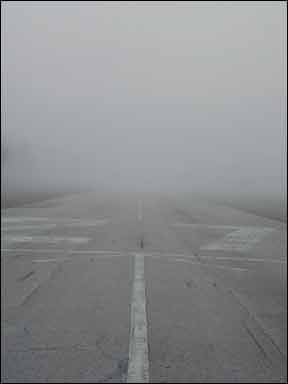 If you’re accustomed to flying “real” weather, you’ll eventually be confronted with the question of whether to make a takeoff in zero-zero conditions. When you can’t see the other end of the runway, you probably can’t get back in if something happens. And even if you can see it, the overcast might still be too low to allow a successful approach.

The natural reaction might be to stretch out in the FBO’s lounge until the fog burns off, or not even bother going to the airport in the first place. And those are good choices. The zero-zero takeoff isn’t something to approach lightly, but the risk it presents can be managed. Here’s how.

Planning
The first thing to consider when confronted with a zero-zero take off is the old saying, “Is this trip necessary?” Put another way, would delaying or modifying your plans eliminate the risks imposed by the takeoff? If so, you have your answer, along with a new plan. If not—and we’d gently suggest few things this side of being shot at dictate a zero-zero takeoff—you have some more planning to do before taking the active.

Start with the runway environment itself. The photo above hides it well, but the runway in question isn’t all that long or wide. It’s more than adequate in good VFR, of course, but wouldn’t be our first choice for even a low IFR departure. For one thing, there are obstacles at both ends. For another, there’s no approach allowing you to get back in if something happens, even if the ceiling was high enough.

The other problem here is determining a go/no-go point for the takeoff roll, the one at which we’ll abort the attempt if we’re not airborne. On runways like this one, we might want to step it off and determine where that point is. On other runways, we may have taxiways, distance-remaining markers or other clues for when we’ve need to abort.

But our planning doesn’t end there. What if something “bad” happens? What will you do? Where will you go? To us, this really is the crux of the matter when considering a zero-zero takeoff—if we can’t get back in after launching, what’s the plan?

The “bad” stuff can be pretty much anything, including a mechanical. But most often, it’s something simpler, like an unsecured door, or maybe we left behind some needed charts or luggage. Regardless, we’ve taken off in zero-zero conditions only to discover we need to be back on the ground quickly.

Hopefully, there’s a nearby ILS—and the airport is reporting at least 200 and a half mile—if the low IFR is widespread. Or, maybe the topography means your runway is the only one socked in for miles around and every other runway in the immediate area is clear and a million. Either way, you need to learn what your nearby options are before taking the active and have in mind a firm plan with which we can resolve the situation.

Configuration
How we configure the airplane for the zero-zero takeoff is at least as important as how we actually execute it. This is where we need to spend some extra time during the planning phase to determine if our climb capability exceeds the terrain’s slope, that our runway performance is adequate, and that we’re prepared to fly and comply with any published obstacle-clearance procedures.

Necessarily, a lot of this begins in the planning stages, in our POH’s performance section. While you’re there, take a long look at the runway performance charts, for the required runway length. If we’re doing this right—more in a moment—we’re not doing a maximum-performance takeoff. As such, we’re going to use more runway than we might otherwise need. At the same time, we’ll want to lengthen any portion of the runway we’ll use to decelerate and stop in case we abort the takeoff attempt. Why?

We’ll use more runway because we can’t see it all at once. As we’ll discuss in a moment, we want to smoothly apply power, not run it up before releasing the brakes and performing a short-field takeoff as the book might want. At the same time, any abort also will be a more leisurely affair since maintaining directional control can get a bit dicey with maximum braking in most of the airplanes we fly.

Configuration issues also extend to the question of whether to use flaps for the takeoff. On many airplanes, it’s not an issue: A normal takeoff, even on dry pavement, uses a notch of flaps. In others, it’s optional. When it’s up to the pilot to decide on whether or not flaps should be deployed, the thing in which we’re most interested is the airplane’s pitch attitude at liftoff and ensuring it is correct for the operation. To us in this instance, we want to get as much air beneath us as possible in as little time as possible. A happy coincidence is by lifting off as soon as possible—consistent with our stringent need to maintain directional control—we’ll be putting as much distance between us and any obstacles as quickly as we can. Using a notch of flaps can help.

That said, a zero-zero takeoff isn’t a good time to play test pilot. If your airplane doesn’t require flaps for a normal takeoff, think very carefully before you extend them for this takeoff. If you have some experience using flaps on takeoff with an airplane in which it’s not a normal procedure, that’s one thing. You know what the airplane will do and how it will behave with takeoff flaps. If you don’t have any experience with flaps, leave ’em stowed. This isn’t a good time to be doing something in the airplane with which you’re not extremely familiar.

Regardless of how you answer the flap/no-flap question, you’ll definitely want to pay attention to how you set the pitch trim. The personal airplanes we fly usually have a takeoff pitch trim position we set during the pre-takeoff checklist. Putting the trim control in that position does an excellent job of anticipating the airplane’s desired pitch and the resulting forces for a normal, gross-weight takeoff. But we may or may not be executing a gross-weight takeoff. And we’re surely not doing a normal one.

As such, we’d opt to set the pitch trim slightly nose-up. Why? To ensure we establish and maintain a positive rate of climb. Yes, the airplane might want to fly a bit earlier than usual. Yes, we’ll probably need to exert some nose-down pressure on the pitch control to maintain the desired airspeed during liftoff and initial climb. We even may need to force the airplane to remain on the runway a bit longer than it wants to ensure we have adequate airspeed. Tough.

We’d much rather need to push the nose down a bit than pull it up during a zero-zero takeoff. To us, anyway, it’s easier to push than pull. Plus, the likely outcome of failing to counter a slightly nose-up trim condition—a slower airspeed—is a lot less critical than the opposite condition, failing to gain altitude while accelerating.

Finally comes the question of when to raise the gear, if any, and the flaps we may have deployed once a positive climb rate is firmly established. One answer depends on the type of weather we’re dealing with. If our zero-zero runway got that way because of a low, thin fog layer, we’ll likely wait until we’ve climbed out of it into the clear before changing the configuration. If, however, the IMC we’re departing into is a few thousand feet thick, we’ll retract gear and flaps in their proper sequence—flaps first, usually—once the positive climb rate is established.

Execution
All the preparation won’t matter much if we can’t execute on the takeoff itself. For the zero-zero takeoff, we’re basically on the gauges as soon as we begin adding full takeoff power. How we track the runway centerline and how cleanly we fly off it determines how well our zero-zero takeoff attempt goes.

One of the most critical things on a zero-zero takeoff is maintaining directional control. You’ll likely have some reference to the runway edges—lights, striping—and that’s an important visual cue our peripheral vision supplies. But it’s supplementary. We also may be able to use the runway centerline for some of the takeoff roll to help us maintain alignment. But we can’t count on it since once we raise the nose we’ll likely obscure the centerline striping. We really need to be focused inside the airplane on the heading indicator and other instruments, just as if we already were at altitude. In other words, we need to initiate our instrument scan as we add full power on the takeoff roll.

And when we add power, the absolute worst thing we can do is cram it all in and wait for the airplane to accelerate to flying speed. Singles, especially, but most twins, also, will want to head toward one side of the runway or the other. Singles built in the U.S. of course, will want to veer left as torque and propeller wash exert their forces. Right rudder is the usual cure, but this phenomenon also seems to catch even experienced pilots unawares. By the time an appropriate correction is applied, the airplane is either well left of the centerline or trending right of it, with too much correction. Given we have limited visual cues during a zero-zero takeoff, this isn’t good. Happily, there’s a cure: slow, steady application of power as we maintain directional control and until full throttle is attained. Done properly, the nosewheel/tailwheel will remain on the centerline and we’ll have full power shortly before we need to lift off.

The key here is juggling the need to keep the airplane straight and on the centerline as we bring up takeoff power. In a typical single, we’ll start with some right rudder and smoothly, gradually increase power while watching the heading indicator for drift. Glancing out the windscreen once or twice to verify the visual cues are depicting what we want is appropriate but very soon we’ll need to be fully on the gauges—especially the heading indicator—as our primary method of maintaining directional control. Any heading drift must be instantly corrected, especially on narrow runways. This is where the rubber meets the road on a zero-zero-takeoff.

Once full power is applied, it becomes a matter of continuing to maintain directional control solely by reference to the heading indicator while scanning the remaining instruments to ensure a smooth, easy transition to instrument flight. As we reach liftoff speed, smooth back pressure should be applied and a positive climb rate established. Clean up the airplane, if necessary, and perform the initial climb per your clearance.

It’s hard to overemphasize the risks a zero-zero takeoff imposes. Thankfully, it’s not something we have to do every day. But it is something we can—and should—practice regularly. Grab a safety pilot or CFI-I and try it. You’ll quickly find smooth power application and a fine touch on the rudder during the takeoff roll are mandatory.