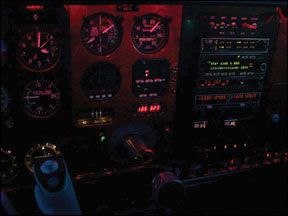 Night flying can be just as safe as flying in the daytime-but it isnt. Although accidents are more likely to occur during the daytime, according to the AOPA Air Safety Foundations 2007 Nall Report, accidents at night (and in IMC, for that matter) are more likely to be fatal. “Only 19.2 percent of daytime accidents resulted in fatalities, but over one-third (34.6 percent) of all night accidents were fatal.” Meanwhile, the same report states, “At night, nearly half of the accidents in VMC conditions were fatal (45.0 percent), compared to nearly

Night-flying accidents are generally thought of as being caused by inexperience-by students, or low-time pilots-but nighttime offers an equal opportunity for embarrassment, or worse. Experienced airmen are involved, too. Like landings or lazy-eights, night flying is a skill that needs to be practiced to establish and maintain pilot proficiency. At night, most of the visual aids to which weve grown accustomed will vanish. Landscape features disappear. The airport boundaries are blurred by the lights of a nearby town, or brightly lighted sports events. Instead of having perspective and sharp outlines, the eye is tricked by illusions-the narrow runway can seem longer, a wide field looks shorter. But before we get into those factors of night flying, lets start at the beginning, with flight planning, and consider what extra steps we should think about for flying at night.

Of course, the airplane doesnt know what time it is, or whether the sun has set. Nevertheless, we need to ensure it is ready for our night flight by checking to make sure. The main thing we need to check is lighting, both internal and external. The navigation lights are first, since its not legal to operate without them at night. If the airplane is a rental, it should have at least one working landing light to be legal. Practically, of course, we want all the landing lights we can get. In the cockpit, we need to ensure the instrument panel lighting works, and that we know how to control it. Oh, and make sure theres at least one flashlight aboard.

Before all that, however, we should sit down with our charts and other information to ensure the airports and facilities we need at night are available. One of the best sources of information on night lighting for aviation is a current sectional chart. The sectional chart is the best night flight planning chart to indicate surface lighting. You can easily select a nighttime cross-country route, which includes lighted fields. It doesnt have every detail, but all of the main and important items are there.

As you plot your proposed route of flight, a star above an airport symbol shows a rotating beacon. If there is an “L” in the airport information box, here is some kind of field lighting on all night. Just knowing these things-a beacon and field lighting-can be vital, if an unplanned emergency develops in flight. A sudden loss of oil pressure, unforeseen bad winds, or weather, engine or electrical failure may require an immediate landing at the nearest airport.

Certainly, you can punch the emergency button on the GPS and youll have all the data on nearby airfields, plus how to get there. That is, of course, if electrical power is available and you arent flying in heavy precipitation or snow. Do you have those navigational aids in your airplane?

With the sectional chart, a lighted field can be selected in a couple of minutes. If the airport is illuminated only part of the night, the (L) symbol is used. If lights are provided, only when the airport has been given prior notice, the symbol *L is shown on the chart. Too, when landmarks are covered by darkness, rotating beacons are very good visible check points along the way.

Basic flight planning should be familiar to all pilots who make cross-country flights. For a night flight, however, there are a few important points needing special consideration:

First, the pre-flight weather briefing. Carefully check the temperature/dewpoint spread. It can be a powerful warning telling you that visibility may soon drop, once these numbers merge to within a few degrees of each other.

You always should monitor weather conditions by radio. While airborne, weather can change. Unforecast weather is a big danger on a long night cross-country flight. At all times, be ready to divert to an alternate airport. The winds aloft forecast (which also can be updated by radio while youre en route) is a very significant piece of weather information. Meanwhile, low ceilings can increase the chances for midair collisions, since VFR traffic will be compressed into a narrow band of airspace. For night VFR, if there is marginal weather of any kind, you need to be alert for the existence of a second weather factor. For example: scattered rain may reduce visibility or be accompanied by low clouds. The best call is to delay the flight until conditions improve, or divert to a nearby airport with good weather until the bad stuff passes, or the next morning when you can see.

You should choose higher altitudes than you normally would. Picking a higher altitude than normal for your route or airplane gives you more options, presuming the weather doesnt interfere, but the winds can be considerably stronger than when lower. A shift in winds can seriously eat into planned fuel reserves, reducing the range of your airplane. (Heres another reason to update your weather information while airborne.) Conversely, flying close to the ground, due perhaps to a low ceiling, can give the pilot a distorted perspective of his landmarks. You also can also be below the VOR-reception range, which wont help navigation much. Once you have given up safe altitude and maneuvering room between you and the ground, a vital safety reserve is lost.

Got gas? Of course, the dangers of getting into a low-fuel situation greatly increase at night. You may have planned for a lighted airport for your destination landing, but without enough fuel to get there, possibly due to stronger than-anticipated winds, it wont be within reach. There are not many smaller airports open after dark-particularly in winter-for refueling aircraft, so you should plan accordingly.

If an in-flight fuel diversion becomes necessary, you should know where the large all-night airports are located. If you make careful estimates, with plenty of reserve fuel (considering a current winds aloft forecast) this should keep you on the safe side.

As with everything in aviation, there is another side, too. Day or night, fronts are still fronts. When you have stable and strong winds they can result in low-level wind shear. Another problem: Wake turbulence tends to hang around longer in calm air.

If you let your night flying skills remain unused, you can be sure your traffic patterns and landings wont please you. If you think you may be rusty-you are. Get together with your flight instructor and polish up your night flight skills.

Night flying has many good aspects. The winds are usually light and the air is calm. There is much less thermal activity. Some of your landings will turn out perfectly. If it is a really dark night, for some pilots, an attitude instrument go-around can bring on a large stress condition. Get some practice first, with a skilled certificated flight instructor.

Navigating VFR at night by pilotage can be much easier than during the day, presuming visibility is good. As noted earlier, the yellow shapes on the sectional matches the cities and towns, but there are some optical illusions out there. The sidebar on page 5 highlights some of the more common ones.

At night, the VFR pilot needs a good foundation in using the flight instruments for backup and confirmation of what he or she is seeing out the windscreen. Sometimes an uneven ridge line you are using for a horizon can be a problem, until you recheck your instrument panel. Stars that blend with ground lights need a recheck against your instrument readings, too. Haze or fog can cover up lights in one area and not another, complicating your visual navigation.

Of course, night flying occurs at, well, night, when we humans normally are resting. Instead, though, were out drilling holes or trying to get home after a long day. One result is fatigue, which seems to be involved with a high number of night-flying accidents. The FAA says fatigue is “…a depletion of body energy reserves leading to a below-par performance,” and thats a pretty good description. When fatigued, a pilot tends to believe that all of his cockpit duties are being accomplished without any problem. But, unknown to the pilot, it takes longer to get things done.

Coordination also may be affected, as some operations may be out of sequence. Peripheral vision begins to fade, which narrows the field of view. The pilot may think that external forces are causing control handling problems, when actually they have been caused by his slower, or incorrect reactions.

All pilots need to guard against drowsiness and fatigue; if you are careless, a potential threat to your safety is very close. At night, fatigue threats to pilot safety are very dangerous. The monotonous sound of the engine, the warm, heated cockpit, and the natural tendency to sleep at night-can all add up to falling asleep at the controls. If you are flying alone, and for long hours, you are vulnerable.

It is very important to begin the night flight in a healthy, well-rested condition. Safe practice includes another pilot, who can carry on a conversation without falling asleep himself. Its a good idea to make plenty of ATC or weather communications, set up a periodic instrument scanning of flight and engine instruments. If possible, do some in-place “stretch aerobics.” Activity (both mental and physical) is the way to overcome solitude and boredom.

It would be a mistake to think night flying is inherently dangerous, regardless of who flies in it. A properly qualified pilot, who understands the techniques needed, and knows how to control the airplane by reference to the flight instruments, seldom has problems. But there are special problems requiring a pilot to do things differently than he or she might during the day.

You are, after all, operating in a dark, hostile environment, even if the aircraft doesnt know whether it is flying during the day or night.