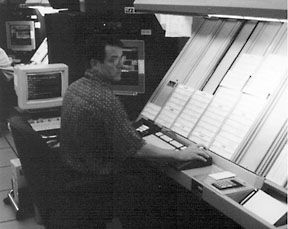 Listening to ATC is a favorite diversion for my wife as we approach our destination, particularly when the weather is ugly. The chatter between pilots and controllers can be comforting, giving an eavesdropping passenger the impression that were all professionals quietly going about our routine missions.

But whats truly routine to a pilot can startle a passenger unfamiliar with the finer points of IFR flying. I recall the look of horror on my wifes face the first time she heard the phrase radar contact lost when I was cleared for an approach while we were bouncing around inside some turbulent gray clouds.

Like many, she had the impression that we couldnt land without radar coverage, as if controllers were magically guiding the airplane toward the unseen runway. Call it radar myopia.

In truth, many pilots suffer their own version of this misunderstanding when the radar vectors to final they may be expecting suddenly dont materialize. It happens from time to time. And as more GPS approaches are designed for outlying airports, expect it to happen more often. In general, basic instrument training doesnt address this issue thoroughly, if at all.

The Radar Good Life
If you peruse the AIM or the controllers manual (FAA 7110.65) carefully, youll see the phrase except when in radar contact salted throughout. Thats a carryover from the days when radar coverage was limited and the standard means of separating traffic was with paper strips and pencils, based on position reports from pilots. Obviously, things have changed.

All things considered, having radar is better than not having it. Many facilities have low-altitude alerts, which wouldnt otherwise be available without radar and ATC can issue missed approach instructions different from the published procedure, which is often simpler and faster than the charted missed. Under radar coverage, the extra pair of eyes is helpful in traffic and terrain avoidance, particularly if youre in a high-density terminal area.

Finally, radar vectors save time and can limit exposure to nasty weather. When being vectored, a request to deviate is usually accommodated. Thats not an option when flying a published procedure.

Nowadays, radar is so all-encompassing that its the standard method of IFR separation and non-radar is the exception. But its an exception thats more widespread than many pilots realize.

At many outlying airports, radar coverage may be some distance away, either laterally or vertically. ATC considers such airports non-radar fields and will handle traffic into them accordingly.

That often means one in, one out for arrivals and departures and no radar vectors to final, with approach clearances that include the requirement to pass over an initial approach fix, sometimes including a procedure turn. The kicker is that ATC wont necessarily know the finer points of what the rules require a pilot to do and its not unusual for a controller to issue a clearance that bends those rules. The classic example of that is clearing an aircraft to skip a procedure turn when, in fact, one is actually required.

Furthermore, even when youre in radar contact, a controller, for operational reasons, may still elect to handle you non-radar and he or she wont necessarily say as much. But if youre listening carefully, ATC will tell you when radar is in use. In the terminal area, its the phrase expect radar vectors. While enroute or after departure, the phrase is radar contact. If radar is available, the use of the phrase is rarely overlooked.

You can also request to be handled non-radar. If, for whatever operational reasons, you dont want vectors, ask the controller to approve the full approach. That implies that youll be expected to fly to an IAF and complete the approach as charted.

Enroute, Approach
Non-radar rules apply to both enroute and approach operations, although enroute radar coverage tends to be more all-encompassing because cruise altitudes are higher. Nonetheless, if you hear the phrase radar contact lost while enroute – talking to a center or an approach control – technically, youre supposed to resume standard non-radar position reporting. (See the sidebar and AIM 5-3-2.)

As the AIM explains, position reporting is always required, except when ATC has informed the pilot that hes in radar contact. In other words, in the AIMs somewhat antiquated view of things, non-radar reporting is standard, radar is the option. The reality, of course, is just the opposite.

If you encounter non-radar, its more likely to happen in the approach environment, where you might hear either radar service terminated or radar contact lost. According to the AIM, position reporting is supposed to resume if the pilot hears either phrase but the reporting requirements are slightly different for each. In the real world, neither pilots nor controllers seem to pay much attention to this rule, however.

The key phrase to listen for when youre preparing for an approach is expect radar vectors, followed by the approach of choice. If you dont hear it, it means (a) the controller forgot to say it – not impossible – or (b) he truly intends to clear you via non-radar procedures. If theres any doubt, merely ask: Can I expect radar vectors?

Non-Radar Rules
There are some basic rules of non-radar IFR. Here they are:

• Youre considered a non-radar arrival if ATC doesnt vector you to final.
• If you arent vectored, youll have to fly a published feeder route and/or complete a published procedure turn from over an IAF.
• Non-radar approach clearances always include altitude crossing restrictions.
• If an approach has multiple feeder routes and IAFs and none is specified by ATC, fly the route/IAF combination youre closest to.
• If a DME arc is specified in the clearance, youre expected to join the arc at an IAF, not just anywhere along the arc.

Real World Examples
Lets apply these basic rules to some representative approaches, starting with the LOC/DME for 28L at Monterey, California. Monterey is a full-up radar airport, with its own tracon even. When the tracon closes, Oakland Center still provides CENRAP radar coverage so the chances of operating entirely non-radar are remote. Nonetheless, the approach is designed with that in mind.

Approaching from the east, from WIGGL, no procedure turn is required or allowed, unless authorized by ATC. For pilots arriving from the north, the 143-degree radial from the Salinas VOR is the feeder route, ending at CHRLE, the only other IAF. Obviously, arriving from Salinas requires a course reversal, which is done via a holding pattern in lieu of procedure turn. Your choice on the entry method.

Notice that neither clearance said anything about a procedure turn, although one version of the approach requires it, the other doesnt. Youre expected to know which is which. The same applies to the altitude youre supposed to fly after youve met the crossing restriction; these appear on the feeder route segments and in the profile view.

You might get lucky and get a clue if the controller amends the clearance with report procedure turn inbound. But ATC isnt required to do that; its optional. In both cases, youre expected to report leaving the final approach fix inbound; thats a standard non-radar reporting requirement, as explained in the sidebar.

Back east, at Atlantic City, New Jersey, a new GPS approach – designed to the standard T-configuration – adds a new-age twist to the non-radar equation. Two IAFs grace this procedure and theres a feeder route from an airways fix called PANZE. (Not shown on the graphic.)

Here, an aircraft arriving from anywhere north of HOLDU would enter the approach there and intercept the final approach course without any course reversal required. Coming from the south, youd fly direct to JENGA, then straight in.

This is the type of new non-radar procedure youre more likely to encounter as GPS makes further inroads into the IFR system. The fundamental rules are the same on this GPS approach but there are more opportunities to fly it straight-in, with no course reversals. Further, the GPS receiver is designed with that straight-in philosophy in mind.

Last, a DME arc. The one depicted here is the ILS DME to runway 11 at Grand Junction, Colorado. Pilots arriving from the north, over mountainous terrain, have no choice but to go to the Grand Junction VOR when not in radar contact. From there, at 9000 feet, you fly the JNC 275-degree radial to intersect the 14-mile DME arc, which is flown until intercepting the localizer.

Arriving from the south, you might be cleared direct to the only other IAF, the JNC 232-degree radial and 14-mile DME arc. On the FAA/NACO version of this chart, the R-232 could easily be mistaken for a feeder route to the IAF but it is not. Unlike the R-275, it has no altitude and/or course information so the IAF for that entire segment starts at the VOR and feeds into the arc.

This type of approach is a sticky gray area for both ATC and pilots. For example, approaching from the west, it might make sense to enter the arc at a point closer to where it intercepts the localizer. But as mentioned earlier, by FAA mandate, the arc can only be entered at an IAF. The controller isnt supposed to amend that but, in the real world, it happens. If the controller can legally vector you into the arc – that is, his minimum vectoring altitude allows that – theres no particular hazard, even if it isnt precisely legal.

Wrap Up
For any IFR pilot competent to fly a radial, hold headings and nail altitudes, executing a non-radar approach should be little different than receiving standard radar vectors to final. The trap is not realizing until well into the procedure that youre actually being handled non-radar rather than being vectored.

In place of radar vectors, just fly to various fixes and execute a course reversal as necessary, which is no different from cruise navigation, except that the distances between fixes or intersections are smaller. A non-radar approach should be a non-event if the few basic rules described here are understood.

If you know what ATC phraseology to listen for and you stay sharp on the reporting requirements from your end, non-radar is a piece of cake.

Jeff Schweitzer is owner of a Malibu Mirage and editor of the Malibu/Mirage Owners Association magazine.