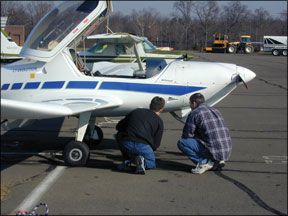 Just let me know if theres anything I can do” is a common request of the non-rated passengers Ive carried aloft from time to time. Usually, we dont even get to that point; the idea of going up in a personal aircraft is sufficiently foreign to most non-pilots they cant even conceive of helping minimize the workload. They also dont understand theyre contributing to it. Passengers unfamiliar with the concept often are a necessary evil of flying personal aircraft. Having been both the PIC and

the pax over the years, Ive seen the phenomenon from both sides. Most of the time, some patience, understanding and smooth flying on a good-weather day is all the pilot needs to assure a pleasant experience for the pax and a safe flight.

Its rare when an out-of-the-box “civilian” passenger can actually help lighten the workload and, sometimes, of course, things can get downright interesting (see the sidebar on the opposite page). Some passengers are content to read a book and listen to their iPod; others are genuinely intrigued by what youre doing and how you do it. Since Im extremely comfortable with single-pilot IFR over long legs, the former is my favorite passenger. The latter type, however, can help with the workload and make the flight safer and more enjoyable for everyone. The latter type of passenger, of course, is the kind our industry/community needs to encourage, not sideline.

There are ways to use non-pilot passengers to your advantage and ensure they never endanger the flights safety. One of the keys is the hours logged by the passenger; another is the amount of time you have to train them outside the cockpit.

Having an extra set or two of eyeballs in the airplane is always a good thing, even if what a passenger might consider dangerously conflicting traffic is of no concern. But, if you wait to brief your passengers on how to spot traffic until ATC calls something co-altitude at twelve oclock and less than a mile, youve waited way too long. The same thing is true with respect to things like instrument indications and the inevitable, “What town is that down there?”

I try to brief passengers to keep an eye peeled for other aircraft, especially in the en route environment. Although Im usually talking to ATC either on an IFR flight plan or by obtaining flight following services, I can always use a little bit of help. Part of that is to gently suggest the fact of another aircraft nearby isnt an emergency; its not necessary to shout over the intercom. Instead, a softly spoken “Traffic above and to the right,” or a gentle tap on the shoulder followed by pointing at what theyve spotted, is ideal.

Hanging onto and ensuring the correct chart is always available has great value, also. The more engaged the passenger, the greater is the likelihood he or she will be able to follow the flights progress with a visual chart. Even so, your helping orient themselves to the chart and the airplanes position-which is constantly changing, of course-is a prerequisite.

Other, basic tasks you might assign to a non-pilot passenger depend on the cockpit configuration. For example, if the engine instruments are way on the other side from you, but in front of the right-seater, suggesting they keep an eye on things to ensure the oil pressure and ammeter gauges stay in the green arc is a no-brainer.

Finally, and while engaging passengers to help ensure the flights safe and productive outcome is a worthy goal, we also need to prevent them from doing “something stupid.” Examples might include using a throttle lever or yoke to help reposition their seat. Stretching their legs to the extent a rudder pedal is moved also makes that cut. I always suggest leaning against a door is bad idea, too, along with opening a window in flight or fiddling with a door latch. Oh, and placing something magnetic-like the aforementioned iPod-close to the magnetic compass isnt a good idea either, although doing so pales in comparison to, say, reaching over and pulling the red knob all the way back.

Where it gets interesting, however, is when the passenger genuinely wants to learn which control does what, how to manipulate them and when. Not only is providing patient, detailed answers to these questions a good idea from a safety standpoint, approaching them correctly can eventually mean adding a new certificated pilot to your circle of friends. At some point, of course, we cross an imaginary line between information and flight instruction, but were not there yet.

Ideally, we would have started with the basics during the preflight inspection by demonstrating how the control surfaces move relative to the yoke or control stick. As you conduct that demonstration, be sure to link the controls deflection to how the airplane will react. The preflight walk-around is also a good time to point out items like pitot tube covers, static ports and other items you may have installed to secure the airplane the last time you flew. Ive lost track of the number of times a passenger pointed out a wheel chock, for example.

Once everything is loaded and were comfortably strapped in, passengers can provide a lot more basic help with things like organizing the cockpit, configuring headsets and watching for pedestrians and other aircraft on the ramp. Having them read off checklist items is another way both to enhance safety by ensuring you dont miss anything and keeping them engaged. Once the engine is running, its time to ask them to monitor engine gauges.

Helping you navigate starts on the ramp, by pulling out an airport taxi chart, if one is available, pointing out the ramp youre on, the runway youll be using and taxiways connecting them. If youre at a big-city airport with complicated taxi instructions, an extra set of brain cells never hurts.

If youre lucky and the non-pilot passenger has been trained, he or she can handle communications for you. This can quickly get complicated, of course, but many regular passengers do it with aplomb. Ensuring the passenger knows where the microphone switches and buttons are and is comfortable using the radio can come in handy in emergencies, obviously.

Before taking the runway, spend a couple of extra moments going over the takeoff, initial climb and routing you expect. This is a good time to emphasize youll be a bit busier than normal, especially if departing into IMC, until reaching your cruising altitude. Since I typically handle these and other chores myself, I try to gently suggest my workload will be pretty high, that I really need to hear ATC more than them and that noises from landing gear retraction and changing prop pitch are normal. The same thing is true at the flights other end, of course, with flaps added to the mix.

In most personal airplanes, theres not that much a non-pilot passenger can do to help beyond helping with communications, navigation and spotting traffic. But a little more training in how to fly can reap some significant benefits. Ideally, youd start with the concept of maintaining straight and level flight. One way to approach this is to transition someone from driving a car to flying an airplane: Theres another dimension to consider. So, add that dimension while minimizing the other by putting you or the autopilot in charge of maintaining altitude while the passenger worries about heading. Just like in your primary training, pick a prominent point on the horizon and get the passenger to keep the airplane headed toward it.

Later, reverse the roles: Put yourself or the autopilot in charge of heading and get the passenger to maintain altitude. Eventually, he or she will put it all together and-like walking and chewing gum at the same time-be able to hold heading and altitude within acceptable limits. Obviously, you probably wont get your passenger to this skill level on one flight. When you do, though, you get to take a nap. Not really…

Short of enrolling him or her at the local flight school, the only remaining hurdle to ensuring your passenger can land. By now, he or she should be familiar with the engine controls and what they do, along with how and when to deploy the flaps and landing gear, as appropriate. But the idea of flying close to the ground is off-putting to many non-pilots, so getting them comfortable with a potential emergency landing takes work.

My favorite training method is to find a quiet, rural airport. Have the passenger fly the pattern, but make only low passes at a safe airspeed. Start adding flaps and gear, emphasizing the low-speed handling changes and a minimal landing checklist. After a few sessions, your passenger will be good enough to land in such a manner the airplane can be used again. And thats what its all about.