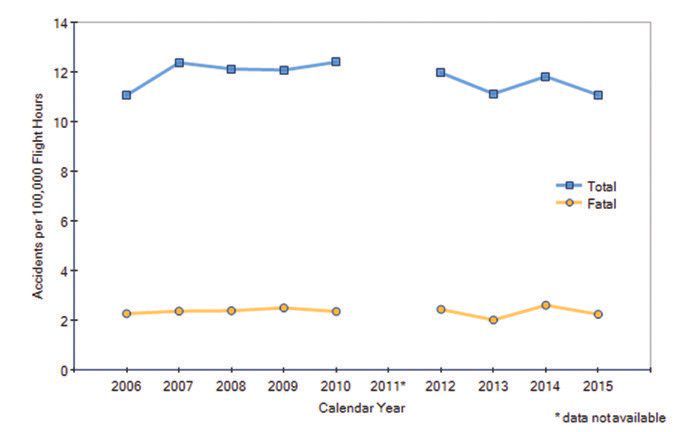 At about 1709 Eastern time, the airplanes collided at the intersection of two runways. The Cessna 150, which was taking off, was destroyed; the private pilot and passenger aboard it sustained fatal injuries. The CitationJet was landing. The airline transport pilot and the four passengers aboard it were not injured. The CitationJet sustained substantial damage. Visual conditions prevailed.

The airplane collided with terrain at 0953 Eastern time following an in-flight breakup shortly after takeoff. The airline transport pilot and private pilot were fatally injured; the airplane was destroyed. Visual conditions prevailed. The flight, which departed at 0927, was the private pilot’s commercial pilot practical test.

After maneuvering away from the airport, the Piper returned and executed a touch-and-go landing. Radar data indicate the airplane climbed to 900 feet msl at 80 knots of groundspeed before radar contact was lost. Witnesses observed the airplane flying normally, then saw the left wing separate from the fuselage, which impacted a field. Preliminary examination revealed the left wing main spar exhibited cracks from metal fatigue extending through more than 80 percent of the lower spar cap, and portions of the forward and aft spar web doublers. The right wing also exhibited fatigue cracks in the lower spar cap at the same hole location extending up to 0.047-inch deep. The 2007 airplane had accumulated 7690 flight hours since new. Weather at 0953 included wind from 260 degrees at seven knots, 10 statute miles of visibility and few clouds at 25,000 feet.

At 1229 Mountain time, the Piper struck the Diamond’s tail during taxi. Neither the student pilot and flight instructor aboard the Piper nor the flight instructor and pilot receiving instruction in the Diamond were injured. Both aircraft had just landed after local flights and both sustained substantial damage. Visual conditions prevailed.

After landing on Runway 11, ATC cleared the Piper to turn left onto taxiway C2, and then taxi back to the approach end of Runway 11 and hold short. While the Piper was taxiing, the Diamond landed on parallel Runway 12. It cleared at taxiway A3 and held position. After reaching the approach end of Runway 11, ATC cleared the Piper to cross the runway and hold short of Runway 12 at taxiway C3. After reaching Runway 12, the Piper was cleared to cross it and contact ground. The Piper crossed Runway 12, entered taxiway A3 and struck the Diamond, which was still on the taxiway.

The airplane was destroyed by impact and a post-crash fire when it collided with terrain at about 1715 Pacific time, shortly after takeoff. The solo private pilot sustained fatal injuries. Instrument conditions prevailed; an IFR plan had been filed.

The pilot received an IFR clearance at about 1700, which included a void time of 1710. The airplane departed Runway 11 and climbed to about 300 feet agl before initiating a shallow left turn and disappearing into the fog. A witness reported the engine sounded “strong, smooth and normal.”

The wreckage was located about two miles northeast of the departure airport at an elevation of 307 feet msl. The airplane impacted a soft, muddy field in a near-vertical attitude on a heading of about 200 degrees. All major components were located at the main wreckage site. Weather observed at the departure airport 20 minutes before the accident included calm winds, -mile visibility in mist and an overcast at 600 feet.

At about 1653 Eastern time, the Canadian-registered airplane was substantially damaged during a hard landing following deployment of its airframe parachute. The Canadian-certificated private pilot and two passengers were not injured. Instrument conditions prevailed; the flight operated on an IFR flight plan.

The airplane was in cruise at 9000 feet msl, 1000 feet above clouds, when ATC requested a temporary heading change. After the flight was cleared back on course, the pilot reportedly had difficulty configuring the autopilot. By the time he returned his attention to the flight instruments, the airplane was descending out of control through clouds. The pilot also reported the glass panel’s depicted horizon did not appear correct. The pilot activated the Cirrus Airframe Parachute System.

The airplane descended via parachute and landed upright in a field, sustaining substantial damage. After all occupants egressed, wind gusts filled the parachute and inverted the airplane.

The airplane was destroyed when it impacted terrain at about 2048 Mountain time, shortly after taking off. The airline transport pilot, student pilot and four passengers were fatally injured. Night visual conditions prevailed. The inbound flight earlier that evening was the pilot’s first in the airplane.

Video surveillance footage appeared to indicate the airplane’s wings were rocking during and shortly after lifting off from Runway 3. A traffic camera about a half-mile northwest of the end of the departure runway recorded the airplane in a left bank. As the turn progressed, the bank angle increased and the airplane started to descend. The wings became nearly vertical and view of the airplane was lost. A witness did not hear any unusual sounds or see the airplane emitting smoke, fire or vapors, and stated the engine’s sound was typical.

At about 1032 Central time, the airplane impacted terrain. The solo commercial pilot was fatally injured; the airplane was destroyed during a post-impact fire. Visual conditions prevailed.

A friend of the pilot reported the flight’s purpose was to accumulate additional time on an overhauled engine installed in September 2017. A witness saw the airplane flying at about 1500 feet agl with no appreciable engine issues. As he continued to watch the airplane, its engine began to “struggle” for about 10 seconds before a total loss of power. The witness remarked that the airplane was already engulfed in flames as it descended rapidly into terrain. The airplane impacted in a 20-degree nose-down attitude.

The airplane lost engine power during a visual approach at about 1048 Mountain time. The pilot made a forced landing in a residential area three miles from the airport. During the landing, the airplane struck an embankment and was substantially damaged. The pilot and one passenger were not injured, but another passenger received a serious injury. Visual conditions prevailed.

At 2054 Eastern time, the airplane was destroyed when it impacted terrain. The solo private pilot was fatally injured. Night instrument conditions prevailed; the flight was not operating on an IFR clearance.

While flying a relatively short route, the airplane climbed to 11,500 feet msl before descending to 4300 feet at 2044. The airplane remained at 4300 feet msl until 2053, when it entered a descending left turn. Radar contact was lost at 2054. Weather recorded about 13 miles northeast of the accident site included wind from 020 degrees at four knots, visibility of 2 miles in rain and mist, and broken clouds at 700 feet. The pilot did not contact Flight Service or DUATS for the accident flight.

The airplane impacted terrain at about 0630 Eastern time. The commercial pilot and passenger were both fatally injured; the airplane was substantially damaged. Instrument conditions prevailed; the flight operated on an IFR flight plan. While in cruise flight, the pilot requested a descent after encountering icing conditions. The airplane’s descent continued and then it dropped off radar. The airplane impacted a lightly wooded area and came to rest upright. A post-crash fire ensued.

At 1103 Eastern time, the airplane experienced a catastrophic failure of its left engine, a CFM International CFM-56-7B. The engine inlet and cowling were damaged and fragments struck the wing and fuselage, resulting in a rapid depressurization after a window failed. The flight crew conducted an emergency descent and diverted. Of the 144 passengers and five crewmembers aboard, one passenger was fatally injured and eight passengers received minor injuries. The airplane sustained substantial damage. The aircraft was operated by Southwest Airlines as a Part 121 scheduled passenger flight.

The airplane impacted terrain at 0843 Eastern time. The private pilot and one passenger were fatally injured; the airplane was destroyed, and a post-impact fire consumed most of the wreckage. Instrument conditions prevailed; the flight operated on an IFR flight plan.

At 0828, while en route at 6000 feet msl, the pilot requested to divert to a nearby airport due to ice accumulation on the airplane. The controller cleared the flight to 4500 feet, the lowest altitude available in the area. At 0842, ATC advised the flight had passed through the localizer for the ILS approach; the pilot requested radar vectors to reintercept the localizer. At 0843, radar contact was lost. The airplane impacted a field 9.5 miles from the divert airport. The pilot’s weather briefing included active Airmets for moderate icing, IFR/mountain obscuration and low-level turbulence.

At about 1700 Eastern time, the airplane sustained substantial damage when it impacted a taxiway following a loss of directional control during takeoff. The airline transport pilot and three passengers were not injured. Visual conditions prevailed.

After landing on Runway 31, the pilot set the flaps and advanced both throttles to takeoff power for a touch-and-go. Shortly after, he felt the airplane yaw to the right, observed an over-boost indicator light for the right engine and lost control of the rudder/steering as the airplane exited the runway. The pilot regained control, reduced both engines to idle and attempted to stop the airplane. It struck the edge of a taxiway perpendicular to the airplane’s direction of travel and became airborne before landing on the opposite side of the taxiway. All three landing gear collapsed; the airplane came to rest upright.

The airplane was substantially damaged at about 1550 Eastern time after it lost engine power. The solo airline transport pilot lost control and the airplane impacted water. The pilot was seriously injured. Visual conditions prevailed.

According to a witness who observed the entire accident sequence, after making the first takeoff and experiencing a loss of engine power on initial climb, the pilot made a 180-degree turn, returned to the airport and landed. After troubleshooting and maintenance, the engine was run at various power settings with no anomalies noted. During initial climb after takeoff, the airplane appeared to stall after experiencing a loss of engine power, followed by the left wing dropping. The pilot recovered the airplane to a wings-level attitude, but it impacted water in a flat, “belly-flop” attitude.

“The airplane descended via parachute and landed upright in a field, sustaining substantial damage. After all occupants egressed, wind gusts filled the parachute and inverted the airplane.”

New data published by the NTSB includes general aviation accident statistics for the 10 years ending in 2015. At right, we’ve reproduced an NTSB chart detailing the total and fatal accidents rates for personal flying, 2006 through 2015.

Over the period, both total and fatal accident rates are fairly flat, with preliminary data since then displaying improvements. Note that activity data for 2011 is not available and accident rates for that year cannot be calculated.