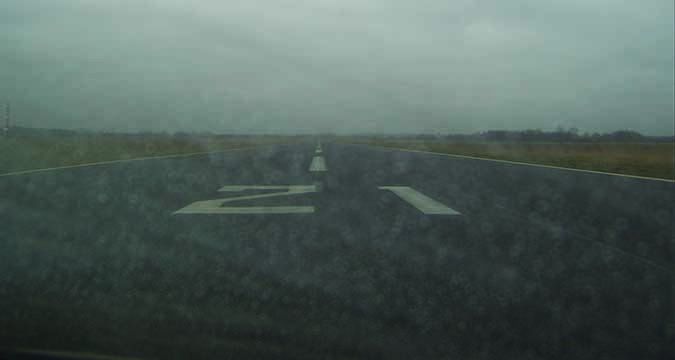 It was your basic dark and stormy night. The summer afternoon’s thunderstorms had long since begun dissipating and what remained of them had all moved away from my destination. The only weather was a stratus deck they left behind, which extended down to 2000 feet agl or so above the VFR-only airport. It was dark, the sun having long since set. And I admit it—I wanted to get home and sleep in my own bed for a change after more than a week on the road.

But my destination had little to offer in the way of facilities except relatively dim and sparse runway lighting. No beacon, no VASI and, of course, no published approach. Despite the pilot-controlled lights, the area around the runway was relatively dark—it was a classic “black hole” approach to land there at night—and trees on three sides of the runway meant I had to be close-in to spot it. Class C Regional was only a few miles away, with an ILS and GPS approaches, a control tower, radar, fuel and rental cars. Going there was Plan B if I couldn’t get into Plan A. What to do?

I had planned for this, since my day got off to a late start, pretty much ensuring a nighttime arrival. I had at least three hours of fuel aboard, thanks to an en route fuel stop. Although I would log more than seven hours of flying for the day by the time the airplane was tucked away in its hangar this night, I was relatively rested and hydrated. The airplane was in great shape, with everything, including all landing lights, in good working order. And I knew the runway and its environs well.

The surrounding terrain offered only one worrisome obstruction. It was tall and well-lit, and in my avionics’ obstruction database, but it also was the controlling obstacle for the 2700-foot minimum vectoring altitude to the north of my destination, the direction from which I was arriving. Thanks to other traffic demanding the controller’s time, I was still in the soup at 2000 feet and well past the obstruction when my moving maps told me I was overflying the destination. Looking out and down, all I could see was the strobes and position lights reflecting from the inside of the clouds I’d been in since leaving my cruising altitude some 20 minutes earlier. I needed a lower altitude before I could spot the runway, assess whether I could reasonably execute a traffic pattern and land, and make the decision to go for it or divert.

The controller finally was able to clear me to the locale’s minimum vectoring altitude (MVA—see the sidebar on the opposite page) of 1600 feet msl and soon I broke out of the stratus layer into good VMC underneath. I could see a few lights on the ground, but the runway was out of sight, behind me. Since I was still IFR and on a vector, I couldn’t just go zooming around out here, looking for the airport, without canceling IFR. And I didn’t want to cancel until I was relatively sure I didn’t need it anymore.

Realizing all this, the controller—who had finally cleared his workload—offered a couple of vectors that changed my general heading from a southerly one to northerly; essentially he put me on a very wide left base to the westbound runway. As I crossed the runway’s extended centerline, I spied the runway lights off my left wing, reported the field in sight and cancelled IFR. After maneuvering around the pattern to land to the east and flying my version of a black-hole approach—establish the flare attitude at my chosen approach speed of 75 KIAS and manage the descent with power—I soon plopped the mains onto the pavement and the nosewheel on the centerline. Another long day in the airplane was over. And I was home. I love it when a plan comes together.

Given the relatively low ceiling, the lack of a published approach and my inability to spot the runway until I was almost on top of it, being vectored around at the MVA was the only way I was getting in there that night without some drama.

The sidebar above goes into some detail about MVAs. Several takeaways come to mind. First, MVAs are dynamic, and can change from time to time, as new cell towers, temporary cranes and even permanent structures are erected. Second, mere pilots are not allowed to see the kind of chart depicted above—they’re reserved for use only by the local ATC facility. To learn the MVA for a specific airport or location, you have to ask, preferably in real-time and on the frequency.

The third thing we need to understand is how MVAs and VFR weather minima can combine to trip us up if anyone is paying close attention. Using the circumstances of the arrival I just described—a 2000-foot msl ceiling with, say, six miles’ visibility, a 1600-foot msl MVA and a sea-level airport—what relationship do these numbers have to VFR minima in Class E airspace below 10,000 feet msl? Since the VFR minima include a requirement to remain 500 feet below a cloud when operating under VFR, I was technically too close to the overcast by 100 feet when I canceled IFR.

In the grand scheme of things, it’s not likely a fed is going to pop up out of the bushes as I roll out on the runway and cite me for violating that FAR. On the other hand, if I had descended to 1500 feet, then canceled IFR, I would have been off the altitude I was cleared to maintain. Which FAR would you like to violate?

The solution, of course, is to request and be cleared for a visual approach from the 1600-foot MVA. Even if the destination doesn’t have a published procedure, the visual always is available if we can see the airport, and there’s the contact approach when we can’t. Once cleared for the visual, I could have descended to 1500 feet msl and canceled IFR, or gone ahead and executed the visual, which I would then cancel on the ground by telephone. Doing so ties up the airspace for the time it would take to make the call, but them’s the breaks—and that’s the system.

Arriving at a VFR-only airport in poor weather and/or at night adds complications to what likely has become our normal way of flying IFR. We have to find the airport on our own, even though ATC can vector us right over it. There’s no ILS or GPS procedure waiting on us, no vectors to final, there may not be a weather-reporting facility and we’re usually also on our own for traffic avoidance (though ATC occasionally will advise something like “numerous targets in the vicinity; they appear to be in the traffic pattern”).

Departures can be similar, because no one but us is responsible for terrain or obstruction clearance until we’re above a certain altitude. So checking for published obstacle departure procedures should be part of our normal pre-flight efforts when departing a non-towered airport, even if it has published approaches.

In a perfect world, some kind of procedure to align with the east-west runway and dump me off at some fixed distance and altitude—say, two miles and 1000 feet—would be a neat thing. Maybe I’ll cobble something together with some user-defined fixes when I have time. It wouldn’t be legal to use IFR, of course, but it would help me orient myself to the runway on the next dark and stormy night. In the meantime, I’ll have to settle for some well-done vectoring from the local Tracon and hope the weather is good enough to not only allow me to spot the runway from the MVA but also cancel IFR without violating the visibility and cloud-clearance rules for Class E airspace.

Until then, stumbling around at the MVA and then flying a visual/contact approach is the only real option if I want to retain the convenience and flexibility of IFR for my arrival and stay legal doing it.