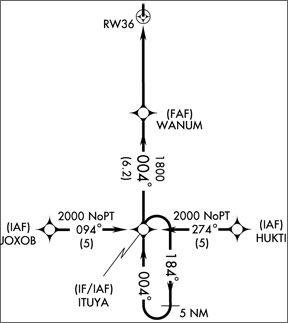 Where you are, smoking into your destination airport. Winds are calm, traffic is sparse, the ceiling is 1500 broken with good VFR underneath, youve got plenty of gas. But a close look at the approach plate creates confusion: Youre being vectored to a nearby fix, but its not at all clear how-or even whether-some kind of course reversal will be necessary. You certainly can slow down enough to easily nail the turn onto final, along with the approach, but something in the back of

your mind says it wont be that simple. Suddenly, it dawns on you: Youre going to need to execute a procedure turn.

A procedure turn is a means of aligning yourself with the final approach course inbound, when you have not been provided any other way of doing it. The basic technique is to cross the final approach fix (FAF), which serves as an initial approach fix (IAF) in this case, then intercept the reciprocal of the inbound ground track. Fly outbound for a minute, to give yourself room to turn around and get lined up inbound before crossing the FAF again. After that minute, turn 45 degrees, fly for another minute, make a standard rate 180-degree turn and youre automagically on a 45-degree intercept to the final approach course. You can also use this maneuvering time to descend to the proper altitude for the approach. Its a simple “procedure” that works.

The technique described above is not mandatory, however: You dont have to fly the outbound/turn/fly/turn around/fly/turn inbound sequence. Any means the pilot may use to get turned around to intercept the final approach course inbound is fine, as long as the airplane remains in protected airspace (usually within 10 nautical miles of the FAF) and turns take the airplane on the protected side, i.e., the side of the final approach course depicted on instrument approach charts. There are a couple other commonly taught (and flown) methods: the 80/260 turn, and the holding-pattern style course reversal.

With the 80/260 turn-sometimes a 90/270 turn is substituted-cross the fix and intercept the reciprocal of the inbound track. Immediately turn 80 (or 90) degrees toward the protected side of the course. As soon as you roll back to wings level, immediately enter a standard-rate turn in the other direction for 260 (or 270) degrees. Done right, this will have you lined up on the inbound course just outside the FAF. Its a quicker way to get turned around-and is a preferred military aviation technique-although things happen fairly rapidly so you need to be on speed, on altitude, in configuration and fully prepared for the approach before executing the 80/260 procedure turn.

When its a holding-pattern style course reversal. These are published when some reason (nearby airports, busy airways, restricted areas, etc.) requires the course reversal to be done in a smaller block of airspace, one too small for the traditional, 10-mile procedure turn. In those cases, a holding pattern is charted, usually at

the FAF. If the hold is depicted in lieu of a standard procedure turn, you are required to use the holding pattern-style course reversal technique to fly the approach.

This method also gives ATC the option of putting more than one airplane on the approach at a time, “stacking them up” as they used to say, at the final approach fix. One airplane turns inbound, and the plane above/behind it descends to intercept altitude for its turn at the approach. Airplanes are dealt off the bottom of the deck toward the airport.

A common mistake when encountering a holding pattern in lieu of a procedure turn is to think you must fly the entire holding pattern racetrack course; that is, enter the hold, cross the FAF on the inbound course, and then turn outbound again. This isnt necessary. In fact, if theres someone behind (or above) you on the same approach, turning outbound in the hold may put you in conflict.

If youre on-altitude and established on the inbound course when you reach the FAF, and youre cleared for the approach, press on and fly the approach. The sole purpose of the holding-pattern-style course reversal is to guide you through a turn inbound close to the fix, using a holding pattern entry technique to intercept the inbound course quickly from any angle.

When Holding Is Good

There are times you might want to stay in the hold when cleared for an approach. If your altitude is too high to safely begin the approach when you reach the FAF inbound; if your airspeed or airplane configuration arent as youd like; if youve not thoroughly briefed and set up for the approach; or if youre not quite lined up with the inbound course before you get to the FAF. In any event, ask ATC for permission to stay in the hold for another turn or two to get ready for the approach. You need to ask as early as possible, because there might be someone in line behind you. If you get permission, stay in the hold to get on altitude, airspeed, configuration and track before you press on inbound from the final approach fix.

Ask For the Procedure Turn

If youre proficient with procedure turn techniques, you might actually find yourself asking to fly the approach “own navigation” with a procedure turn when ATC offers radar vectors. Ive done it quite a bit. For several years I was flying a Beech Baron from an airport in eastern Tennessee. The airport was served by a single approach to Runway 3. I commonly flew across the hills into North Carolina and, on my return, would be arriving from the northeast, a thousand feet or so above the inbound-course altitude.

When in IMC, I could accept radar vectors to the final approach course, but ATC typically took me five miles past the FAF before issuing a turn to crosswind and then another onto an intercept to the inbound course. I had tons of time to descend to inbound altitude, once cleared to do so, but spent a lot of time flying along at low altitude.

One day, after several such arrivals, I asked ATC to go direct to the FAF and to fly “own navigation” for the procedure, and was granted the clearance. I then flew across the fix and onto a teardrop-entry for the holding pattern, using the outbound time to complete my descent to the inbound altitude. After about a minute I turned to align with the inbound course, on speed, on altitude and in configuration to continue past the FAF. In three or four minutes I could be over the FAF inbound, when radar vectors would have taken up to three times that long.

Actually having to execute a “for-real” procedure turn is rather rare in many areas of the country, and at the busier airports. Get off the beaten path a bit, or arrive after hours, when the nearby Tracon is closed, and youll be on your own. But youve done this before, at least once or twice, and its only a couple of turns, probably while level. Whats the big deal?

So dont think “oh no” when you might have to fly a procedure turn. Its an easy technique, given your flexibility about how it may be flown. And in some cases it may actually get you on the ground faster than radar vectors for the approach. Practice, and keep the various types of procedure turn in your bag of tricks for IFR flying.