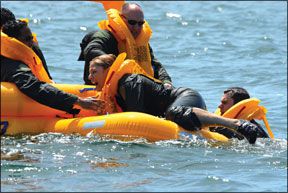 On December 4, 2010, a Piper Malibu, re-engined with a PT-6 turboprop under a supplemental type certificate, took off from Cozumel, Mexico, heading north. It never made it. Instead, according to press reports, more than two hours after takeoff and while in cruise at FL260, the turbine engine stopped producing power,

turning the pressurized single into a glider. It took about 25 minutes for the Piper to glide down to the Gulf of Mexico, where it was successfully ditched close to an oil rig. The ditching site was some 170 miles south of New Orleans, the planes destination.

The pilot and his three passengers successfully egressed the sinking plane and entered a life raft. Shortly, a boat from the oil rig picked them up; later the same day, a U.S. Coast Guard helicopter flew them the rest of the way to New Orleans. According to those same press reports, the four suffered nothing worse than minor injuries and arrived in New Orleans only six hours later than planned.

We should all be so lucky. No one intends to ditch their airplane, but stuff happens. If you plan to do any overwater flying, you obviously need some survival equipment other than what you keep aboard when flying strictly over land. Lets take a look at what you might consider, divided into three basic equipment groups.

Perhaps the most obvious piece of overwater survival gear is a life raft. Like airplanes, they come in various sizes and quality, and with different features. They also come from various sources, including the usual suspects-like Sportys Pilot Shop, and Aircraft Spruce and Speciality-plus a host of other vendors. If you plan to do a lot of overwater flying-“a lot” being a relative term-youll probably want to research the market and buy one suiting your needs and budget. Those who only casually-once or twice a year, for example-expect to be out of sight of land while in their airplane usually rent a raft.

Buying your own raft offers the greatest piece of mind, but also exacts a financial penalty in excess of its purchase price: Ideally, they must be regularly inspected and repacked to ensure optimum performance. That means shipping and service costs, plus being without the raft for however long the inspection takes. Replacing its consumables also will add to the expense of buying and maintaining a raft.

Renting a raft, on the other hand, may be the least expensive, but you may have little control over whats available and what ends up in the airplane.

Choosing a raft of the appropriate size also can be a challenge. Ideally, wed carry something bigger than the Queen Mary in our Skyhawk, but the physics laws have yet to be repealed. Instead, were stuck comparing things like seating capacity and packed size/weight to determine if theyll even fit into our flivver, what will be required to get them out the door and the payload penalty theyll exact.

The basic rule of thumb, however, is you want a raft accommodating more persons than your airplane can seat. Thats because life rafts are, well, small. Rather than literally laying on top of each other in a four-person raft, consider one designed for six. The cost/size/weight penalties arent that great, and if you ever need to be in it for a day or two, youll appreciate the difference. You also want to avoid the so-called “coastal” rafts, which are generally lighter in construction and lack a canopy.

Do you need a canopy? Not if you plan to get rescued immediately. But then, you didnt plan on ditching, either. A canopied raft offers protection from the sun, rain and ocean spray. Without one, youll be at natures mercy for however long it takes for someone to find you. While you might think returning from your ditching experience with a decent tan would be just the thing, the greater danger is hypothermia. A canopy will help reduce your exposure and help retain precious body heat in wet, cold conditions. You can go to a tanning booth when you get home.

Other considerations when choosing a raft include the number of air chambers in its design. More is better, since they can and do lose air or get punctured. A final option to consider is a boarding station-essentially a ladder-making it harder to swamp a raft while boarding it.

Neither this magazine nor sister publication Aviation Consumer have evaluated aviation life rafts since 2000. At the time, products offered by Winslow were top choices.

A final word on flotation devices: Buy and wear inflatable life vests when over water. That brand-new life raft could be swept away by a poorly timed wave and then where will you be?

If youve ever spent much time flying over water, you know anything smaller than a freighter is almost impossible to spot from altitude. Think about how hard to see your little life raft will be, especially at night or in poor weather. To help ensure getting found, you need to think about which signalling devices to carry.

Signal mirrors are light, dont require batteries and can easily fit in your hip pocket. They also dont have much range, can be hard to aim without some practice and may not float, depending on their construction. Thankfully and while they should be in your ditching kit, technology has raced ahead: Get a personal locator beacon (PLB).

A PLB is basically a portable emergency locator transmitter (ELT) but carried on a person and triggered manually. Since the 121.5 MHz frequency no longer is being monitored by satellites, were talking about 406 MHz devices using digital technology. Like rafts, PLBs come in many flavors, but for overwater flying you definitely want one designed to float. You also want one with a GPS receiver built into it, so it can transmit your location. When it last looked at these products, Aviation Consumer rated the GME AccuSat a top choice.

Another option is a tracking device, which uses GPS and a satellite transmitter to broadcast your position to a commercial service anyone you allow can access. A popular model is the Spot Satellite GPS Messenger. Another option is the Spider S3, offered by a New Zealand company, Spidertracks. Aviation Consumers December issue compared the two and there are significant differences-perhaps chief among them being price-with the Spot device and system being much less expensive.

While humans can survive and function for lengthy periods without food, water is essential. Unless you plan to ditch in a fresh-water lake, you should consider carrying some water. At slightly more than eight pounds per gallon, its heavier than avgas, but worth its weight in gold when you need it.

The higher-quality life rafts usually come with some apparatus to catch rain water. Purification tablets are useless in the ocean, but items like solar stills have value.

Food also is problematic. You want items low in bulk and salt but high in energy. If you or your passengers have dietary limitations, your task is even more complicated. Dont count on catching all the fish you can eat, nor sucking hard candy for a few days to give you all the nourishment you need.

Regardless of how much or how little overwater survival gear you decide is appropriate, there are two other things to keep in mind. First, all this stuff exacts a weight penalty. Be sure your anticipated overwater mission and aircraft can accommodate the people, bags and equipment your judgment deems necessary.

The other consideration is how and where to store it, both in and outside the airplane. Inflatable vests should be worn at all times when feet wet; the life raft should be at the main cabin-exit door, ready to be thrown out. When not planning to fly overwater, storing this gear in a hot or freezing hangar probably isnt the best idea. Take it home and store it all in a cool, dry environment.

Finally, as long as youre not operating for hire, the FAA does not require you to carry any overwater survival gear. Period. Not recommended.