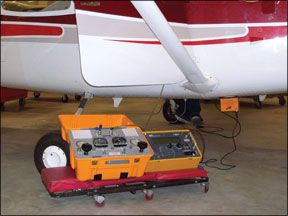 Aside from annual inspection, one of the most dreaded chores of aircraft ownership is complying with FAA-required pitot, static and transponder system recertification. You do comply, dont you? Maybe its the hassle of clearing your schedule to fly the airplane to the shop for the inspection. Or the bigger hassle when the inspection reveals problems that create unplanned expense because the huge amount of labor involved with static-system repairs can cost real money.

For the aging fleet of steam-gauge equipped aircraft, pitot/static systems and related instruments often require repair or rebuild. Many owners motor along clueless to their substandard system. Whether you fly VFR or IFR, a proactive and professional approach toward system upkeep is in your best interest. Heres why.

In case you arent familiar with the FAA rules governing the inspection, FAR 91.411 and 91.413 deserve a read. As an aircraft owner, its your responsibility to ensure the aircraft remains current per these regulations. This isnt an inspection thats accomplished during annual inspection but compliance is often verified as part of the annual. Some owners time the pitot/static check with the annual for convenience. This can be worthwhile-since the airplane is opened up for the annual, it could be easier to deal with problems that may be revealed.

If you dont operate IFR, your only obligation is to comply with FAR 91.413, which covers testing and certification of the transponder. The reg states, in part, that no person may use an ATC transponder unless within the preceding 24 calendar months it has been tested and inspected and found to comply with Appendix F of FAR Part 43. Notice the reg says nothing about testing or certifying the Mode C altitude reporting system.

It goes on to say, following any installation or maintenance on an ATC transponder where data correspondence errors could be introduced, the integrated system must be tested, inspected and found to comply with paragraph (c), Appendix E of part 43.

That second part of that regulation is one often dropped. What its essentially saying is that each time the transponder is removed for service it needs to be re-certified upon reinstallation in the aircraft. So if you pull the box, ship it to your favorite repair shop to, say, have an inoperative reply lamp replaced, you cant legally operate with it until its certified. If a shop installs a loaner while the original is being repaired, theyll need to certify the loaner unit in the aircraft.

For IFR operations, FAR 91.411 applies in addition to FAR 91.413. It covers the static system, altimeter and pressure altitude reporting system. In part, it says you cant operate the aircraft under IFR in controlled airspace unless each static pressure system, each altimeter instrument and each automatic pressure altitude reporting system has been tested and inspected and found to comply with appendices E and F of Part 43. And just as with transponder removal and service, any work performed on the instruments and aircraft static system-where opening and closing of the system occurs-also requires recertification. Thankfully, if you crack open a static drain you wont need to go through all this.

Like all others, some of these regulations are left open for interpretation, but theres not a lot of wiggle room. What is questionable is the level in which some shops perform the inspection, based on the condition of some static systems and logbooks weve eyeballed. Maybe they turn their heads to leakage and instrument error, or maybe the owner declined expensive repairs.

A Sharp Eye On The Altimeter

“How long is this going to take?” is the common question shops are hit with when customers bring the aircraft in for the testing. There isnt a correct answer. Pressurized airplanes with dual static systems and redundant instruments are what full-day certifications are made of.

One shop told us the only way they test and certify an altimeter is by removing it from the aircraft and testing it in a controlled shop environment. Another experienced and trusted shop tests in the aircraft. Regardless, all shops should let the altimeter sit for a while allowing the aneroid to settle. Most altimeter maintenance manuals require the altimeter to sit for six to eight hours. This isnt always practical out in the field.

Most pilots dont really understand why the altimeter is tested anyway, other than ensuring accuracy. Its more than that and boils down to several areas of potential error thats inherent to altimeters.

First, theres mechanical error, which can be caused by misalignment of gears and hardware transmitting expansion and contraction to the instruments pointers. Since this error isnt constant, its one of the reasons we set and eyeball the altimeter before flight.

Scale error is caused by irregular expansion of the aneroid cells. Its partially the data thats evaluated during the test and then recorded on an altimeter correction card affixed to the logbooks (each altimeter in the aircraft should always be mated with a correction card). This card shows the amount of correction needed at different altitudes and is proof that some altimeters are healthier than others.

Hysteresis error is a lag in indicated altitude due to the elastic properties of the material within the altimeter. This occurs after an aircraft has maintained a constant altitude for an extended period of time and then makes a large, rapid altitude change. For this reason, many shops wont begin the testing unless the aircraft has been on the ground for an extended period of time.

Installation error is caused by the airflow around the static ports. This error varies with the type of aircraft, airspeed, and altitude. The correction card combines the installation/position and the scale errors. Then theres case leakage which can be caused by faulty gaskets, the instruments glass face and broken casing.

Altimeters must be tested and certified throughout their entire range. For example, a 35,000-foot model must be tested to that pressure altitude even though the airplane has no chance of ever flying that high. FAR 91.411 is often called a “correspondence” test because the shop ensures the aircraft altimeter corresponds with the calibrated master altimeter in the test equipment. This is perhaps the most time-consuming stage of the testing.

When testing Mode C altitude reporting, the difference between the automatic reporting output and the altitude displayed at the altimeter shall not exceed 125 feet.

If you want to save time and money on pitot/static certifications, ensure the aircraft logbooks are in order. A huge percentage of aircraft have insufficient and questionable logbook entries lacking altimeter correction cards. Some entries are missing instrument part and serial number nomenclature.

One reason some shops remove the altimeter is to verify and record this information, as well as check the instruments mod status from the data tag. They should also be checking for any outstanding ADs. Thorough records allow a shop to cut to the chase and get to the business at hand-which is ensuring the equipment is functional. Time wasted accessing and removing altimeters and

Even unsuspecting newer units can be hit by mandatory service mods, requiring removal and record logging. For instance, earlier Garmin GTX330 Mode S transponders were hit by a mandatory service bulletin requiring an inconvenient trip to the factory to address a potential suppression problem. This service bulletin, 0714, Rev. A, is covered under warranty but must be complied with before the next 91.413 sign-off. If the compliance wasnt logged in the books, its extra work for someone to research. And finally, do your shop a favor and show up for the test with the logbooks so the shop can sign it off at the end. Theyll also appreciate having all of the serial numbers handy before starting the work.

Having the testing consistently accomplished by a thorough shop has its benefits. Sometimes it may seem like a shop is being picky or even hard-nosed when it comes to certification standards. Good shops will suggest compliance with both regulations even though you only operate VFR. Ignoring the static system and related instruments is asking for trouble and is what neglected aircraft are made of.

Experienced shops can usually spot these nightmares from across the ramp. These are the airplanes that have been pencil-whipped for years (or perhaps not tested at all). Weve seen it a thousand times: A new owner brings in the airplane for the check and the static system leaks as if its wide open, the Mode C is off several hundred feet and the altimeter has large amounts of friction and case leakage. Dont forget the transponder-it has to fall within a tight spec, also. FAR 91.413 includes testing for transmit output power, frequency, side-lobe suppression and a host of other technicalities.

As for static system leakage, nearly all systems leak a bit. The specs allow for no more than 100 feet per minute at 1000 feet above field elevation. Any more and the technician is in troubleshooting mode. Pilots likely have no idea theres leakage in the system. A tell-tale sign is condensation inside the instruments. As warm cabin air heats the cool, moist air, instruments may fog.

Safety aside, non-compliance with 91.411 and 91.413 is a set-up for hassle and FAA enforcement. We recall an owner who came sliding down an instrument approach in actual conditions and took an unexpected trip off the runway after plowing through some runway lights. When the FAA started sifting through the aircraft logbooks they discovered both inspections were overdue.

But this minor fender bender is trivial compared to the potential disaster caused by an altimeter with excessive friction or error. Imagine arriving at minimums with an altimeter that says you are 200 feet higher than you really are. Or operating with altitude reporting thats a few hundred feet off in tightly stacked airspace. These are just a couple of reasons why the pitot/static check shouldnt be taken lightly.