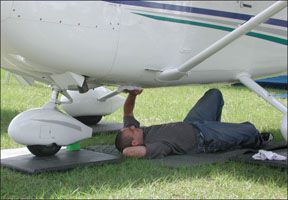 Youve just completed the perfect flight, followed by a great landing-youll be able to use the airplane again-and the bird is secure in its hangar. All is well. Or is it?

What about that intermittent vibration you imagined? And, was the oil pressure needle sitting a little lower than normal, while the oil temp gauge registered high? Did the airplane use the same amount of fuel as predicted by the manual and confirmed by the instrumentation? Is there any paperwork necessary after the flight?

These and other questions can be answered with a quick walk-around of the airplane, by peeking under the cowling for a moment, by making a few notes in a flight log and by checking the fuel remaining. All of these steps are part of the post-flight inspection you may want to consider performing before putting your pride and joy away for the night. Heres how.

In The Cabin
Your post-flight inspection really begins as the engine(s) shudder to a stop and the gyros wind down. This is when you want to assess how well the airplane performed during the flight.

I keep a simple flight log on which I note the date and arrival airport, plus the tach time, the amount of oil I added before the flight and any notes I care to make about failed or intermittent equipment or unusual operational issues. This is also a great opportunity to compare the tach time to any cheat sheet you may keep in the airplane or the hangar reminding you of when oil changes or recurring inspections are due. Such a log is also a good place to record the required VOR accuracy checks, as well as noting when any installed databases are due to expire. Of course, updating a database for an installed piece of avionics requires some record, also.

If you have a fuel totalizer or other hyper-accurate quantity indicating system, you may also want to note what the instrument says about the total fuel burn or fuel remaining. Compare this value to the fuel put in to determine if there is a major discrepancy. If there is, its probably something youll want to investigate before the next flight.

Before unbuckling, stow any loose charts, flashlights or other items you want to leave in the plane. Headsets, kneeboards, sunglasses and portable navigation or audio devices should be either disconnected and readied for removal from the cabin or put back in their proper location. Not only do you want to make sure they are where they should be for the next flight, but its embarrassing to snag a cable or two and get trapped in your own airplane when trying to climb out. Non-flying passengers tend to look askance at a pilot who gets entangled this way. Dont ask me how I know this.

The Big Picture
Its really amazing how many issues with an airplane one can spot from a distance. The airplanes general condition, plus tire pressure and strut inflation, among other items, are readily apparent when walking to it across a ramp. The same is true after a flight.

Once parked and out of your bird, step a few yards away from it and walk around. Admire it if you will, but the idea is to critically assess what, if anything, may have changed with it during the last flight. Is there any fuel leaking from drains or caps? What about a new oil deposit on the belly or the nacelles? How many bugs did you fly into, and what will it take to get them off? (Hint: Theyre much easier to remove when fresh than when theyve been baked in the sun for a few days.)

Are all the gear doors as they should be? What about the antennas, static wicks, placards and various inspection covers-still present and accounted for? Cowling fasteners still doing their job? What about deice boots or other exterior equipment; does they look as they did before you took off? Is there any mud or dirt you carried back from that grass strip that should be cleaned up?

These are the kinds of things to look for on what Ill call a big picture walkaround-ensuring all the big parts are still attached. By doing so, and identifying anything thats missing, misaligned or just not right, youll have ample opportunity to correct it before youll need the airplane again. You also can avoid the nasty and expensive surprises that might come with the next pre-flight inspection. At a minimum, you can get your mechanic to check out things and order any parts necessary for repair or replacement and, possibly, save some bucks by shopping around for the best prices and avoiding overnight shipping fees.

Servicing
Once weve cleaned up and organized the cabin, plus verified the airplanes exterior is as it should be, its time to service our bird and replenish the fuel, oil, oxygen, deicing fluids and other consumables we used on our flight. While not exactly controversial, some argue that only fuel and not oil should be added during a post-flight; others maintain everything should be topped off.

The rationale for not adding oil involves the likelihood that not all the engines oil has yet drained into the sump. By adding oil now, you could be overfilling the sump with oil that will simply be blown overboard during the next flight. Thats wasteful and can make a mess. The engine is also hot from the last flight and checking/adding oil to it can mean burned fingers. I leave this task to the preflight inspection.

Still, popping open the cowling is not a bad idea, although it can be a lot of work for some airplanes with one-piece designs. At a minimum, open the oil access door and take a quick look for any obvious fuel or oil leaks.Looking up from below the cowl flaps, if any, or through the front of the cowling is also a good idea. Again, youre looking for any obvious leaks or components, like hoses, that arent where they should be be.

The question of whether to add fuel now or during the preflight is less controversial. The only time I decline refuling is when Im not sure of the outbound load and may need some air in the tanks to remain below gross weight. Of course, the way fuel prices have kept increasing lately, it might be a good idea to top off now, rather than wait-you could save real money by beating the next price hike.

Finally, a post-flight inspection is a good time to clean off any bugs or other contamination on the airframe. Use a bucket of warm, soapy water if its available or a good-quality automotive cleaner and some elbow grease. No matter what cleaning product you use, be sure its appropriate for your aircrafts structure (aluminum, composite, etc.).

Securing
Everyone has their own preferences for how they secure their airplane. Some will install a control lock even if the plane is in a hangar. Others swear by fabric cabin or canopy covers in lieu of reflectorized sun shields installed on the windows interior.

I have both a cabin cover and sun shields, though I rarely carry the shields. Theyre great for quick turns or overnights in sunny climes, but the cabin cover is often easier to install. Plus, it prevents the sun from reaching the Plexiglas windows, which can lead to clouding. To each his or her own.

One thing I religiously do when putting my plane back in its hangar is chock it. Some hangars are notorious for air and wind leaks-mine is one of them and a stiff breeze could push the airplane somewhere I dont want it.Too, I have a bunch of other stuff stored in my hangar that can make it a tight fit.

Tying down an aircraft is another area where many seasoned owners will find disagreement, especially in the type and quality of rope used and how its knotted. Others will swear by chains. Rope advocates argue that the flexibility their favorite tiedown method affords will help prevent damage to the airframe. Those who prefer chains point to inconsistent and poor knots, plus low-strength rope, as major causes for aircraft to come unmoored during heavy weather.

My bottom line is to use good-quality rope or chain and make sure the knots or chain fittings are well-done. That said, a lot of tiedown mishaps-almost always at airshows or transient ramps-involve poor anchors.

The one thing I wont do is trust old, ratty-looking cotton rope. Get some new nylon line or even tiedown straps to secure the airplane and carry it with you for those transient ramps where the ropes were last replaced during WWII.

Another thing I regularly do when overnighting outside my hangar is install cowling plugs and a pitot cover. Both have bright red Remove Before Flying streamers on them and are made from heavy-duty vinyl. The streamers can flap around in the wind, especially the one on the pitot cover, so I wrap it around the tube and tie it into a slip knot.

Ensure your cowling plugs fit tight enough to do the job for which they were designed: keeping out trash, dirt and birds. If you have an odd airplane or cowling, you may need to make your own from some thick foam rubber. If you do, be sure to engineer some kind of streamer so you wont forget to remove it some dark night.

From here, the skys the limit. In areas like Alaska, youll see fabric wing covers, tire shrouds and wing-top spoilers, designed to prevent a stiff breeze from flying a taildragger. If youre flying a tall amphibian or something really odd or old, there are any number of other additions to these recommendations youll want to make.

Bottom Line
Once the engine sighs to a stop, its up to you to ensure the airplanes ready for its next flight. You can backload it all by doing an extensive pre-flight inspection, or accomplish a lot of it by taking a few extra minutes before leaving the airport to clean up the things that got dirty and make sure youve done as much as you can to prep for the next flight. Its your call.

Also With This Article
“Post-Flight Checklist”
“What Am I Looking For?”