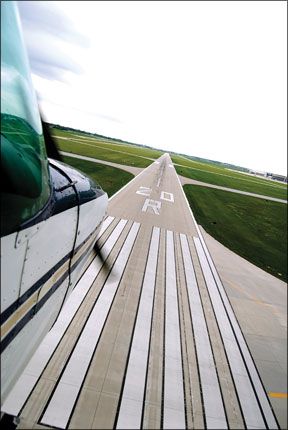 Takeoffs, as a friend and CFI likes to inform her students, are optional. Landings, however, are mandatory. Within the soaring community, the line was “Get one free landing with every takeoff!” And therein is the most sobering aspect of facing a power-off landing: the reality the old stand-by go-around option we enjoy for other situations is eliminated. So while making all the usual efforts to restart an engine after it stops, the savvy pilot must simultaneously make a quick assessment of available options-and adjust to flying the aircraft as a glider.

That means trimming for best glide while working the restart prospects and looking for the best suitable landing area available. And you must take these steps quickly:

Altitude equals time to touchdown; the lower the failure altitude the less the time available, and the smaller is the radius of territory you have to consider. Gravity will prevail; your job is to make the arrival survivable, maybe even a great landing that leaves the airplane ready to fly again-once the engine problem is fixed, of course. Ultimately, an engine failure in a single-or, say, flameout of both engines after flying through a flock of birds-presents a situation demanding the best of your stick-and-rudder skills along with all your top judgment and experience.

Finally, and just to let you know up front, this isnt another foray into the debate about that toughest of all calls-whether to fly more or less straight ahead or attempt a turnback after a singles engine fails shortly after takeoff. For that, youll need to peruse several back issues of this magazine, starting with January 2006 and working forward. Instead, youll find here the tools you need any time an engine stops later in the flight.

A successfully executed power-off spot landing involves several steps: seeking, designating and reaching a field, maybe while still thousands of feet up with miles of gliding to consider; maybe with under a mile and less than 1000 feet. All of this will be occurring while the pilot is configuring the airplane-gear, flaps, etc.-plus the cabin (e.g., seat belts/harnesses, stowing loose items) and trying to restart the engine.

At 1000 feet agl, you realistically dont have a full minute; at 8000 agl, you may have as much as 10. In either case, the urgency remains the same. Under the usual power-off training we receive, the drill usually begins when the dastardly CFI pulls off the power near a field within easy reach-sometimes directly below us. Instead of being completely dead, the engine is idling, and usually cleared a couple of times on the way down-adding a burst or two of energy-lest the practice turn into the real deal.

In any event, the engine happily provides some residual thrust instead of drag, distorting the glide and speed experience compared to the numbers behind a dead engine with a windmilling fixed-pitch prop. The same is true for airplanes with constant-speed props, except they should be pulled into high pitch/low rpm-both during practice and for the real thing-to reduce drag.

Try it sometime: The difference between the two settings is stark and you can feel the airplanes acceleration as the props drag is reduced. (Just dont forget to return the prop control to the low-pitch/high rpm setting before adding back power for the go-around.)

The point of all this practice is learning to handle the plane and judge when and where to make our turns, configure the airplane, etc., so we can reach our intended landing area. But, while certainly better than doing nothing at all, these sorts of power-loss drills fall short in helping us develop some of the simple, more-concrete skills and knowledge commonly maintained by sailplane and hang-glider pilots-whose every landing is of the power-off variety.

If youre blessed with one of the marvelous area-navigation systems of the past 20 years, chances are it came with the ability to call up the 10 or so closest airports usable by your plane. So among all these things you need to do almost simultaneously, you need to activate that function-and when it generates its list, look for airports you can reach with the altitude available, something you should have learned from your CFI-inspired engine-out drills.

Even while evaluating what your panel-mounted or handheld magic box tells you, look outside; if youre adjacent to big fields but the closest runway is miles away, you justifiably may be tempted to use one. But before you commit to an off-airport landing right now-instead of gliding some miles to the nearest suitable runway-you need to have some idea of how far and long you can glide from your current height above ground: You need to know how your airplane glides engine-off, its descent rate at best-glide, and its engine-out best-glide speed.

For example, if your airplane glides best at 90 knots and descends at 900 fpm engine-off, you can make some useful calculations. To us, the most useful and important thing to establish is how much time you have. If your powerless airplane descends at 900 fpm, if youre at 10,000 feet msl, and if the terrain below you is at 1000 feet msl, the math is easy: You have 10 minutes before youll be on the ground, regardless.

At 90 knots, the airplane travels 1.5 nm/minute, so you can glide 15 nm during those 10 minutes. If your magic box tells you the nearest airport is 16 miles away, youll come up short unless you also have a tailwind going in that direction. Even then, youll have little altitude to play with once you arrive in the airports vicinity.

Will you be able to land straight-in, or nearly so? (Hint: If youve got a tailwind at altitude, you may also have a tailwind at landing. How good an idea that is depends.) If not, youll also need to have enough remaining energy to execute at least an abbreviated pattern. Since gliding that far and for that long requires the skill to nail your glide speed plus the discipline to fly the airplane while troubleshooting, finding the airport and its runway, alerting ATC or traffic in the area to your intentions and securing the cabin, how lucky are you feeling today?

The bottom line: Making an airport “only” 15 miles away may be pushing it, and things can get worse-turbulence, winds, etc. Making for an airport (or suitable field) at 10, 11 or 12 miles away-or less than 10-should be a safe bet. But only as long as youve got the full 10,000 feet to burn; if youre at 3000 feet msl over that same 1000-foot msl terrain, the picture is quite different.

Its all about situational awareness and knowing these numbers within the first few seconds after being forced to perform a power-off landing allow you make some quick calculations, even while youre digesting results from hitting the “Nearest” button. You might even want to make yourself a little cheat sheet from the numbers you discover in tests.

How to test? See the sidebar on the previous page for some tips. Or, you can climb to 10,000 feet agl directly over your favorite airport, shut off the engine and let her glide for two minutes of straight-and-level; restart, climb back, repeat, but in a standard-rate turn at best-glide speed-and measure the higher descent rate of the turn. Restart-or make an engine-out landing at the field beneath you. But dont try this until youve practiced some with the NIFA competition task (see sidebar at right). You might want to bring along your favorite CFI, also.

In most every engine-out situation, the pilot always has options and exploiting those options skillfully may help convert a potential tragedy into the relatively welcome hassle of coordinating the removal of an otherwise undamaged airplane from some open field. So lets go right to the big issue: space.

To safely land and walk away, the airplane needs about the same amount of space it usually needs for a regular landing, but well settle for a little bit less. We care not if its too short for a subsequent take-off-we need only to land. Bigger, of course, never hurts. And the less damage done, the faster the airplane returns to airworthiness. But big enough to land in is big enough.

Meanwhile comes the question of where on the chosen field were likely to land. As you should know from your primary training, “The Spot” is that piece of ground in your windshield that doesnt move; it merely grows larger. Any point youll overfly appears to move closer, toward and beneath the airplane; points too far to reach appear to move upward and away relative to the airplane.

That unmoving spot should be the first thing to look for if an available field isnt immediately beneath you-or, when you roll out of your turn to final at the runway or field of choice. Then, set up for the next closest suitable field unless the target is a gimmee.

If youre too high? Simple. Burn off altitude and distance with S-turns; altitude with slips; you can keep gear and flaps tucked away until needed to bleed off altitude, slow down, increase the descent angle and, of course, land. You usually dont want to end a successful engine-out approach with a gear-up-exceptions include water landings-so be mindful when flying outside your normal checklist routine.

Depending on the airplane and its sink rate, the goal is to arrive at your key position relative to the chosen landing area with 800 to 1000 feet of maneuvering-to-final room and speed. During engine-out practice, after closing the throttle and when abeam the arrival end of the runway, is when you learn to judge how and when to turn base and then final-depending on winds, of course. If needed, fly the so-called “carrier approach”-a continuous 180-degree descending turn from downwind to final. When appropriate, this maneuver can help you stay within gliding distance and let you burn off altitude more quickly without excess speed.

Finally, all practice should focus on trimming to and holding that best-glide speed throughout the maneuvering required to make the runway-or the field youve selected as the smartest choice.

Then fly that puppy all the way to the ground.