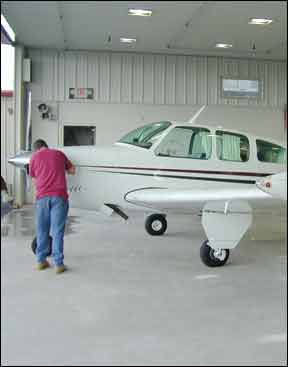 Kick the tires and light the fires” is one of the oldest sayings in aviation. Of course, it refers to sharply abbreviating the pre-flight inspection and introduces a rather cavalier attitude about ensuring the airplane is ready for flight.

But there often are times when we don’t need to perform the inspection detailed in the handbook, and other times we need to go way beyond it. How to know the difference?

Some Common Sense
Aircraft manufacturers would have us perform a recommended preflight inspection before every flight. Sometimes, that’s necessary and appropriate, especially when we’re unfamiliar with the airplane, it’s a rental and/or we find something on a cursory examination making us want to dive down deeper into determining whether the airplane really is airworthy. On the other side of the coin, you may want to go far beyond the handbook’s recommendations. One example is when the airplane is just out of the maintenance shop. The trick is knowing how close a look the aircraft really needs One answer is experience, but that’s not something all of us have in abundance. Another answer involves our familiarity with the airplane: When did it fly last? How has it been stored? If outside, what’s the weather been like since it last flew?

Knowing the airplane’s operational history helps in other ways, too. For example, if you know it burns a quart of oil every four hours, and you just landed after a three-hour flight, you know you’ll probably need to add a quart before the next one. Same thing for an airplane based at a gravel or turf strip: I’d want to pay close attention to the prop, the brakes and landing gear, the tires and the underside of the airplane.

If you’re getting ready to launch again after a fuel stop, there’s no real need to do the full walk-around. Yes, check the oil; yes, check the fuel tanks, and sump them to ensure there’s no water or debris, and the correct fuel was added. Next, ask yourself, “How was the airplane performing before I landed?” Was the oil pressure lower than normal? Any vibrations? Any controls seem to bind? How did the tires and landing gear fare on that last landing? If it registered on the earthquake scale, maybe now’s also a good time to double-check the security of inspection panels or compartment doors. What about the bugs on the windshield?

All these concerns and considerations should be going through your mind while munching a candy bar in the pilot lounge before climbing back aboard to continue your trip.

Big Picture
In our mind, the pre-flight inspection begins as we’re walking to the airplane. How does it look? Are all the big parts attached? Are the tires properly inflated? Is there obvious damage, ice and snow, or bird droppings? Are the windows clean and unobstructed? Any fluids on the ground obviously resulting from a leak?

It also ends in a similar fashion: We like to finish the walk-around by stepping back several feet, so we can see all of the airplane. When we do, we’re looking for wheel chocks the lineman put down when we weren’t looking, the towbar we left attached to the nosewheel, errant luggage, lost tools and other FOD, plus other loose items, especially anything behind the airplane likely to get blown somewhere after engine start.

In between, we’re considering the answers to various questions. When did the airplane last fly? If we just landed it 10 minutes ago, we don’t need to do an extensive pre-flight unless we encountered a problem. Even so, we rarely pass up an opportunity to check the fuel tanks for quantity and the cap’s security, or check the engine oil level. At least a glance at the engine cowling(s) is also appropriate, to see if there are any streaks left by leaking oil or other fluids.

Different Types
Some aircraft types demand different procedures and emphases when performing a pre-flight inspection. Many Bonanzas, for example, can collect water in the ailerons during even moderate rain. Obviously, extra weight isn’t something we want to carry aloft, nor does it do anything for the control surface’s balance. Tipping those ailerons up to their full wing-down position and allowing any water to drain out is a good idea.

Meanwhile, some airplanes’ cowlings aren’t designed for easy pre-flight inspections and must be removed to get a close look at the engine compartment. Others can be opened up from both sides, allowing easy access and inspection. Regardless of how your engine is cowled, finding a stray piece of straw or a feather—either of which can be a strong indications a bird’s nest may be hiding inside—is justification for grabbing some appropriate tools and removing the cowling for a closer inspection. Often, this is a two-person job when done right. If there’s no one around to help you, flying the airplane with doubts about what’s inside the cowling isn’t the smartest thing you can do. You really should wait until a helper arrives.

A final note about differing aircraft types: What’s a no-no on one model might be just fine on another. Going back to Bonanzas for an example, the V-tail models have a pushrod actuating the ruddervators. The “normal”-tail versions use a similar linkage. On the V-tails, the small bolt and nut assembly securing them to the control surface is supposed to freely rotate. On the other models, it isn’t.

Post-Maintenance
Most of the in-air issues we’ve had in various airplanes over the years occurred during the first flight after maintenance or inspection. We’ve discovered broken transponder antennas, mixture control linkages that weren’t attached, landing gear that wouldn’t retract, inoperative lighting and many more issues once airborne.

Of course, some of these discrepancies point to an inadequate pre-flight inspection, and we’d plead no-contest to such criticism. Others, like the landing gear that wouldn’t retract, couldn’t be duplicated on jacks; in-air aerodynamic loadings were required to find the problem.

The point isn’t that we’re fallible—that was decided long ago. Instead, the point is that—no matter how much you might trust and respect the persons performing the maintenance, stuff happens. It even happens to parts of the airplane which didn’t undergo maintenance or inspection. Prepping to fly after any maintenance—even the oil change you performed yourself—is just cause for a thorough inspection of the entire airplane and workspace. You could find a missing tool on the engine, a lost rag plugging an intake, or much worse.

Don’t Forget the Cockpit
Much of the emphasis on pre-flight inspections involves looking at and examining things on the airplane’s exterior, or under its cowling. But the front seat is where you’ll spend the next minutes of your life and it’s also where a lot of preflight inspections fall down from incompleteness.

For example, is the magnetic compass indicating roughly the correct direction? Is it filled with fluid, or has it all leaked out onto the glareshield? What about the required paperwork? You need an airworthiness certificate and a registration certificate, plus the POH/AFM, at a minimum.

Depending on the airplane and the manufacturer’s recommendations, you may want to energize the master switch—only after ensuring the landing-gear handle is in the “Down” position—and turn on various equipment, like exterior lights. You also may want to lower the flaps for inspection.

For a night flight, be sure to check the instrument and panel lighting for correct operation, as well as any lights the passengers may require. Same with flashlights. If you’ll be flying over water, check to make sure personal flotation devices are available.

Before leaving the cockpit and moving on to the exterior inspection, check the fuel quantity indicators and other instrumentation: Does the OAT read correctly? Is the altimeter believable? Is the VSI indicating zero, or some other value?

Some airplanes also have various items in the cockpit necessary for a thorough inspection. Examples might include a fuel strainer that only can be actuated from the cockpit. Meanwhile, some Pipers have plungers to drain the pitot/static system mounted on the cabin sidewall. Ideally, checking systems like these is a two-person job: Someone needs to activate the mechanism while someone else monitors the results. When we’re solo, some of this might not get done correctly.

Unless you want to check the exterior lighting, be sure to turn off the master switch before leaving the cockpit and continuing the inspection.

Not A Team Effort
Airplanes aren’t falling out of the sky every day because we missed things on the pre-flight. Still, we hear enough reports each year about pilots having to return immediately after takeoff for one thing or another that we’re not doing something right during our pre-flight.

In our mind, one of the most-important pre-flight actions a pilot can take is to shoo away all passengers and perform the pre-flight in solitude, even if they’re pilots and there “to help.” We can’t count the number of times we’ve gotten all buckled up and are ready to turn the key before someone asks, “Hey, did you check the cam on the frammis?” Invariably the answer is, “No,” or, “I don’t remember.”

Just like your first solo, the pre-flight inspection shouldn’t be a team effort. One individual should be responsible for conducting an appropriate walk-around. That’s you.