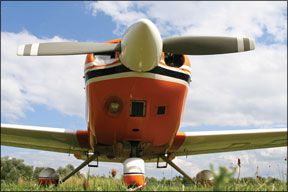 Unless youre among the small number of personal aircraft owners lucky enough to own a jet, your airplane has at least one propeller. It might be a fixed-pitch, metal or wooden affair, a multi-composite blade reversible spun by a turbine engine or one of the more ubiquitous constant-speed offerings from Hartzell or McCauley. And you might have more than one of them. No matter: Even a basic fixed-pitch model is a fairly expensive component, spinning away for hours on end, its tips approaching-in some cases exceeding-the speed of sound.

If you have a constant-speed or full-feathering version, you also have a small collection of very expensive and specialized parts regularly subjected to massive forces. Contrast all that with what many pilots seem to think: A prop is a poorly designed handle with which to help move the airplane back in its hangar. In fact, according to the pros, treating your propeller like the critical component it is and lending it a little TLC every now and then can go a long way toward preventing costly maintenance. Or worse.

The average propellers main enemy? Its not the wet-behind-the-ears private pilot who insists on using it to muscle the airplane in and out of the hangar. Its not even the guy who taxis over runway lights and into potholes while talking on a cell phone-more about him in a moment. Instead, prop shop managers and manufacturers reps tell us its aviations oldest bugaboo: corrosion. Look at just about any metal prop out on the tiedown line. Youll probably find its leading edge is rough, with small pits and-if it hasnt been painted recently-some whitish discoloration. Thats corrosion, and its slowly eating away at the prop.

A props other main enemy is the nicks and gouges picked up in normal operation. Along with the pitting from corrosion, these create stress risers, weakening the prop blade. Nicks and the resulting stress risers can result in cracked blades. In extreme cases, part of the blade can break off in flight, creating a severe out-of-balance situation. If you catch it quickly enough and reduce power or shut off the engine altogether, the engine might not shake itself to death and the prop might stay on. Either way, youre going to get some real-world engine-out practice and probably pay for an engine teardown.

In really extreme cases, the prop simply departs the aircraft. Not only are you finished producing thrust for the day, but the props departure can drastically alter the weight and balance situation, shifting the airplanes center of gravity aft.

Your IA will smooth the lesser nicks and gouges at the annual inspection. Larger ones are problematic: The temptation is to smooth them out, too, but they might be large enough to condemn the blade. To make the call, your mechanic must consult the prop manufacturers literature.

“Props dont usually break,” admits Ron Porciello of New England Propeller. But, he adds, “We have a problem out in the field. Theres a lack of knowledge on how to check a prop and what to look for.” And if most pilots preflight inspections are any guide, hes right. Sure, run your fingers along the leading edge, checking for abrasion and nicks. But what about corrosion or, in the case of a constant-speed prop, blade security and whats going on underneath the spinner? The box at lower left summarizes Porciellos suggestions.

Again, according to Porciello, finding someone knowledgeable may mean the local prop shop. “The average mechanics dont know a thing about modern propellers. They were trained on 1940-50s technology and a lot has changed since then.”

Some prop-related specs are readily available. For example, check your airplanes type certificate data sheet (TCDS) for maximum and minimum diameter specifications, plus pitch settings for a constant-speed model. If your airplane/prop combination is fixed-pitch, the TCDS also will include static rpm limits. Other specs, like minimum blade width, static balance and the like can only be found in the prop manufacturers literature. Few owners have gone to the trouble to obtain that material, and even their mechanics usually defer to the local prop shop.

What You Can Do

Keeping your prop happy between visits to the shop isnt rocket science. Keep it clean and free of corrosion with an oily rag, and have a competent technician smooth out any nicks or pitting. Keep it painted. If you insist on polished prop blades, youll be out at the hangar quite often, keeping corrosion away.

Pay attention when taxiing and during other ground operations, too. “If people knew how to fly and knew how to taxi, wed be out of work,” offered Porciello. Based on prop strikes alone, owning a prop shop is a “wonderful business,” he adds, since his shop sees three or four of them a week. And no aircraft type is immune: “We see Aerostars and Piper Cubs” getting involved in prop strikes, Porciello says. H&H Propellers Chris Yo agrees: “We had one guy in a twin who was trying to taxi and talk on his cell phone at the same time. He needed two new props, plus engine work.”

If theres a universal complaint among prop shops, its that owners basically ignore the manufacturers recommendations on maintenance intervals. In fact, New England Propellers Porciello says its not uncommon to receive props “25 to 30 years out of overhaul.” Of course, those are the extremes. Still, aircraft owners tend to their props last.

Of the “big four” propeller manufacturers-Hartzell, McCauley, MT and Sensenich-only Sensenich lacks a calendar-based maintenance requirement. That, according to General Manager Ed Zercher, is because his company only manufactures fixed-pitch propellers, where corrosion is the greatest long-term threat to airworthiness. Sensenich in 1999 revised upward its service interval requirements, from 1000 hours to 2000. One reason, Zercher admits, was to bring them in line with TBO limits of popular engines mounting Sensenich props.

For other manufacturers, most of which concentrate on constant-speed propellers, 72 months is the upper calendar limit and 2400 hours the maximum time-in-service before a prop mounted on a piston engine needs to see a shop. For some propellers-those Hartzells used in aerobatics, as an example-the TBO recommendation is 1000 hours or 60 months, whichever comes first. Another thing about Hartzells: Many hub models incorporate grease fittings. The company recommends greasing the hubs every 100 hours, which is something an owner with at least a private certificate can do.

For the most part, properly maintaining a propeller merely requires keeping it clean and corrosion-free, while ensuring it sees a professional every now and then. Be careful when inspecting it, of course, and pay attention when taxiing, especially on anything other than clean, dry pavement.